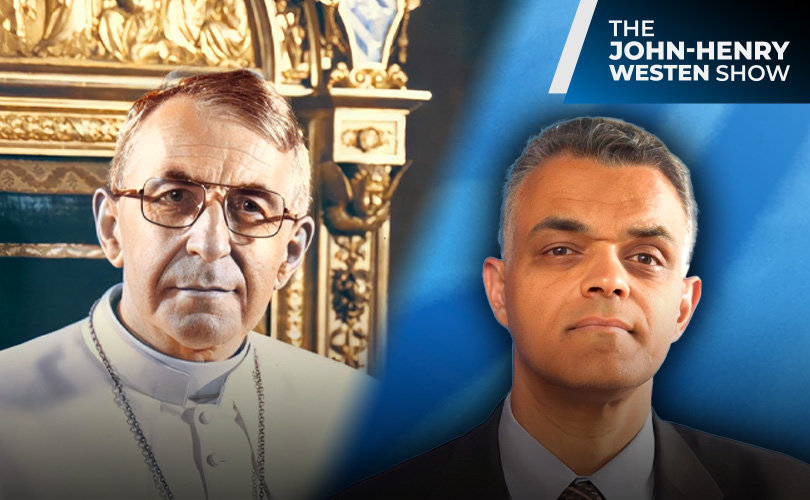 ROME (LifeSiteNews) — The last man to have spoken to Pope John Paul I, soon to be beatified, was a cardinal of the Roman Curia whom the Pope intended to remove from office because of his membership in Freemasonry. Just hours after a heated meeting with the cardinal in the Apostolic Palace, the Pope was found dead.

On September 25, 1978, a mere three days before the newly elected John Paul I would be found dead, the Holy Father met with Archbishop Edouard Gagnon. Fr. Charles Murr, Gagnon’s secretary, has detailed the circumstances of that meeting in a recent book titled Murder in the 33rd Degree. Murr spoke with LifeSiteNews editor-in-chief John-Henry Westen about what happened then and after.

At that meeting, Gagnon presented to John Paul I the findings of a three-year investigation of the entire Roman Curia that he had conducted at the command of Pope St. Paul VI. The investigation specifically sought to uncover the presence of any Freemasons within the Vatican offices.

Two men stood out in this investigation for the positions they enjoyed within the Curia: Archbishop Annibale Bugnini, the architect of the Novus Ordo liturgy, and Cardinal Sebastian Baggio, the head of the Congregation for Bishops, responsible for the nomination of bishops throughout the world. Under Baggio’s 12-year tenure, a retirement age of 75 was imposed upon the episcopacy, allowing him to nominate liberal-leaning bishops the world over. The membership of both Baggio and Bugnini in Freemasonry was confirmed by documentation verified as authentic by special agents of INTERPOL, the International Criminal Police Organization, according Murr’s testimony.

By 1978, because of involvement in Freemasonry, Bugnini had been sent by Paul VI to Iran as Apostolic Nuncio, where, according to Murr, it was thought he could do the least harm. Baggio, however, still held his Vatican post when John Paul I was elected to the Chair of Peter. His removal was among the foremost subjects of Gagnon’s meeting with John Paul I on September 25, 1978.

During that meeting, John Paul I agreed to deal with Cardinal Baggio and his membership in the Lodge, according to the testimony of Murr, who drove Gagnon to the meeting and spoke with him immediately after. Three days later, September 28, the Pope telephoned the Cardinal to come meet him that day. After responding that his schedule was busy, Baggio agreed to meet the Holy Father in his study that evening.

At 8 p.m. on September 28, Cardinal Baggio entered the Papal Apartments. No one else was to be present while two Swiss Guards waited outside the door. The time of day and the absence of others at the meeting were both unusual. The meeting lasted about an hour. The only testimony regarding that papal meeting came a few days later from one of the Swiss Guards on duty: that the angry voice of Baggio had been raised and could be heard through the door, suggesting a heated confrontation with the Pontiff.

“At 8:00 Baggio went up to the Holy Father’s residence in the Apostolic Palace,” Murr relates, “and was with him for approximately an hour. And there was shouting. Not the pope. The pope was not shouting. Baggio was shouting at the pope. How do we know that? I happen to know it. I happen to know. It was through a Swiss guard who was at the outside of the door. There were two Swiss guards. They reported this shouting. Baggio left. Furious. After an hour.”

John Paul I was found dead the next morning at 4:45 a.m. The official Vatican report as to the cause of his death changed several times. The last report was that the Pontiff suffered a heart attack during the night around 11 p.m. No autopsy or blood test was ever conducted.

The last meeting of John Paul I with Cardinal Baggio and the latter’s membership in Freemasonry have been kept hidden by the Vatican for decades. A Time Magazine article telling the story is the only evidence from the time that Fr. Charles Murr was able to recover as outside evidence. “The only place,” Murr says, “that I saw a report of the meeting between the Holy Father, John Paul I and Cardinal Baggio, Sebastian Baggio, was in Time Magazine. I have a copy of it. It cost me dearly to find.”

Murr alleges that the confrontation between the Pope and the high-ranking Cardinal, a member of both the Roman Curia and the Masonic Lodge, very well may have been what caused John Paul I to suffer a heart attack only hours later. But given the nature of the confrontation, Murr also alleges that the circumstances of the Pontiff’s death would qualify it as a Masonic murder.

“The Pope, who had a bad heart, is taking blood pressure medicine, I believe, because of that encounter, suffered a heart attack two or three hours later and died. Now you say, well, that’s not really a murder … I asked Cardinal Gagnon: Did he think that the pope was murdered? And he said, ‘You know, Charles. There are many ways of killing a man.’ I believe that’s what happened. I believe that’s the murder. That’s the murder that I’m talking about.”

Murr has called on the Vatican to release the investigative Gagnon report on the presence of Freemasons within the Roman Curia, including the documentation on Bugnini and Baggio. The call is especially pertinent given the upcoming beatification of John Paul I on September 4. The Gagnon report may shed light not only on the death of John Paul I but on the things that have thrown the Church into its current crisis.