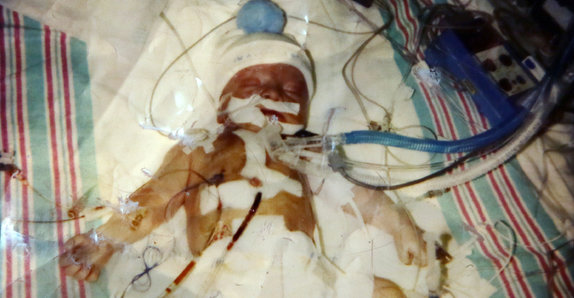 Zachary MacKenzie's heart was so weak that doctors thought he probably wouldn’t survive until birth. But even if he did, they said, it would only be a matter of hours before he died.

LAS VEGAS – Six months into Tracey Moran’s third pregnancy, she and her then-husband Mark MacKenzie received news no family wants to hear: their baby boy had a fatal heart condition, hypoplastic left heart syndrome.  His heart was so weak that doctors thought he probably wouldn’t survive until birth. But even if he did, they said, it would only be a matter of hours before he died.

Many women, faced with such a crushing diagnosis, choose to abort their babies. But not Moran – her faith prevented her from giving up on her baby.  She rallied her church family behind her and prayed nonstop for the little boy, whom she named Zachary.

On June 12, Zachary MacKenzie – now nearly nineteen – graduated high school, with his mother, father, and stepfather Mike Moran cheering him on alongside his three siblings.

In an interview with the Las Vegas Review-Journal marking the milestone, Tracey Moran credited her prayers and those of her fellow churchgoers at the International Church of Las Vegas for helping her son overcome the incredible odds against him to not only survive until adulthood, but thrive.

“I was six months pregnant when the doctors found out that he had a very sick heart,” Moran told the Review-Journal. “The doctors told me that there was no hope, that he would die his first breath he took.”

Moran refused to give her baby up without a fight, so at five hours old, Zachary underwent the first of three open-heart surgeries he would endure during his first three years of life.  It lasted eight hours, and after it was finished, the doctors warned Moran there was “no room for complications,” and that even with the surgeries, he was unlikely to live past the age of ten.

Because of the doctors’ pessimistic outlook, Moran spent Zachary’s childhood in a state of constant dread.  Fearing the worst, she even applied to the Make-a-Wish Foundation for a trip to Walt Disney World in Florida, which they took when Zachary was five. “I was always afraid I’d walk in there [to his bedroom] and not find him alive,” she told the Review-Journal.  “I’ve had to live with that fear all my life.”

But with aggressive medical care and constant prayer and vigilance on Moran’s part, Zachary not only made it to his tenth birthday, he’s about to celebrate his nineteenth.  Every day, he takes blood pressure medicine, medicine to help regulate his heartbeat and blood thinners to prevent strokes, but his teenage years have been otherwise mostly normal.  He can’t play contact sports or work out too strenuously, but he plays baseball casually, skateboards a little, and is very involved with his church.

Zachary told the Review-Journal the obstacles he’s faced in his young life have given him a strong faith in God.  “The way I think about it is this: Everything happens for a reason,” he said. “So, if I’m here, then I’m here for a reason. God put me here for a reason. … Thinking about all the things I’ve been through in my life, just thinking about everything, I’m surprised I’m still alive. That in itself is a miracle. There’s no way around it. No way would I be here, be alive, if not for God.”

Zachary will attend the College of Southern Nevada in the fall, but plans to transfer to the University of Nevada, Los Vegas (UNLV) later to major in criminal justice.  He would like to become a police officer.

To read the complete interview with the Las Vegas Review-Journal, click here.