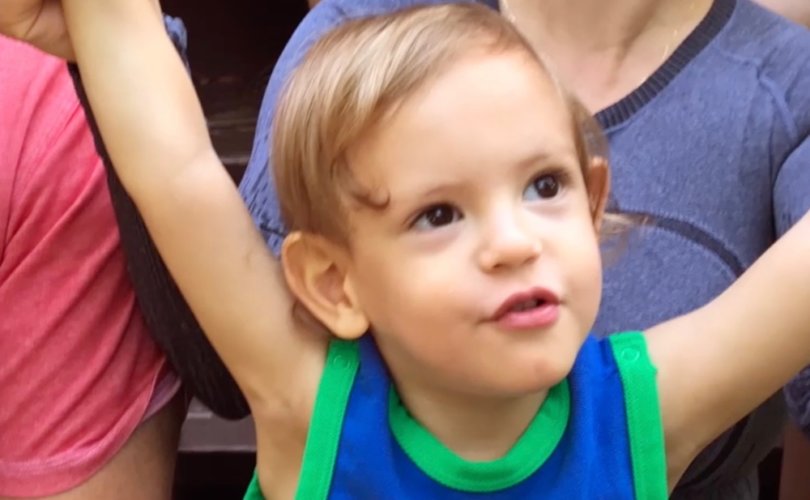 GLENVIEW, Illinois, October 8, 2018 (LifeSiteNews) – Responding to a continuing effort to normalize abortion, the producers of The 40 Film are again spreading the pro-life message through film and media.

Life’s precious nature is beautifully conveyed by Pro-Life Champions in the latest installment of their Shout My Story campaign. The new short film tells the story of a family who chose life despite being pressured to abort after receiving an adverse prenatal diagnosis.

Dan and Deborah FioRito weren’t prepared for Deborah’s water to break when she was pregnant at 21 weeks and five days, but the couple held together in faith and fought for their son, even when medical professionals told them their baby had little to no chance at life.

The Miracle Baby Thomas Story: One of the youngest premature babies ever to survive in the U.S. walks viewers through the FioRito’s journey of giving their son his chance at life in the face of tremendous odds.

Thomas, now two, healthy, and the youngest of nine, was born at just 22 weeks. His parents are convinced Thomas is a miracle and that his premature birth was part of God’s plan.

“Thomas is a testament to life,” said Dan FioRito. “And there’s a reason that Thomas was born the way he is, and I firmly believe it’s God’s will to affect others.”

Thomas’s story is the latest to be told by John and Cindy Morales, the couple behind Pro-Life Champions.

Their Shout My Story campaign is the pro-life response to Shout Your Abortion, an Oprah Winfrey-backed effort to celebrate abortion as normal and good.

“While our first story, the story of Mary Grace, was in production, we stumbled across the ‘ShoutYourAbortion.com’ website and we were horrified,” Cindy Morales told LifeSiteNews. “The pro-aborts had moved from ‘abortion is a tragic necessity that should be safe, legal, and rare’ to ‘Yeah abortion! Abortion is a positive good!’”

“We could not believe that no one had mounted a counter offensive, so we decided we should do it,” she said. “And thus ‘Shout My Story’ was born.”

Shout My Story looks to present positive hopeful stories of people who have chosen life, John Morales told LifeSiteNews, in contrast to the pro-abortion message.

Shout My Story is a full media campaign of short films, videos, audio, and print stories that Pro-Life Champions is making immediately available on all social media.

When it comes to filmmaking, Cindy and John unite their respective backgrounds in media, the pro-life movement, and faith formation. With their pro-life production team, they are writing, filming, producing, and editing five- to eight-minute films of life-affirming stories.

“The people we have filmed are joyful and at peace with their decision to choose life, and they want to share that joy and peace with others,” said Cindy Morales. “There are stories of women who have been pregnant by rape, whose children died soon after birth – and this was expected – and women who felt pressured to abort because of their financial situation or youth.”

“All of them want to give encouragement and hope to women in similar situations and to urge them to choose life,” she said.

Cindy and John hope their website will serve as a library of life-affirming stories in varying forms since they can’t film or even collect them all.

“We want hundreds of stories on our website, eventually, to counter the heinous Shout Your Abortion rhetoric,” Cindy Morales said.

Pro-Life Champions has collaborated with other pro-life groups to tell life-affirming stories, and the plan is to do so again in the future.

“Anyone who wants to help is welcome,” Cindy added.

‘This is God’s will’

Even when stories don’t have the archetypical happy ending, Pro-Life Champions conveys that all life is precious.

The first story they filmed, the story of Mary Grace, was about a baby diagnosed with anencephaly at 20 weeks gestation. Her parents, John and Molly Kurt, knew that her life would be short, Cindy explained.

“The message they wanted to give was, ‘her life was short, but she was loved, and she loved,’” Cindy said.

As the FioRitos encountered consistent pressure to abort after they got Deborah to the hospital, they had to process the possibility they might not have their son for long.

“They really painted a dire picture for our little guy,” said Dan FioRito.

It didn’t change their conviction to give Thomas however long a life God had planned for him. They asked for another medical professional who would respect their wishes.

“I told them, however this kid comes out, that’s God’s will,” Dan FioRito said. “And we’re going to love him. Don’t you dare discount that.”

Thomas was breathing on his own when he was born, and was intubated with some difficulty. He weighed one pound and two ounces.

Deborah FioRito recalled, “He was the tiniest thing.”

When he was released after 18 weeks in the NICU, Thomas weighed almost eight pounds. He went home around the time he was due to be born, without any oxygen support or a feeding tube.

After most doctors gave him no chance at life, his family considers him a miracle.

“Thomas came home to the madness of a big family,” Dan FioRito said, “and there was such joy, the true celebration of life.”

Thomas plays, talks, swims, and is very curious, like the other FioRito children are.

“Except he’s the miracle man, and the other kids know that,” said Dan FioRito. “Thomas is at the center of so much in the family. His older brothers and sisters cherish him and it’s incredible just to see the love that they have for him. And they never for get the small beginnings of Thomas.”

The FioRito family hopes they can encourage other families to fight for their children who doctors say may not viable.

Don’t let anyone convince you your baby isn’t meant to be here, they say.

The family’s pro-life convictions are only stronger having been through what they have with Thomas, Dan FioRito told LifeSiteNews, and their son is a living symbol of the pro-life movement.

“This is God’s will,” he said. “This is why Thomas came along the way he did.”

Pro-life stories can be shared with [email protected]. More information is available at ShoutMyStory.com.