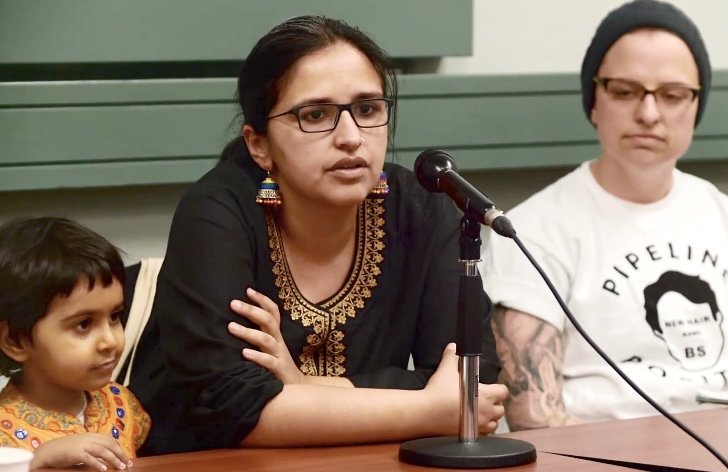 July 6, 2021 (LifeSiteNews) – The head of a Canadian liberties group openly called for violence against Catholic parishes in a social media post after the discovery of unmarked graves at now-closed indigenous residential schools once run by the church.

“Burn it all down,” tweeted Harsha Walia, executive director of the British Columbia (B.C.) Civil Liberties Association (BCCLA), on June 30 in response to a Vice News report on the burning of two Catholic churches.

Many took to social media to show their disbelief that the head of a well-known organization would call for destruction.

“I don’t understand why the ED of the BC Civil Liberties Assoc is calling for violence. Violence and hate don’t appear to be solutions being proposed by Indigenous communities, and it is their voices we should be listening to and respecting on this matter,” tweeted Nico Slobinsky, with a link to a screenshot of Walia’s tweet.

Rebel News founder Ezra Levant shared a video post and quote clip of Jenn Allan-Riley, whose mom was a residential school survivor and said she recently spoke with Walia about her comments.

“‘Her behavior is keeping that spirit of hate going … what you said is so damaging and dangerous in this country.’ — Indigenous leader to the settler bigot @HarshaWalia, the disgraced leader of the pro-violence @bccla,” tweeted Levant.

According to a Global News report, B.C. Public Safety Minister Mike Farnworth thought Walia’s tweet crossed the line. He said it was “just disgusting and reprehensible that somebody who heads up an organization like that would make such comments,” and was “vile beyond belief.”

“It does nothing to bring about reconciliation. All it does is create conflict and division,” added Farnworth, as reported by Global News.

According to the Global News report, Walia further took to Twitter to claim that it was “totally ridiculous to suggest I am actively calling for arson,” adding that “yes, I do think deadly genocidal colonialism locally and globally needs to collapse.”

However, the Union of BC Indian Chiefs (UBCIC) appeared to support Walia. The group has worked with the BCCLA on many files and said in a social media post that they stand “in strong solidarity with (Harsha Walia) in condemning the brutally gruesome genocide of residential ‘school’ system by Canada and Church while crown stole FN land.”

“You’re encouraging violence and hate and if that’s what you’re trying to do you have no business having any sort of platform whatsoever,” said Sankey.

On the BCCLA website, it says it is the “oldest and most active civil liberties and human rights group in Canada,” with many “pro bono” lawyers fighting court cases for “equality rights in relation to mental health, disability, gender, youth, immigration, refugees, race, poverty, LGBTQ2S+ rights, and more.”

More than 23 churches and counting

Intense media coverage of the unmarked graves at the now-closed Kamloops Indian Residential School located in British Columbia has resulted in at least 23 churches, most of them Catholic, having been either burned or vandalized.

Trudeau said it was is “unacceptable and wrong” for churches to be burned, but said also it was “understandable.”

A priest, who spoke to LifeSiteNews under condition of anonymity after the first two churches on indigenous land in British Columbia were set ablaze, said First Nations Catholics will suffer the loss of their churches and to “expect more” burnings to come.

The priest also stated why acts of vandalism against Catholic churches are not called out as hate crimes.

“Why is it when two Catholic churches are torched [as they just were], and it hits the news, the words are ‘police are investigating the cause … ’ but [when] a mosque or synagogue is burned, it’s a hate crime?” he asked, and then provided an answer: “It’s because there’s an unspoken prejudice that it’s OK that Catholics suffer.”