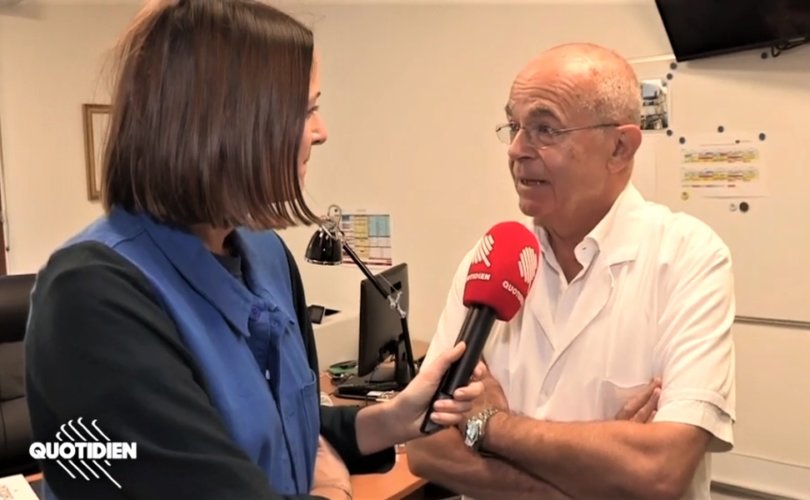 A French journalist from the Quotidien insists to obstetrician Dr. Bertrand De Rochambeau that a pre-born baby is not a human life during a televised interview.

BROU-SUR-CHANTEREINE, France, September 18, 2018 (LifeSiteNews) – A pro-life French obstetrician who described abortion as homicide is drawing fire from France's pro-abortion media and the country's government itself.

Even his own union is distancing itself from the pro-life physician's comments on abortion.

Dr. Bertrand De Rochambeau, president of France's union of gynecologists and obstetricians, stood up for his right to refuse to commit abortions in an interview with a French television reporter.

Reporter Valentine Oberti states in that interview that a conscientious objector clause to allow physicians in France to opt out of committing abortions is something that angers some people. In the interview, she also argues with the medical expert on air, insisting a pre-born baby is not a human life.

Broadcast last week, that interview on the Quotidien TV show includes a back-and-forth between the reporter and physician, who has performed abortions in the past but no longer does, which has incensed pro-abortion activists in France.

“I get up at all hours of the night,” says De Rochambeau in French in a videotaped segment of that interview. “I perform very difficult operations using my gut instincts. And those things which run counter to my beliefs, I do not do them. We are not here to end lives.”

At that point in the interview, the French reporter starts arguing back.

“When you say 'end a life,' a child yet to be born is not a life in the legal sense. It is not homicide to perform an abortion,” she counters in French.

De Rochambeau stands by his convictions. Raising his eyebrows, he leans in towards the reporter and says, “Yes [it is], Madam.”

The reporter refuses to let it go.

“No,” she retorts. “According to the Criminal Code, that's not the case. That's false.”

Purporting to speak for all women, effectively dismissing the views of all pro-life women everywhere, she maintains no pregnant woman anywhere considers an embryo to be a human life.

“No woman – and I am one – considers that having an embryo in her stomach, that's a life,” she states matter-of-factly to the physician.

The doctor points out that's just her opinion.

“As a physician, I am not under any obligation to hold your opinion,” he says. “And, if I do not share it, the law protects me.”

It's not the first time a pro-abortion media bias has been demonstrated. Five years ago, the Detroit News called legal abortion a “safe” procedure despite the fact that every successful abortion destroys a whole, distinct, living human and the substantial body of public health research on its risks. That research shows abortion increases the risk of breast cancer and a range of psychological problems and that both late-term abortions and multiple abortions significantly increase the risk of these health problems.

In De Rochambeau's case, though, the interview with the reporter has gone viral and triggered pro-abortion forces throughout France.

By the end of the next day, De Rochambeau's union had distanced itself from him.

In a short statement in French, the union, the Syndicat National des Gynécologues et Obstétriciens de France (SYNGOF), insisted De Rochambeau was only expressing his personal views and not those of the union.

“His personal position illustrates how physicians have the right to use the conscientious objector clause under the law,” reads the union's statement.

“SYNGOF reaffirms that this conscientious objector clause is a right of physicians and must not be called into question. But SYNGOF also does not in any way call into question abortion. Access to abortion is an uncontested and uncontestable right and the physician who has the right to refuse to perform abortions due to this conscientious objector clause has an obligation to immediately direct his patient to another physician who performs abortions,” the union wrote in that statement.

De Rochambeau's pro-life views even drew the ire of the French government.

“I find that the comments of this union representative are inappropriate at this time when we see this fundamental right of women being called into question in many countries. It will not be in France,” said Agnès Buzyn, France's minister of health.

She was joined in her condemnation of De Rochambeau's comments by France's secretary of state for the equality of women and men, Marlène Schiappa.

“With [Buzyn], we condemn the comments of the president of SYNGOF and are determined to defend everywhere the right to abortion. Every woman must have the freedom to access it,” wrote Schiappa on Twitter.

De Rochambeau stands by his comments.

In another interview, this one with BFM TV, the obstetrician explained abortion is not simply a medical procedure like all others.

“It is done to bring relief to a patient, to come to her aid, but on the other hand, it means ending a life. That is something not all physicians are prepared to do,” said De Rochambeau.