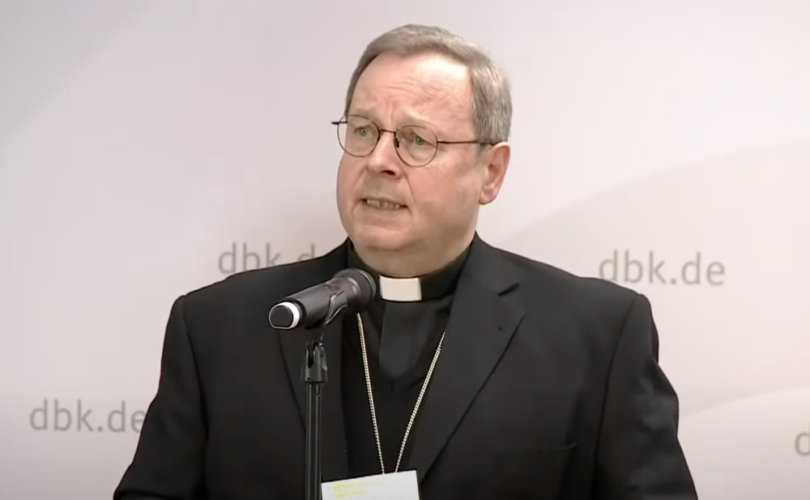 (LifeSiteNews) — The head of the German bishops’ conference has declared that he does not want to “accept an irrevocable ‘No’ from the Vatican” regarding the ordination of women priests.

According to a report by the German bishops’ own news site katholisch.de, Bishop Georg Bätzing said that “even if Rome sees this point as settled, it is still an urgent question” that has been asked and is therefore “on the table.”

Bätzing stressed that women are the central issue for the future.

“Access to the ecclesiastical office must be opened up, or it is hard to imagine the future of the Church in our country,” the prelate said.

“We must vigorously defend our German causes,” he proclaimed.

At the same time, he also dampened expectations that celibacy for priests would be lifted and women admitted to the ordained ministry at the end of the German Synodal Way.

“On Universal Church issues, we can only ask for our concerns to be processed,” Bätzing said. “We are doing what is possible.”

— Article continues below Petition —
Stand with faithful Archbishop Timothy Broglio as the NEW President of the United States Conference of Catholic Bishops!
Show Petition Text
10847 have signed the petition.
Let's get to 12500!
Thank you for signing this petition!
Add your signature:
Show Petition Text

Cardinal Luis Ladaria, S.J., the prefect of the Dicastery for the Doctrine of the Faith, addressed the question of female priests during the recent ad limina visit of the German bishops to the Vatican.

In his statement, Ladaria reiterated that the Catholic Church has already definitively spoken on the matter and said that “one must accept the truth that ‘the Church has no authority whatsoever to ordain women priests’ (St. John Paul II, Ordinatio sacerdotalis).”

The documents of the German Synodal Way have called for a change in Church teaching on the matter of women’s ordinations, even though the Magisterium of the Church has declared the matter definitively settled.

During the fourth Assembly of the Synodal Way in September, over 80 % of the German bishops approved a text calling for women’s ordinations.

The heterodox text called for a reassessment of Pope St. John Paul II’s magisterial  Ordinatio sacerdotalis (1994), the document in which the Pope confirmed the Church’s constant bi-millennial teaching of an exclusively male priesthood. In his apostolic letter, John Paul II quoted Pope Paul VI in his affirmation of the Church’s teaching on the matter:

She [the Catholic Church] holds that it is not admissible to ordain women to the priesthood, for very fundamental reasons. These reasons include: the example recorded in the Sacred Scriptures of Christ choosing his Apostles only from among men; the constant practice of the Church, which has imitated Christ in choosing only men; and her living teaching authority which has consistently held that the exclusion of women from the priesthood is in accordance with God’s plan for his Church. (Ordinatio sacerdotalis 1)

John Paul II added this emphatic declaration regarding the question of priestly ordination for women:

Wherefore, in order that all doubt may be removed regarding a matter of great importance, a matter which pertains to the Church’s divine constitution itself, in virtue of my ministry of confirming the brethren (cf. Lk 22:32) I declare that the Church has no authority whatsoever to confer priestly ordination on women and that this judgment is to be definitively held by all the Church’s faithful. (Ordinatio Sacerdotalis 4)

The Evangelical Church in Germany (EKD), a group of ecclesial communities forming the nation’s largest Protestant organization, has itself appointed women to clerical roles. The practice is not new to German Protestants: in 1927, the Evangelical-United Protestant Church of the Old Prussian Union introduced the ordination of women with limited duties and rights. Other members of the EKD followed suit in the latter half of the 20th century.