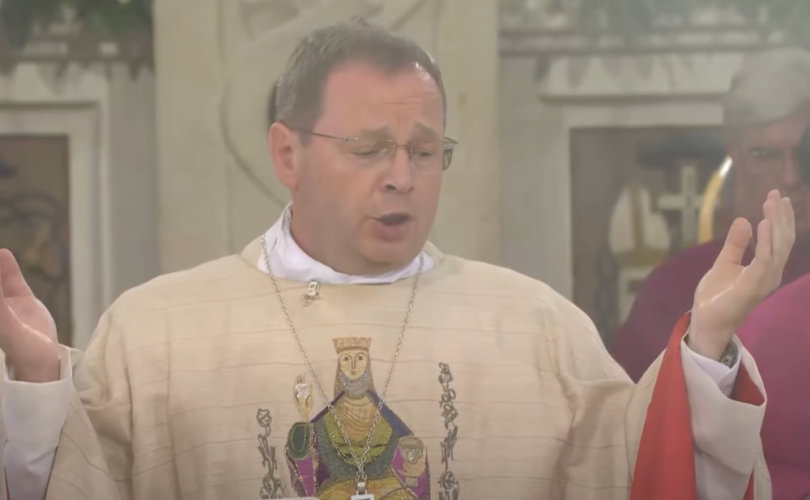 LIMBURG, Germany (LifeSiteNews) – Bishop Georg Bätzing, the head of Germany’s Catholic Bishops’ Conference (DBK), has defended his decision to promote a priest who sexually harassed women, saying that the promotion was “no faux pas.”

A report by the German weekly Die Zeit stated that Bätzing, the current bishop of Limburg, had promoted a priest to the post of district dean despite knowing of the priest’s sexually abusive past.

According to a May 25 statement from the Diocese, the Catholic employee had told the diocese in 2007 that the un-named priest called her “pet names” and stroked her hair and back. The statement said that the Diocese of Limburg “acted immediately,” and that the priest, when confronted with the allegations, was told that “such behavior should be avoided.”

In 2013 the same woman claimed that the priest had touched her chest beneath her t-shirt in 2007. However, the diocese stated that “[t]he priest was also confronted with this allegation, but, in contrast to the earlier allegations, firmly denied it.”

READ: Head of German bishops: ‘I consider the female diaconate to be very legitimate’

Bätzing, who became bishop of Limburg in 2016, only discovered the priest’s history “a few years after moving to the diocese,” according to the statement.  He confronted the priest in 2020 with another allegation dating from 2000. The diocesan statement does not clarify the nature of this allegation, or whether the priest admitted to it.

However, according to the Diocese of Limburg, “Bätzing made it unmistakably clear that he disapproved of such behavior,” and “issued a monitio, a written warning.”

While he does not appear to have earned any canonical or civil penalty, the priest “apologized to the staff member for his behavior, asked for forgiveness and showed credible remorse.”

According to the Diocese of Limburg, the priest “has been dealing intensively with his misconduct for years.”

With Bätzing sufficiently pleased with his “re-examination” of the allegations and series of events, he subsequently appointed the priest “district dean of one of the eleven districts of the diocese.”

“The shock and indignation of the employee about this personnel decision is understandable,” noted the diocese. “In a personal conversation with the employee, Bätzing tried to convey this decision to her and explained it.”

The employee spoke to Bätzing prior to the priest’s promotion and, when pictures emerged of Bätzing with the priest, reportedly told the bishop that “this was not possible for her at all.”

In an email to the Diocese of Limburg, obtained by Die Zeit, the female Protestant pastor also slated the priest’s promotion. The email read: “How is a real coming to terms with past misdeeds and a turning away from destructive and sinister structures supposed to take place if the perpetrators of yesteryear are not only not suspended, but also promoted? In moral terms, therefore, I cannot comprehend this decision.”

However, the diocese’s statement declared that “the formally disapproved misconduct of the priest and his handling of it were taken into account, as well as the fact that the pastoral workers entitled to propose expressed a clear vote for the appointment of this priest.”

As a result, “Bishop Georg has come to the conclusion that an appointment to the district dean is possible”  was the remark that closed the statement.

Bätzing defended the promotion of the sexually abusive priest, saying that while harassment of women is still “an absolute no-go,” rehabilitation should still be possible. According to Katolische.de, Bätzing spoke of unspecified “punishments” handed to the priest, saying that his promotion had been “no faux pas.”

Such a move could well backfire for Bätzing, as the negative press he is now receiving could undermine his public commitment to change the “role of women” in the Church. Only recently, the bishop once again called for a rejection of Catholic teaching by suggesting that women should be ordained and also that Catholic teaching on homosexuality should be re-written.

Bätzing is also on record of saying that he sees “the female diaconate to be very legitimate,” and that it could be used to open the door to female priests.