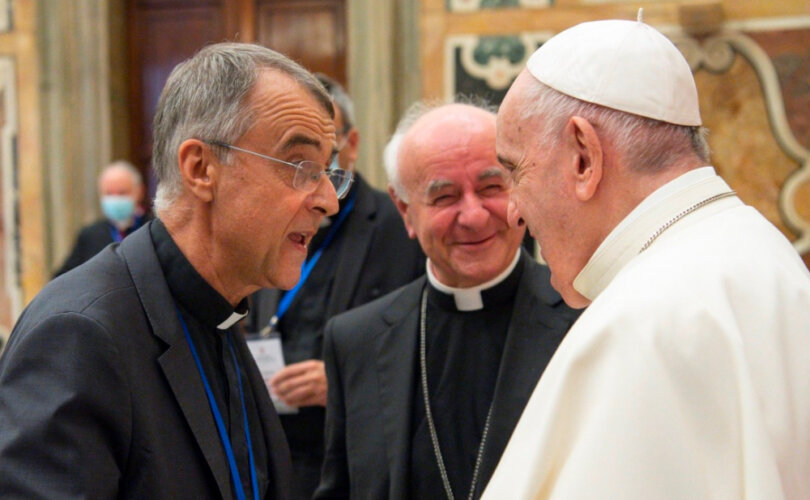 VATICAN CITY (LifeSiteNews) — The president of the “John Paul II Institute for Studies on Marriage and the Family” – gutted by Pope Francis in 2019 – has defended blessings for same-sex couples, arguing that “no one can be deprived of God’s blessing.”

Monsignor Philippe Bordeyne issued his statement in a recent interview published by La Croix International, the English-language daily edited by La Croix – the unofficial daily of the French episcopate.

President of the Institute since fall 2021, Bordeyne denied that a blessing gives any endorsement of an activity or lifestyle, as “its role is not to validate a practice.”

Instead, he stated that a blessing is simply “a prayer addressed to God, to praise God, to ask God for help and protection. It concerns people, and possibly also objects in their relationship to people.”

He added that “to bless, however, is to manifest the good that God ‘says’ about people and that God wants for them.”

Blessing asks God for what the Church has refused

Bordeyne responded to questions raised in relation to the Congregation (now Dicastery) for the Doctrine of the Faith’s (CDF) 2021 declaration that same-sex blessings are “illicit.” While not taking an explicit stance against it by directly rejecting the note, he appeared to undermine the Catholic teaching contained in the CDF’s statement.

The French cleric stated that those making a request for a blessing – intimating that this would be for same-sex unions – could also be a “request for recognition addressed to the community or institution,” which could thus take the form of “an appeal, a protest, or even a claim.”

“One asks God for what one has not been able to obtain from the Church,” he claimed.

READ: Next head of Pope’s marriage and family institute is pro-contraception

Bordeyne also continued by mis-quoting Scripture to defend the possibility of same-sex blessings. He recounted the passage of the blind man Bartimaeus, who cried out for Christ to heal him, and appeared to argue that opponents of same-sex blessings needed to “convert” in order to support such blessings, likening them to the disciples in his mis-interpretation of Scripture.

Bartimaeus is rebuked by the disciples who tell him to be quiet when he begs Jesus: ‘Son of David, have pity on me!’ Jesus’ attitude forces the disciples to convert: ‘Courage, get up, he is calling you.’

“Behind the request for a blessing, there is often the same thirst for inclusion,” continued Bordeyne.

However, the Gospel account – contained in Mark 10:46 and Matthew 20:30 – does not mention that the “disciples” told Bartimaeus to be quiet, but merely that “many” or “the multitude” rebuked him.

Nor does St. Thomas Aquinas’s famous Scriptural commentary, drawing from the saints and Fathers of the Church, contain any mention of the disciples rebuking the blind man for petitioning Christ. Instead, Aquinas presents the words of St. John Chrysostom, who wrote that Christ’s practice was “to make the good disposition of those who were to be cured known to all men, and then to apply the remedy, in order to stir up others to emulation, and to show that he who was to be cured was worthy to obtain the grace.”

Blessing a human right to be given to all?

Bordeyne appeared to reject this teaching of St. John Chrysostom, arguing that a blessing is a human right. “No one can be deprived of God’s blessing,” he stated.

A sacramental blessing “insists on the fact that despite the strength that the sacrament gives, there remains the poverty and the fragility of each person to live out what comes from it,” argued Bordeyne. “Hence the need for an appropriate accompaniment that gives meaning to the blessing.”

— Article continues below Petition —
SIGN: Pope Francis must revoke nomination of pro-abortion atheist to Pontifical Academy for Life
Show Petition Text
9559 have signed the petition.
Let's get to 10000!
Thank you for signing this petition!
Add your signature:
Show Petition Text

Despite Bordeyne’s argument that a blessing is some form of fundamental right which God cannot deny, his position stands directly contrary to that of the CDF in its 2021 note prohibiting same-sex blessings.

Drawing from the Rituale Romanum, the CDF outlined that “[b]lessings belong to the category of the sacramentals, whereby the Church ‘calls us to praise God, encourages us to implore his protection, and exhorts us to seek his mercy by our holiness of life’.”

Additionally, the CDF wrote that blessings “have been established as a kind of imitation of the sacraments, blessings are signs above all of spiritual effects that are achieved through the Church’s intercession.”

With this in mind, the CDF rejected the notion that a blessing is some sort of human birthright, stipulating that, regarding “human relationships,” the thing blessed must be in line with the life of grace:

Consequently, in order to conform with the nature of sacramentals, when a blessing is invoked on particular human relationships, in addition to the right intention of those who participate, it is necessary that what is blessed be objectively and positively ordered to receive and express grace, according to the designs of God inscribed in creation, and fully revealed by Christ the Lord. Therefore, only those realities which are in themselves ordered to serve those ends are congruent with the essence of the blessing imparted by the Church.

‘Dare to be pastorally creative’

Notwithstanding the CDF’s 2021 note, Bordeyne appeared to directly argue against its principles, defending blessings for same-sex couples.

He noted that the “blessing of a same-sex couple, precisely as a couple, would be too much like the blessing that follows the exchange of consent in the sacrament,” but also added that “on the other hand, people can still be blessed.”

Repeating his argument that such a blessing “is never intended to validate a lifestyle,” Bordeyne argued the “fact that homosexuals ask the Church to bless them invites us to listen to them, to enter into the complexity of their story and their situation.”

He also appeared to portray the practice of a homosexual lifestyle as in someway inevitable, a point which in itself demanded a blessing from the Church. “Let’s be realistic: not all people who cannot marry have the capacity to live alone. Are they not entitled to the support of the Church on their journey of faith and conversion? We must dare to be pastorally creative.”

READ: New president of John Paul II Institute wants ‘pastoral care’ of homosexuals, including ‘integration’ and reception of the sacraments

Unsurprisingly, Bordeyne’s comments have garnered swift criticism from Catholics, with popular commentator and catechist Deacon Nick Donnelly stating the French priest appears “ignorant of the fact that Sodomites deny themselves God’s blessing through being in a state of habitual, unrepented mortal sin.”

If the crisis was not so grave, the stupidity of the Bergoglians would be laughable

Ivereigh @austeni and Mgr Bordeyne appear ignorant of the fact that Sodomites deny themselves God’s blessing through being in a state of habitual, unrepented mortal sin pic.twitter.com/dT14APEtoU

Nor is Bordeyne a newcomer to such controversy. Upon his 2021 appointment to the gutted John Paul II Institute, Bordeyne was noted for his support of contraception, Holy Communion for the divorced and “remarried” and openness to homosexual couples.

His latest interview is a continuation of arguments he has previously espoused in writing during last summer, when he argued for a change in approach to homosexuals and the Church’s teaching on sexuality, from pastoral welcoming to “integration” through “discernment,” eventually leading to the reception of the sacraments in spite of an “irregular situation.”