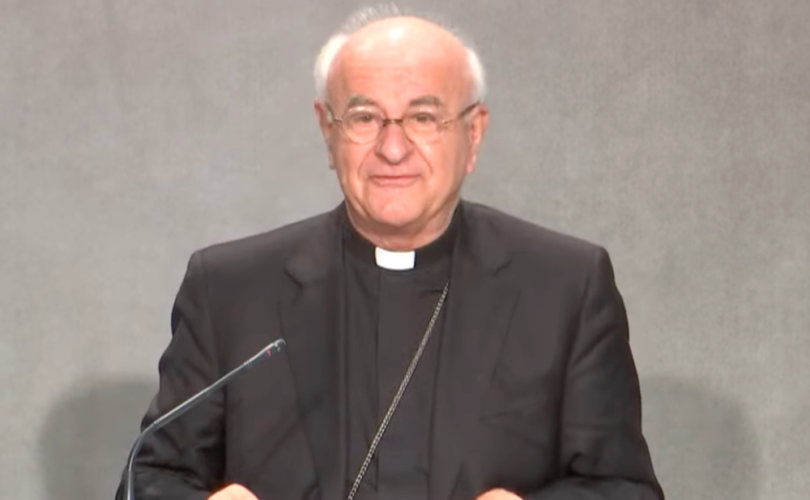 VATICAN CITY (LifeSiteNews) — The president of the Vatican’s Pontifical Academy for Life has issued a call for children to be injected with the abortion-tainted COVID-19 shots, saying such a measure is crucial in protecting “the greatest number of people possible.”

In a recent interview given to Crux’s Vatican Correspondent Elise Ann Allen, Archbishop Vincenzo Paglia, president of the Pontifical Academy for Life, delivered a warning call that child vaccination was a key part of preventing the spread of COVID-19.

“We have to do everything! Vaccinate everyone, including children, in order to protect the greatest number of people possible,” said Paglia. “We must vaccinate everyone in the sense of reaching those distant, remote territories, the most disadvantaged areas of the planet.”

Claiming that the COVID injections protect “both those who take them and others,” the archbishop told Crux that injecting children also prevented them from spreading the virus. “Vaccination protects children from any, even if less frequent, serious consequence of COVID-19.”

Such a move would form part of Paglia’s desire for those in positions of authority to “care for the young.” Doing so was an “urgent” need, Paglia stated, to respond “to the fear of the future.”

“Hope and concreteness of action are the two watchwords of our time,” Paglia added, welcoming the fact that children aged 5-11 are now being injected in the U.S. and Europe.

This was a “positive sign,” he said, showing that “society takes care of the weakest, thinking above all of protecting the future of new generations.”

“The psychological consequences — not just health — of the pandemic will be seen in the coming years, in the medium and long-term. Our children and adolescents of today, what adults will they be?” Paglia asked.

Continuing by lauding the perceived efficacy of the injections, Paglia claimed that any developments in the last century were due to vaccines. “We must not forget the merit of the great vaccination campaigns of history: Against polio, against smallpox, for example. If our planet is developed in the twentieth century, it is also due to vaccines that stopped diseases.”

The 76-year-old prelate also called for a more equal distribution of COVID injections across the globe, equating vaccine campaigns with the end of COVID-19’s prevalence.

“The pandemic has not only affected elderly people, in Italy and around the world, but also children and adolescents,” he said.

Decrying the “serious problem of distribution, of infrastructure, and technologies to be implemented,” Paglia said that wide-spread vaccination in Asia, Latin America and Africa, “could be a step forward toward a greater health protection, for a more equitable and widespread access to healthcare.”

“Vaccines and the situation of the pandemic teach us that inequalities are not only social, economic,” but also involve “access to education or other essential services,” stated the archbishop.

“The world will come out stronger only if it is more united, more just, more ‘fraternal,’ and healthier,” he closed.

However, on the very day Paglia’s interview promotion of child vaccination was released, U.S. data was also released documenting the number of adverse reactions following the COVID injections over the past year.

From December 14, 2020, through December 10, 2021, 965,843 reports of adverse events were counted following the injection, with over 29,000 of these reactions occurring in children aged between five and seventeen.

Despite these concerning data, Archbishop Paglia has consistently promoted the abortion-tainted injections, via comments made to the media and at large conferences held at the Vatican and online. He has expressed no concerns about questions posed to him regarding the safety of the shots, or their moral quality, given their connection to abortion.

Speaking to members of the press in July, Paglia attacked Catholics who held moral objections to the injections, refused to listen to concerns about deaths following the jabs, and ordered Catholics to “listen to what the Church has already said” in promoting the shots.

The speakers attacked “vaccine hesitancy,” with Paglia himself calling “the greatest vaccination effort ever made in history” as “the priority,” before describing “vaccination” as “crucial” in protecting against COVID-19.