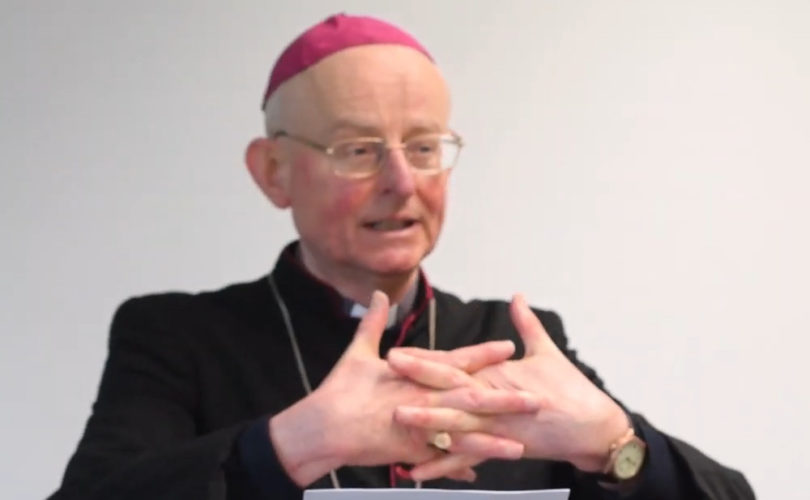 ABERDEEN, U.K., April 30, 2021 (LifeSiteNews) — Several months into the Irish government’s public worship ban, the president of the Bishops’ Conference of Scotland has rebuked penalizations as “extreme and unnecessary.”

Bishop Hugh Gilbert of Aberdeen condemned restrictions unveiled in Ireland two weeks ago in a statement published on behalf of the Scottish bishops on Wednesday. The bishop called the new rules, which criminalize attendance of public Mass, “disturbing” to the bishops of Scotland.

“Recent developments that penalize the celebration of Holy Mass have been disturbing not only to the Irish bishops’ conference but also to the bishops of Scotland,” Bp. Gilbert, who presides over the diocese of Aberdeen, said. “We all recognize the need for restrictions to protect the common good of all people in a pandemic but to enact legislation that criminalizes those who gather to celebrate Holy Mass is indeed extreme and unjust.”

The Catholic News Agency noted that the statement is “a rare intervention by a bishops’ conference on matters in a neighboring country.”

The statutory instrument 171 of 2021, authorized by Health Minister Stephen Donnelly on April 12, prohibits religious services except for funerals and weddings and mandates that priests “lead worship or services remotely.” Violators could face up to six months in jail.

“We consider the publication of this statutory instrument, together with associated penal provisions, to be provocative and formally enacting a potential infringement of religious freedom and of constitutional rights,” Archbishop Martin, the primate of Ireland, said after the restrictions were announced.

He added that the “draconian” instrument was promulgated in a “clandestine manner without notice or consultation” and that the Irish bishops did not know about the law until it was publicly revealed. The move was particularly disappointing given “reassurances of the [prime minister] to Church leaders only three days ago that he understood the importance of faith and worship to the people of Ireland,” Abp. Martin said.

The primate emphasized that the bishops had “consistently impressed on government that people of faith value highly their spiritual well-being and consider the public practice of their faith as essential — something which has not been sufficiently recognised in statute.”

The Irish government has deployed notably extreme measures throughout the COVID-19 crisis, often in collaboration with certain prelates. Public Mass has been suspended in the nation since last year.

“I must speak out to represent the voices of a very large cohort of people who are growing increasingly weary of being unable to attend Mass and whose spiritual and mental wellbeing is being eroded,” Bishop Alphonsus Cullinan of Waterford and Lismore said even before the implementation of additional anti-Mass measures earlier this month. “Their patience is wearing thin. They are frustrated and feel unrepresented and discriminated against.”

“It is very difficult to explain to people why they are banned from public worship bearing in mind also that Ireland is one of the tiny few countries in Europe where public worship is not allowed,” he said.

Catholics in neighboring Scotland resumed Mass in March, following a major legal victory. Highly restricted public masses have been celebrated in England throughout the ongoing, nation-wide lockdown that has triggered massive protests.

Studies repeatedly have shown that lockdowns, which were pioneered by the Chinese Communist government, do not significantly stop the spread of COVID-19. Stay-at-home orders and forced business and school closures have coincided with surging overdose deaths and child suicide attempts and may contribute to over 100,000 non-virus deaths in the U.K. alone.