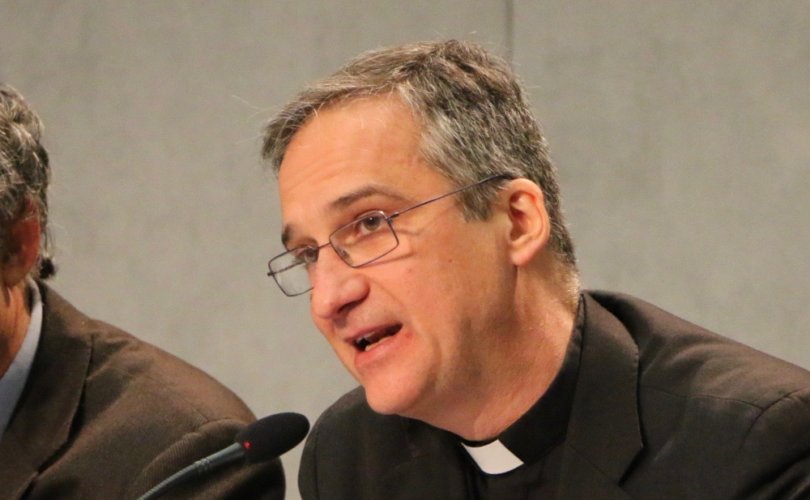 VATICAN, March 21, 2018 (LifeSiteNews) — The Vatican’s top communications official has resigned today in the wake of the ‘Lettergate’ scandal.

In his resignation letter to Pope Francis, dated March 19, Msgr. Dario Viganò, prefect of the Secretariat for Communications, said the recent controversy surrounding his work “destabilizes the complex and great work of reform that you entrusted to me.”

The ‘Lettergate’ scandal erupted last week when Msgr. Viganò truncated a confidential letter of Pope emeritus Benedict XVI and presented it to the world as if it contained only praise for Pope Francis. The Vatican later admitted to doctoring a photo of the letter that it provided to the media, so as to focus only on its more favorable comments.

Under increased media pressure and scrutiny, on Saturday the Vatican released the entire letter, revealing that Benedict XVI had also expressed “surprise” that a known dissenter, who spearheaded “anti-papal efforts” during his pontificate and that of Pope John Paul II, had been featured in an 11-volume booklet series on The Theology of Pope Francis.

But Msgr. Vigano’s “stepping back” does not mean he will be leaving the Secretariat for Communications.

In a letter dated March 21, Pope Francis accepted Msgr. Viganò’s resignation, writing: “After our recent meetings and after having reflected and carefully pondered the reasons for your request to ‘take a step back’ in direct responsibility for the Dicastery for Communications, I respect your decision and I welcome, though not without some effort, your resignation as Prefect.”

Pope Francis then asks Msgr. Viganò to remain on at the Secretariat for Communications, and appoints him as “Assessore” [Consultor] of the Dicastery “in order to be able to give his human and professional contribution to the new Prefect in the project of reform.”

Robert Royal, editor of The Catholic Thing and member of the ‘papal posse’ on EWTN’s The World Over, told LifeSiteNews: Viganò “had to do it.”

“You can’t be the head of Vatican communications after such a fiasco. I see that he’ll be hanging around as an advisor for a while, odd thing given what’s happened. It will be interesting to see where he goes next,” Royal said.

In comments yesterday, Royal told LifeSiteNews the “most interesting part of this whole story was what the spin was intended to do.”

“Since you don’t try to bend the truth unless you really feel there’s a need to, these efforts seem to imply that some people, somewhere in the Vatican, feel the pope is vulnerable because of perceived discontinuities with his predecessors and a lack of theological coherence. Papal critics, of course, have long been making those precise claims, whatever continuities or theological justifications have been offered,” he said.

Royal added: “The most salient part of this story seems to be that some of the pope’s closest collaborators themselves feel a need to protect him on those two fronts as well. If they were feeling confident about the overall position, they would never have bothered to try something like this.”

Well known English priest and blogger, Fr. John Hunwicke, had this to say about the ‘Lettergate’ affair:

“When one reads a text — particularly by someone with a refined and subtle mind — one is aware of the the balances and antitheses within it. To receive a text saying ‘A but B’, and to delete A or B, is to misrepresent the original and to make it say what it did not intend to say. Viganò claims that he had ‘no intention of censoring’ Benedict XVI; but he done something much worse than mere censorship. He has tried to present the Pope Emeritus as saying the opposite of what he did say.”

“The assertion of an ‘interior continuity’ between the two pontificates has also been misrepresented. It is highly probable that Ratzinger shares the view of Cardinal Muller: that if there had been any intention of changing the Magisterium, it would have had to be done in plain language and with total clarity, not by obscure hints in footnotes. Since that has not been done, the previous teaching still stands and whatever Bergogoglio says must be understood only through the hermeneutical lens of what Benedict and John Paul had taught.”

“The final paragraph (‘Only as a footnote…’) is in fact obviously the real meat of the letter,” Hunwicke said. “The clear-cut criticism of Hünermann who so ‘virulently attacked’ Veritatis splendor actually stands as Ratzinger’s assertion of Veritatis splendor and its abiding validity … a document not once mentioned or even foot-noted in Amoris laetitia.”

Msgr. Viganò’s resignation is not a complete surprise.

Sources close to the Vatican told LifeSite earlier this week, “Viganò is increasingly isolated.” They added: “If it weren’t for Pope Francis’ protection, he would have been gone a long time ago.”

The same source noted that the press release that accompanied the final publication of Benedict’s XVI full letter, on Saturday March 17, was on the letterhead of the Vatican’ Secretariat for Communications.

“The Holy See Press Office and the Osservatore Romano, which are tied to the Secretariat of State, have carefully kept out of the affair,” they said.

The news of Msgr. Viganò’s resignation comes on the traditional March 21st Feast of St. Benedict.

This article is being updated.