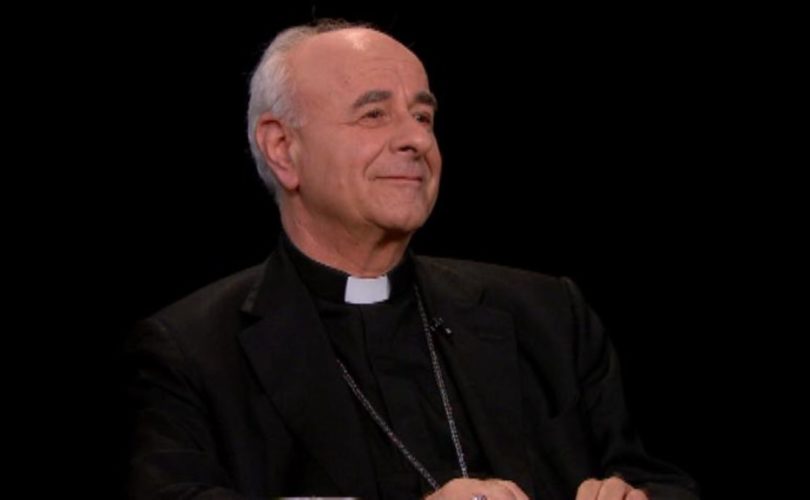 September 26, 2017 (LifeSiteNews) – The President of the Pontifical Academy for Life has defended the Pope’s recent replacement of the John Paul II Institute for Studies on Marriage and Family with a school focused on Amoris Laetitia, and argues it is in fact a revamping of pro-life efforts.

In the same interview, he said being pro-life encompasses opposing gun violence, support of immigration, and environmentalism, and claimed Pope St. John Paul II laid the way for Church approval of Communion for adulterers.

In addition to heading the Vatican pro-life academy, Archbishop Vincenzo Paglia is the Grand Chancellor of the new Amoris Laetitia-focused school, the John Paul II Pontifical Theological Institute for Marriage and Family Sciences.

Paglia told Crux's John Allen that the Pope’s transformation of the Institute is “about growth.”

The Institute “couldn’t just stay like it was,” Paglia said, because of changes “both in the awareness of the Church and also the social, cultural and anthropological conditions of the world.”

The John Paul II Institute has long been seen as a stronghold of Catholic orthodoxy. Before the Extraordinary Synod on the Family, two professors of the former Institute authored a book arguing against allowing Holy Communion for the divorced and “remarried” without an annulment.

He said that Pope St. John Paul II began the “revolution” in the Church for Communion for the divorced and remarried, and that Pope Francis is carrying this on as the saint’s “best interpreter.”

A “clear example” of this “is the divorced and remarried.”

“The real revolution there happened under John Paul II, not Francis, which hasn’t really yet been understood,” said Paglia. “You have to remember that before [Familiaris Consortio], it wasn’t that the divorced and remarried just couldn’t get Communion, it was they were practically excommunicated and expelled. They were outsiders. After John Paul, everybody was inside the house … I can’t just send them out on the terrace!”

Reconciliation in the sacrament of Penance which would open the way to the Eucharist, can only be granted to those who, repenting of having broken the sign of the Covenant and of fidelity to Christ, are sincerely ready to undertake a way of life that is no longer in contradiction to the indissolubility of marriage. This means, in practice, that when, for serious reasons, such as for example the children's upbringing, a man and a woman cannot satisfy the obligation to separate, they “take on themselves the duty to live in complete continence, that is, by abstinence from the acts proper to married couples.”

Whether Amoris Laetitia opened the door to changing the Church’s perennial practice, which John Paul II defended in Familiaris Consortio, has been the subject of debate ever since its release.

Pope Francis hasn’t responded to the dubia, or formal request, of four cardinals asking him point-blank whether his exhortation makes this radical change. However, he did explicitly endorse guidelines allowing Communion for the divorced and remarried, saying “there is no other interpretation.”

Paglia said Amoris Laetitia will be the “Magna Carta” of the new school and that “the direction that the new institute will take is strictly connected to” the controversial exhortation.

“An institute like ours needs to be able to preserve the treasure of the experience of the work the Church has already done in this area, but now to offer instruments for formation, for priests and for families, so we can truly live this new situation” of family issues, said Monsignor Pierangelo Sequeri, the president of the new Institute.

“If we’re just scared by everything and try to pull ourselves out of what’s happening, you can have all the doctrine you want, but it doesn’t accomplish anything,” he said.

The ‘ecological question’ is part of being pro-life

Paglia, who has previously defended the recent appointment of an abortion supporter to the pro-life academy he heads, told Allen he “won’t allow anyone to be more ‘pro-life’ than me.”

He explained that to him, this means refusing to “accept” the death penalty, “that immigrants die on the streets,” or that more people in the U.S. have been shot than were murdered in the Twin Towers on 9/11.

“I believe that the time has arrived in which the Church must take up the defense of life in a global sense, including the ecological question,” said Paglia, noting he “told the American bishops this in February.”

The archbishop said he “certainly” thinks the Church should be open to partnering with feminists to fight surrogacy, something Allen suggested could be one of its “new alliances.”

Paglia commissioned a homoerotic mural in which he is depicted for his former cathedral. He also oversaw the development of a sex-ed program that a psychiatrist said contained material similar to what sex abusers use to groom victims.