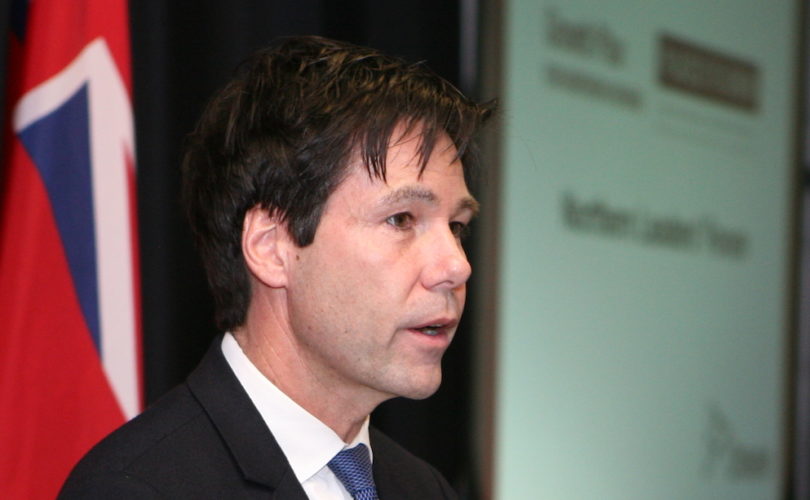 TORONTO, April 13, 2016 (LifeSiteNews) — Ontario Health Minister Eric Hoskins’ denunciation of sex-selection abortion in the wake of a study that suggests Indian-born women in the province are aborting their daughters in the second trimester of pregnancy is “hypocrisy,” says Campaign Life Coalition Youth Coordinator Christina Alaimo.

“It’s hypocrisy because when they denounce sex-selection abortion, they’re saying it is wrong to kill a child because it’s a girl, so they’re recognizing they’re ending the life of a human being that has a determined sex,” noted Alaimo, who has a master’s degree in science, specializing in healthcare ethics.

She also dismissed Hoskins’ insistence that sex-selection abortion contravenes guidelines of the College of Physicians and Surgeons of Ontario (CPSO) as “semantics.”

While Hoskins’ outrage is “commendable,” Alaimo told LifeSiteNews, “until he does something, it’s just words.”

Hoskins, a family doctor, denounced sex-selective abortions Tuesday and said it was “important that doctors and other front-line health care providers understand that there are guidelines . . . by the CPSO that restrict them from engaging or being complicit in this practice,” according to the Toronto Star.

“No health care provider, including physicians, should in any circumstances be providing or supporting individuals or families that are attempting to determine the sex of their child in order to secure a sex-selective abortion,” Hoskins said.

“This is an issue of gender equality and equity and has no place in Canada, let alone in Ontario.”

Hoskins’ remarks were in response to the Canadian Medical Association Journal’s publication a day earlier of a longitudinal study by a St. Michael’s Hospital research team.

The study concluded that Indian-born women in Ontario were choosing to abort daughters conceived in a third or subsequent pregnancy in the second trimester of the pregnancy, or after fourteen weeks’ gestation, the time at which ultrasound exams can confirm the baby’s sex.

The authors calculated that the statistics represent a loss of 4,400 girls between 1993 and 2012, the years of the study, Ferguson reported.

Any such measures must “strike a balance” between preventing sex-selection abortion and the right of parents to know the sex of their child in utero, Hoskins said.

LifeSiteNews contacted the College of Physicians and Surgeons for comment but it did not respond by deadline.

CLC’s Alaimo, however, finds it “ludicrous” for Hoskins to suggest that the CPSO guidelines will have the effect of stopping sex-selection abortions.

“The only way a doctor could hypothetically deny an abortion is if a woman says to him, ‘I want to abort my child because it’s a girl’,” Alaimo said. “How many women engage in that conversation with an abortionist?”

The grim reality is that “you come in, you get the abortion,” she added, noting that abortion doctors “don’t ask questions because they don’t need to, because it’s allowed, whatever you want.”

The practise of sex-selection abortion among Ontario women born in India only came to light “because the stats indicate there are more boys being born than girls,” she noted.

Alaimo suspects the Ontario Liberal government’s stated dismay at sex-selection abortion is “because it’s a popular opinion, but it means nothing because they don’t plan on doing anything about it anyway.”

“Mind you,” she added, “if they do impose a law saying you can’t abort a child because of its sex, that would be the first restriction on abortion in Canada.”

Hoskins said people need to be educated that sex-selection abortion is morally unacceptable, and absent such education, immigrant women might return to their home countries for such abortions.

“So it’s critically important, I think, that we educate our health care professionals and help them understand the consequences,” Hoskins said, “but also educate, particularly, new immigrants in certain communities that this is an issue of gender equality and equity and it’s a practice which has no place in Canada, let alone in Ontario.”