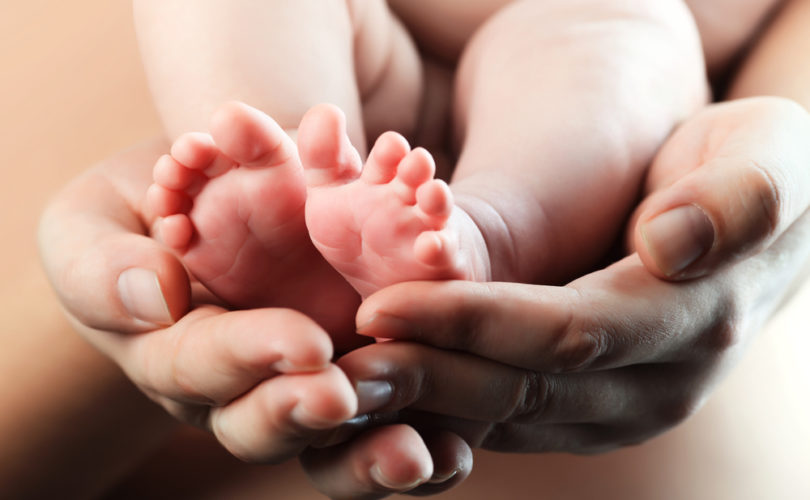 March 14, 2016 (LiveActionNews) — Vicky Harper, age 24, was struggling financially when she found out she was pregnant with her third child. Worried and afraid, she decided that she should abort her baby, rather than raise a third child under the age of five.

Her boyfriend Kennan McIvor, age 19, assured her that he would take care of her and the baby, but Harper was set on aborting.

Her baby boy, at 7 weeks gestation, was scheduled to be killed by a D&C suction abortion which vacuums the baby out of the womb. At this age, the baby’s bones are still very weak and the vacuum rips the child to pieces.

However, in Harper’s case the abortionist failed to do her job and kill the baby, something Harper realized almost immediately after returning home.

“I was tired and dizzy all of the time,” she told the Mirror. “I was off my food. As I already had two children, I knew what pregnancy felt like.”

Harper took another pregnancy test, which came back positive. The doctors didn’t believe her, so she took a total of 15 pregnancy tests, each showing she was still pregnant.  She asked the doctor to give her an ultrasound, which confirmed that Harper’s baby was still very much alive. This means that either the abortionist, who in Harper’s case was still in training, failed to perform the abortion correctly, or an unknown twin was successfully aborted while a second baby was left alive and intact.

When this was discovered, it had been nine weeks since the abortion, and Harper was now 16 weeks pregnant. Doctors offered her a medical termination, which they warned came with increased risks, or a second surgical abortion, which could damage her womb.

“I didn’t want to risk a medical abortion in case it didn’t work because I was so far on,” said Harper. “But neither could I face the thought of giving birth. I asked them if [a second surgical abortion] could kill me. They told me although the risk was very low, it could. I felt like I’d been backed into a corner. I was pregnant with a child I never wanted or planned. But I had no other option than to have my baby.”

Baby Jack was born early this month completely healthy. Harper told the Mirror that she does not regret turning down the second abortion.

“I wouldn’t change it for the world,” she said. “He’s special and he’ll always know just how much he’s loved.”

Harper said that when Jack is older she will tell him that she attempted to end his life before he was born.

“But how does a mum find the words to tell her child she never wanted him? All I can tell him is that he’s a survivor and that I love him more than I ever thought possible,” she explained.