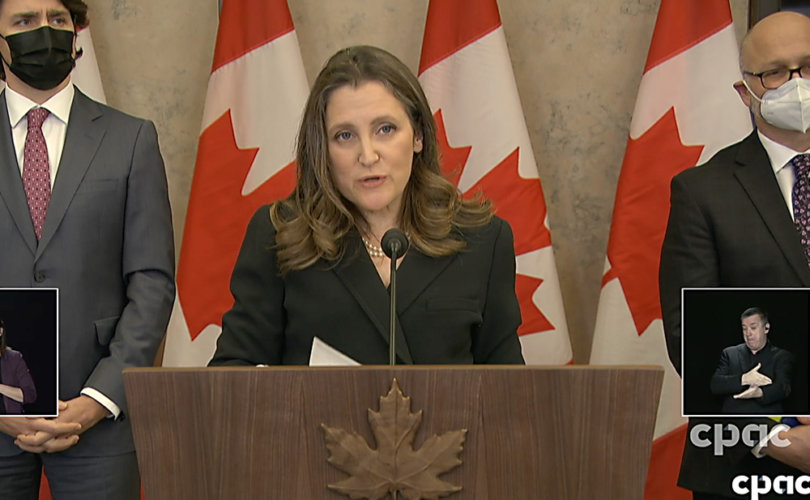 OTTAWA (LifeSiteNews) – Notes show that Canadian Finance Minister Chrystia Freeland told fellow cabinet members the Freedom Convoy supporters whose bank accounts were frozen under the Emergencies Act (EA) would not be able to access their funds until they first reported to police.

As per Blacklock’s Reporter, Freeland made the comments in a secret cabinet meeting held February 21.

The minutes from the meeting show that “banks were pleased” with the suggestion of police reporting before one could access their money.

“Minister of Finance reported on a conversation she had with chief executive officers at the major banks,” the minutes noted.

“Banks were pleased that the government was working on a plan that would see individuals with their bank accounts frozen report to police prior to the bank to have their accounts unfrozen.”

It should be stated that Freeland’s suggestion of police reporting was never made official, as far as the evidence is concerned.

Her comments were revealed from 25 pages of censored minutes that came to light during testimony at the Public Order Emergency Commission, which is currently tasked with looking into the use of EA to shut down the Freedom Convoy.

The Public Order Emergency Commission hearings into Prime Minister Justin Trudeau’s unprecedented use of the EA began October 13 and are expected to last six weeks while hearing from at least 65 witnesses, including Trudeau, Freeland and others in his cabinet.

On February 14, Freeland mandated certain bank accounts be frozen under the EA. In total, nearly $8 million in funds from 267 people were frozen. Additionally, 170 bitcoin wallets were frozen.

The government froze the bank accounts regardless of whether an individualhad been charged with a crime.

Also, it was reported that the Royal Canadian Mounted Police (RCMP) admitted that it emailed a blacklist of so-called Freedom Convoy sympathizers to financial lobbyist groups.

While Trudeau ultimately revoked the EA on February 23, under the EA many Canadians who supported the Freedom Convoy were targeted by the federal government and even had their  bank accounts frozen without a court order.