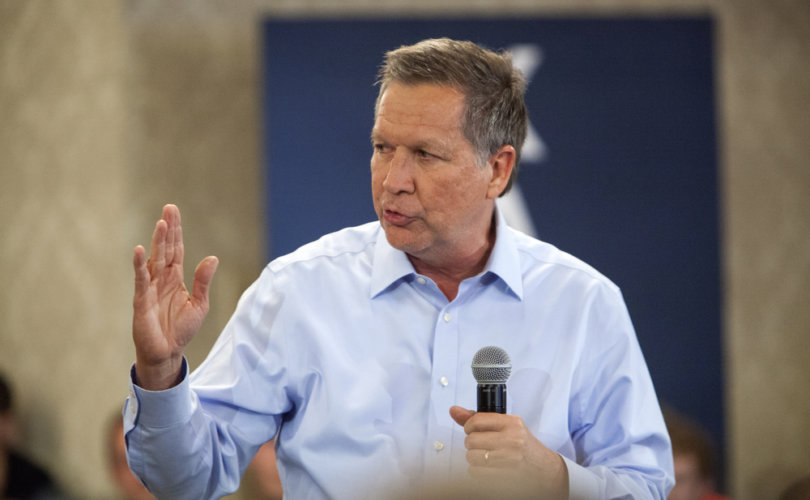 COLUMBUS, Ohio, December 13, 2018 (LifeSiteNews) – The Ohio legislature voted 18-13 Wednesday to pass a ban on aborting babies if their heartbeat can be detected, setting the legislature up for a confrontation with ostensibly “pro-life” Republican Gov. John Kasich.

The vote follows the Ohio House’s vote last month to pass House Bill 258, which bans abortions on any preborn baby with a detectable heartbeat, except in cases of a “substantial and irreversible” physical threat to the mother. Any physician who violates the statute would face up to a year in prison. Preborn babies’ hearts finish forming around seven or eight weeks into pregnancy.

Cleveland.com reports that the Senate added two amendments to the bill, which will require the House to approve them before sending the bill to the governor’s desk. The first clarifies that the ultrasounds used to detect heartbeats don’t have to be administered transvaginally. Pro-abortion activists have falsely claimed in the past that other pro-life bills require transvaginal ultrasounds, calling them “invasive” and even akin to rape despite being commonly used by Planned Parenthood itself.

“It’s my understanding a transvaginal ultrasound could possibly detect a heartbeat earlier than an external heartbeat detection method,” Sen. David Burke explained. “But we found that process is possibly intrusive. We wanted to protect the rights of women who didn’t wish to have that done to them because their doctor may be under the impression that that’s the only thing that bill allows.”

The other amendment would let the state medical board call an emergency meeting over any physician accused of violating the law, and decide whether to suspend or revoke his or her license without the lengthy wait for a criminal conviction.

Jaime Miracle of NARAL Pro-Choice Ohio claimed the amendment gives a “blank check” to Ohio Right to Life president Mike Gonidakis, who sits on the board, despite Gonidakis holding just one of the board’s twelve votes.

Speaking out in support of the bill, state Sen. Peggy Lehner, a Republican and former Ohio Right to Life leader, recounted the sorrowful testimony of women who regretted their abortions. “I have never had a woman cry when she said she chose life. Not once. Not a single time,” she said, the Columbus Dispatch reports. “Because in our hearts we know this is a human life.”

The Dispatch notes that four Republicans voted with Democrats against the bill, meaning it came up two votes short of the supermajority necessary to override a probable veto from Kasich. The governor, who vetoed a heartbeat measure in 2016, declared last month that he remains opposed to the bill because he thinks it would fail to survive a costly lawsuit.

Supporters of the bill argue that virtually every pro-life state law is challenged in court anyway, and that pro-lifers should welcome such a fight as a test case against Roe v. Wade. Ohio Right to Life is neutral on the bill, however, with legislative director Jessica Warner telling Our Sunday Visitor, “we don’t want to send something to the Supreme Court that won’t be able to win.”

Further complicating the prospects of a Roe challenge are the unknown views of the Supreme Court’s newest justice, Brett Kavanaugh. Many pro-lifers have theorized that Donald Trump’s appointees to the court make now the perfect time to challenge Roe, but Kavanaugh’s vote Monday not to hear a case involving Medicaid funds to Planned Parenthood has reignited fears about his thinking.

Other pro-life leaders have expressed outrage for Kasich, who has signed some pro-life measures but also claimed Republicans “focus too much” on abortion. Faith2Action president Janet Porter declared that Kasich “can never run again as a ‘pro-lifer,’” while Citizens for Community Values president Aaron Baer said the governor “should be ashamed of himself.”

The bill’s prospects before the current legislative session ends on December 31 are somewhat academic, however. Incoming Republican Gov. Mike DeWine has already said he would sign a heartbeat abortion ban, making a version likely to become law next year even if House Bill 258 fails.