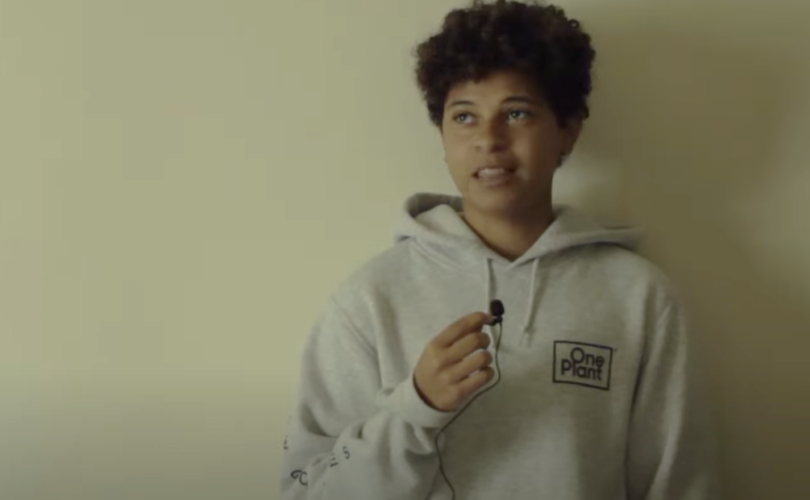 (LifeSiteNews) — Jalisa Vine gives a heartbreaking testimony on how gender surgeries ruined her life in a “detransition diary” video series where she talks about how her medical “transition” from female to male permanently damaged her and how she is now trying to detransition and accept herself for who she really is.

The description of Vine’s introduction video reads “Born female, at the age of 18 I began medically transitioning. 8 years later- after hormones, and several surgeries, I am now detransitioning.”

The detransitioner describes how traumatic experiences led to her decision to medically transition. “The majority of my life so far has been a trauma response. My whole identity has been rooted in trauma,” Vine explained. “It’s really hard to look in the mirror and love myself right now.”

“My transition was a trauma response,” Vine concluded.

“It’s like mourning an entire life that should have been mine. That was my birthright,” Vine stated in the first entry of her detransition diary that has over 270,000 views.

“I don’t know how this happened to me. And I’m just so angry and I’m so sad. I just don’t know how this happened. Like a virus or something, it just like, infected me, that happened so quickly,” she says while sitting on her bed and crying. “Why did I do that? None of this makes any sense. I should have waited to let myself heal. I can’t have kids … ”

“I don’t want to use the word ‘indoctrinated,’ but I was young and I was sad and I was impressionable, and I thought that this would fix everything,” Vine lamented. “I had bottom surgery. There’s no fixing it, there is no getting better. I have to live like this for the rest of my life.”

Vine continued her emotional testimony by saying the following:

As a woman who thought she was trans … and transitioned. Live as trans for 8 years, had top surgery, full hysterectomy, had bottom surgery. Went all the way as far as one can go and then woke up and realized ‘I made the biggest f*** mistake of my life.’”

A comment under the video by user “Hanna N” with over 5,000 likes reads, “The adults and professionals should not have allowed this to happen to you. I’m sorry. This is the medical scandal of our time.”

In the second entry to her detransition diary titled “I owe you an apology,” Vine revealed that she developed an addiction to pain medication after one of her sex reassignment surgeries. “All the mental health issues I had prior to transitioning were still there, probably worse, a lot worse,” she stated.

Vine described why it took her such a long time to realize that transitioning was a mistake:

“I did portray it online that transitioning was the best thing that ever happened to me. It wasn’t. And I’m sorry,” Vine continued. “Changing my external world did not change my internal world.”

Her third entry is named “my body was never the problem” and the detransitioner explained in it how her mental state was the real issue and not her body.

“I wanted to be a boy, so I did everything that boys do, but I don’t know what it is actually like to be a man. I only have this experience of a female emulating a man,” Vine stated.

“I needed to accept myself and my body for who and what I was, and there was never an issue with who I was,” she continued. “There was never any need to change anything about my body. My body was never the issue. My thinking was the issue.”

Vine went on the reveal how “a lot of the problems were made worse by transitioning.”

“Transitioning took me further from my truth, further from who I am, and further from self-acceptance. It was like running for something that I could never catch,” Vine explained.

A growing number of detransitioners have publicly come out with their stories of regret over their decision to have gender surgeries and hormone therapies. The upcoming documentary “Affirmation generation” tells the story of six of these detransitioners. Matt Walsh’s viral movie “What is a woman?” also dealt with this issue. Furthermore, the Detransition Subreddit “r/detrans” has grown tremendously over the past couple of years and now almost has 40,000 members. This site exists for detransitioner to share their experiences with others and look for help after discovering that their decision to medically transition was a mistake.