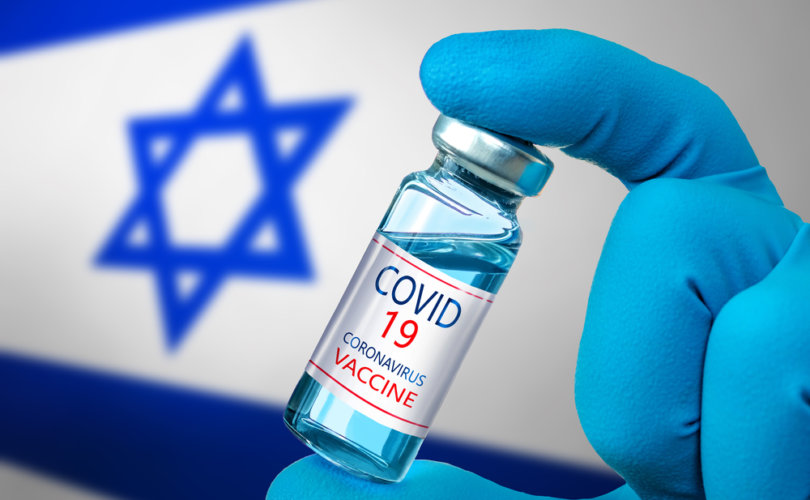 (LifeSiteNews) — Israel now leads the entire world in new daily reported COVID-19 cases per capita, despite also being one of the most aggressive in vaccinating its population.

The Times of Israel reports that, as of January 20, Israel reached the milestone according to numbers from Our World in Data. Almost 65,000 Israelis tested positive on Wednesday, raising the total number of active infections to more than 400,000.

Prof. Eran Segal of the Rehovot-based Weizmann Institute qualified the findings by noting that Israel also conducts more daily testing relative to its population size than most countries, meaning other nations may have more cases that go unrecorded.

Still, the country’s dubious distinction provides further ammunition to those questioning its aggressive vaccination campaign. Israel is the first country to administer second boosters, and fourth overall doses, to those over age sixty.

Last week, Prof. Gili Regev-Yochay of Sheba Medical Center admitted that the COVID shots are “not good enough” to stop transmission of COVID’s omicron variant, which is now thought to be the dominant strain. Previous reporting indicates that they struggled against previous variants, as well, with The Daily Beast reporting last August that Israel experienced a “massive surge of COVID-19 infections,” attributed to the delta variant, despite being “one of the most vaccinated countries on earth.”

Prof. Cyrille Cohen, head of the Laboratory of Tumor Immunology and Faculty of Life Sciences at Israel’s Bar Ilan University, said recently that the COVID vaccines have not lived up to expectations because they “are not providing what we call sterilizing immunity.” Particularly with the rise of omicron, “we don’t see virtually any difference, a very narrow gap between people who are vaccinated and non-vaccinated, both get infected with the virus more or less at the same pace.”

Even so, Segal expressed hope that “we are very close to the height, or even at the height of the Omicron wave,” and that after the peak, during which he expects one in every ten Israelis to test positive, “there will be a relatively fast decline.”

Many continue to harbor serious doubts as to the COVID shots’ safety, and regardless of vaccination status, in America most people below age 65 face less than a 1% risk of dying from COVID in the absence of other negative health factors, such as obesity, diabetes, or vitamin deficiency. Further, the majority of American omicron cases so far has been among the vaccinated, and the variant appears to be less dangerous than its predecessors because it targets the upper respiratory tract rather than the lungs.