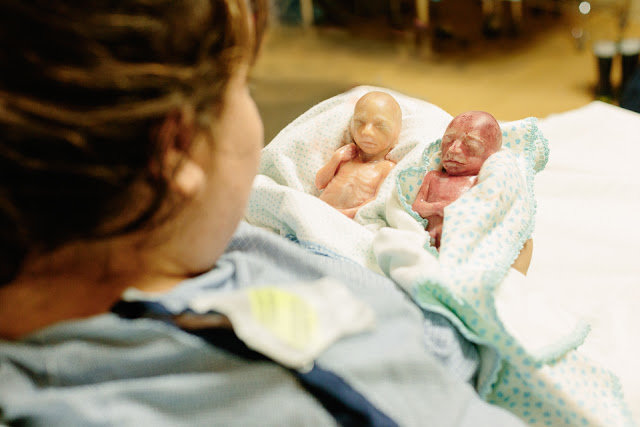 August 13, 2015 (LifeSiteNews) – Recently Heather, a Utah stay-at-home mom, was inspired to post a photo of her twins, Chase and Cooper, who were born last November at just 22-weeks gestation and who lived just 30 minutes after birth, on Facebook.

She decided to post the photo, she says, in light of the recent focus in the news on the issue of abortion, in the hope of raising awareness about the humanity of the unborn child.

“With all this talk of abortion right now, I want people to know that this is what a 22 week old child looks like,” she wrote in the comments above the photo. “This was just minutes after my twins passed away after living and breathing for about 30 minutes last November.”

She added, sadly, “It is legal to abort children at this age in way too many places. While I was holding my babies, wishing they would survive, babies at the same gestation that could have survived are being torn apart and discarded or sold. It makes my heart sad.”

However, Heather was completely unprepared for the response to her photo on Facebook.

Within three days, she says, the photo had been shared 60,000 times, and hundreds of stories started pouring in to her inbox from other parents who had suffered similar circumstances.

In response, she has now created a blog where she is sharing Chase and Cooper’s story, and the stories of others who have gone through similar tragedies.

For years, says Heather, she and her husband struggled with infertility. While they have a six-year-old son, they had always wanted more children. Thus, when they found out last year they were expecting twins, she writes, “We were SO excited.”

From the beginning the pregnancy was high risk, and Heather’s progress was intensively monitored. At 18 weeks, she began to get concerned, after she says she started feeling pressure on her cervix.

While her doctors assured her that everything was alright, she wasn’t convinced. She switched doctors, finding a specialist who diagnosed her with “incompetent cervix” and who said she was going into preterm labor.

Heather and her husband were horrified when doctors offered them abortion at this point, pointing out that the babies were unlikely to be born healthy. “They told us we could just end the pregnancy right there, quick and simple,” she says.

“It broke my heart to even hear it, because I knew we would never do that. We had to fight for our babies! I had seen them in about 10 ultrasounds at that point, and I knew they were alive. I felt them kicking inside of me and they already each had their own little personalities. I just knew we had to do everything we could to try to save them, and we did!”

“Knowing that we tried gives us such peace.”

Doctors tried to stop the progress of labor, but to no avail. Chase and Cooper were eventually born at just 22 weeks, earlier than the normal cut-off time at which hospitals will provide life-saving care for premature babies.

“Once they were born I had to watch them struggle to breathe and wasn't able to help them,” recalls Heather sadly. “But they each died peacefully in our arms, and blessed our lives in that short time more than I could have ever imagined. We know that everything happens for a reason, and that we will see them again some day.”

No life, no matter how short, is lived in vain. But the lives of Heather’s boys have now taken on new meaning, with their photo showing the world just what a baby, even at just 22-weeks gestation, looks like.

“I want to bring a face to these babies who are allowed to be aborted,” she writes on her blog. “I am not here to pass judgement, but to show others that these are not just fetuses or blobs of cells inside of you, they are living babies who deserve a chance at life if you can give it to them.”