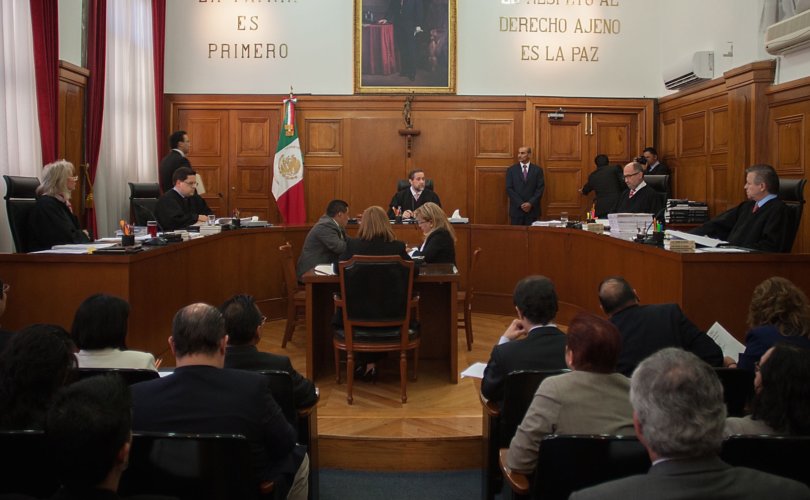 June 23, 2016 (LifeSiteNews.com) – Mexico’s Supreme Court will soon be considering a verdict that would require all of Mexico’s 31 states to legalize abortion-on-demand during the earliest stages of pregnancy.

According to the proposed verdict, which will be examined by the court’s First Chamber on June 29, abortion in the early stages of pregnancy cannot be prohibited under any circumstances by Mexico’s state governments because to do so would inhibit the right of “free development of personality” of women, by impinging on their “dignity and autonomy.”

If the draft decision were to be accepted by the whole court, the states of Mexico would be required to adopt a scheme that is currently in use in Mexico City, which allows abortion-on-demand during the first trimester of pregnancy, and applies restrictions in later stages of gestation of the unborn child. It would also require the states to provide “accessible and affordable” abortion services by establishing clinics to carry out the killing of the unborn.

Hundreds of thousands of unborn children have died by abortion since Mexico City decriminalized the procedure in 2007 and began providing abortion services in the city’s hospitals. In 2009 the Supreme Court ruled that the states had a right to continue prohibiting abortions, a decision that was almost overturned in 2011 and was defended by only a minority of four on the court.

The draft decision was formulated in response to a suit brought by one Margarita Pino Salazar, who claims she sought an abortion from a federal government clinic in Mexico City in 2013, but was turned down in accordance with federal law, which permits abortions only in a few cases, such as rape and fetal deformity. The case will initially be heard only by the court’s First Chamber, which includes only five of the eleven justices of the court, but may ultimately be heard by the whole court in a plenary session.

“The states must adopt measures to ensure the availability and accessibility of legal, safe, and quality abortion services,” writes the author of the draft decision, Supreme Court justice Aurturo Zaldívar Lelo de Larrea. “For this to occur, it is indispensable that the states establish accessible and affordable clinics where women can have abortions.”

“In the period close to conception the State cannot intervene in the private sphere of women without harming their right to decide and their dignity as persons,” writes Zaldívar. “This period can be established by the legislator, as long as such a regulation is reasonable and does not injure other rights in a disproportionate manner.”

Most of the current court was appointed by Mexican presidents Vicente Fox Queseda and Felipe Calderón Hinojosa, both of the nominally pro-life and pro-family National Action Party (PAN). However, the justices they appointed recently sought to impose homosexual “marriage” on the entire country by way of judicial fiat, with only a minority dissenting. Aurturo Zaldívar, the author of the draft decision, was appointed by Felipe Calderón.