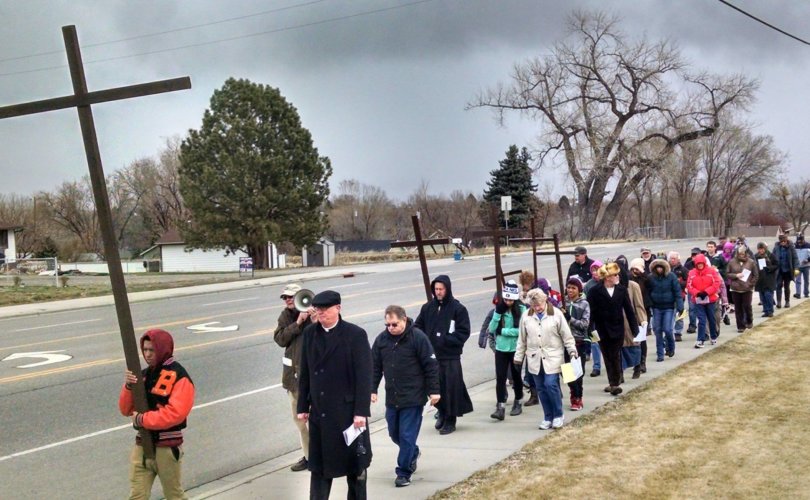 Pro-lifers walk in a Way of the Cross in Billings, Montana

March 30, 2016 (LifeSiteNews) – Good Friday presents a special opportunity each year to unite the suffering wrought by abortion with that of Christ on the cross, with pro-life Christians holding vigils at abortuaries across the U.S. as they commemorate the crucifixion.

Phoenix’s Bishop Thomas Olmsted led a prayer vigil outside the Glendale Planned Parenthood, joined in prayer by priests and deacons of his diocese along with some 350 lay participants.

“We’re here to pray for conversion for ourselves and others and for the protection of life from the womb until natural death,” Bishop Olmsted told the crowd, according to the Catholic Sun. “This is the day Jesus died for us, to redeem us and to bring us the truth that sets us free.”

“Here Good Friday happens every day when the innocent is killed without any protection of the law,” he said. “Injustice is done to the completely innocent. That happened to Jesus on Calvary.”

Bishop Thomas Olmsted: “Here Good Friday happens every day when the innocent is killed without any protection of the law.”

This year on the most solemn of Christian Holy Days, Satanists opted to respond in one case with a pro-abortion demonstration blaspheming Christ’s sacrifice.

Countless Good Friday prayer vigils were conducted by both churches and individual pro-life groups last week, with one initiative re-enacting the Stations of the Cross taking place at more than 80 abortion sites in the U.S. and Canada.

Organized by the Pro-Life Action League, the “Way of the Cross for Victims of Abortion” first began in 2008 as a prayer vigil in Aurora, Illinois.

“In all, 81 ‘Way of the Cross for Victims of Abortion’ prayer vigils were hosted all over the U.S. and Canada,” the League’s Executive Director Eric Scheidler told LifeSiteNews. “This is a 33% increase over last year — the largest increase in a single year.”

Scheidler saw this surge in vigil participation resulting from Planned Parenthood’s involvement in the trafficking of human remains from children aborted at its facilities coming to light over this last year.

“I would attribute this to the uptick in activism in the wake of the undercover videos released last year showing Planned Parenthood involved in harvesting body parts from aborted babies,” he said.

Pro-Life Action League Project Coordinator John Jansen confirmed that all but one “Way of the Cross” vigil was carried out peacefully and without incident, as Satanists showed up in Ann Arbor to disrupt the pro-life event.

“In the current abortion debate, it’s not the fetus, nor the church that suffers—but women who bear the greatest burden,” stated Satanic Temple of Detroit Director Jex Blackmore.

Satanic Temple members performed a “Sanctions of the Cross” demonstration in Ann Arbor, the cross for which represented “the burden of oppressive mandates endured by women.”

Blackmore, who was in the news last December for blogging about her chemical abortion, carried the cross wearing a crown of thorns and a fake pregnancy belly, according to the Daily Beast. Her cohorts wore black suit coats with names on their backs of Michigan legislators who had sponsored pro-life legislation. One Satanic Temple member wore a jacket with an image flipping the middle finger, and carried a grayscale American flag.

“The Satanic Temple believes that all people are entitled to make informed decisions about their health, family and future without coercion,” the Satanists said in a press release. “The philosophical and religious opinions of some should not be used to legislate morality.”

At two other counter protests of Planned Parenthood last August, the Satanic Temple had members dressed as priests pour milk over women acting as though they were kneeling in prayer. The women were tied in ropes to signify oppression from pro-life laws, calling the spectacle a form of worship.

The Satanic group sued the state of Missouri and the United States last fall, claiming that laws restricting abortion violate its members' “free exercise” of religion, and calling abortion a ‘sacrament.’

Scheidler told LifeSiteNews the Satanists’ exhibition demonstrated that the pro-life effort achieved its goal of communicating the sanctity of human life message.

“The appearance of Satanists at the Way of the Cross service in Ann Arbor, Michigan, is a sign that these kinds of prayer vigils are extremely effective and therefore opposed by our enemies, both earthly and spiritual,” he stated. “Fortunately, they did not disrupt the peaceful prayer vigil in Ann Arbor, serving only to draw attention to the event.”

The Satanic display in Ann Arbor didn’t take away from the pro-life witness taking place elsewhere in North America, as participants flooded the “Way of The Cross for Victims of Abortion” Facebook page with reports on their respective vigils.

“Little Rock Ar. was blessed to have over 50 prayer warriors who come out to do ‘Way of the Cross for Victims of Abortion,’” posted Marsha Boss. “We plan on making it a yearly event.”

“Over 130 people came out to witness and pray,” a Bucks County Pro-Life Coalition post stated of the Warminster, Pennsylvania, vigil. “Sadly, over 20 women entered this place for abortions, but we know of one woman who changed her mind and left.”

“It was a moving experience,” Mickey Kelly posted on the Philadelphia vigil.

“We prayed for an hour outside of Planned Parenthood. Then practiced ‘crosswalk’, which missionaries collected intentions from people around the city that we’re offered at the 3 p.m. service, and reenacted the Stations of the Cross en route to the cathedral.”

It was a very busy Good Friday for the abortion business in Southfield, Michigan, Barb Tagley said. “We were grateful to be there to console the heart of Jesus and to pray for those who died inside.”