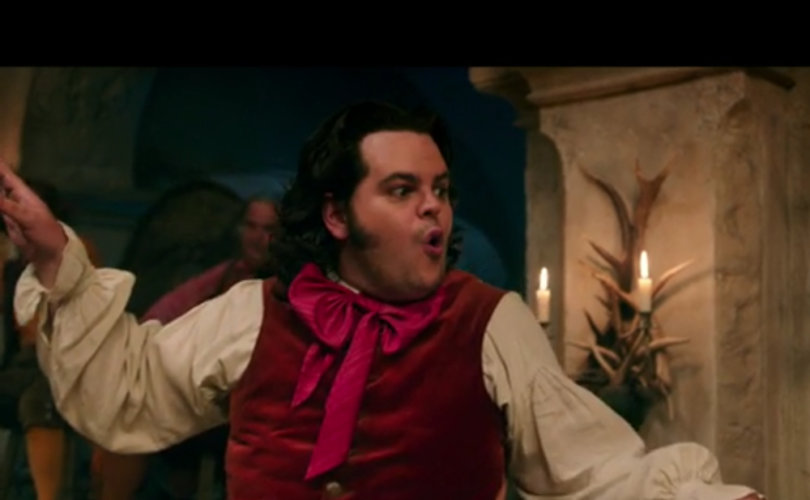 March 6, 2017 (LifeSiteNews) – More details have emerged about the “exclusive gay” moment in Disney’s upcoming Beauty and the Beast remake initiated by the character Le Fou in a scene with Gaston.

According to a report by The Charlotte Observer’s Lawrence Toppman, the action goes like this:

“For approximately four seconds, in a ballroom full of swirling male and female dancers who are changing partners, a young man whirls into the surprised Le Fou’s arms, and they dance happily away together. He does appear to be the first character acknowledged as gay in a Disney movie, whether animated or live-action, though rumors have long buzzed about Timon and Pumbaa in The Lion King and others.

Earlier scenes suggest Le Fou’s sexual uncertainty. He dances mincingly around a tavern during the song “Gaston,” then gives his idol a shoulder rub while singing his praises to assembled townspeople. A bit later in that number, he spins across the room and lands on the reclining Gaston’s lap, wrapping Gaston’s arms around him. “Too much?” he asks. The startled Gaston (Luke Evans) nods.

A trailer released for the new Beauty and the Beast film blatantly suggests LeFou’s flirtation with same-sex attraction, as he dances and sings, praising Gaston in campy fashion.

In an interview published early last week, director Bill Condon had said of Le Fou’s same-sex attraction scene that actor Josh Gad “makes something really subtle and delicious out of it.”

Condon then said there’s a payoff in the end that he doesn’t want to give away. “But it is a nice, exclusively gay moment in a Disney movie.”

Gad had tweeted of the news, “Beyond proud of this.”

But then at the movie’s world premiere last Thursday, CBN News reported, both Condon and Gad sent contradictory messages, seeming to play down the gay issue.

However, Gad then said, “There was nothing in the script that said 'LeFou is gay.'” Condon offered, “I think (LeFou's sexuality) has been a little overstated.”

Public backlash has continued since the news surfaced last week. LifeSiteNews’ petition calling for a boycott of Disney over the Beauty and the Beast remake has yielded over 100,000 signatures in a few days.

The once beloved producer of wholesome films and television programming for children, Disney has been slipping homosexual characters into some of its TV programming on various channels for years.

Christian evangelist Franklin Graham criticized Disney over the scene in a Facebook post Thursday. He also took aim at the company’s decision to broadcast a same-sex kiss in a children’s cartoon for the first time in its series Star vs. the Forces of Evil.

“They’re trying to push the LGBT agenda into the hearts and minds of your children,” he said. “Watch out!”

“I hope Christians everywhere will say no to Disney,” he continued. “I met Walt Disney when I was a young boy — he was very gracious to me, my father Billy Graham, and my younger brother when we visited. He would be shocked at what has happened to the company that he started.”

The same-sex cartoon kissing prompted a petition from One Million Moms that had more than 45,000 signatures by Monday morning. It also mentions Le Fou.

“I do not agree with the LGBT agenda you are pushing on families and children,” it states. “You will not have my support as long as you continue to veer away from family-friendly entertainment.”

A family-run drive-in theater in Alabama announced on Facebook that it would not show the film. The owners said if they couldn’t take their grandchildren to a movie then they themselves shouldn’t be watching it.

“If I can't sit through a movie with God or Jesus sitting by me, then we have no business showing it,” they wrote. “We are first and foremost Christians. We will not compromise on what the Bible teaches.”

Condon responded to the drive-in owners’ decision Friday by telling USA Today the uproar is “overblown.” The drive-in's Facebook page has since been deactivated.

“My message is: This is a movie for everyone,” Condon stated. “I’m sad about that theater, but there are 4,000 theaters showing the movie. I hope everybody moves past that and just goes to take pleasure in what we made.”

Condon expressed regret for having revealed the scene’s content, saying he wished audiences could have been surprised.

“I wish it were — I love the way it plays pure when people don’t know and it comes as a nice surprise,” he stated in a report from the Daily Mail.

Asked whether he wishes audiences could see the movie without knowing about the 'gay' scene, Condon replied, “To not make a big deal of it. Why is it a big deal?”

The “exclusively gay moment” may get the Disney flick banned in Russia, the BBC reported.

Russian culture minister Vladimir Medinsky said the country will take action, and an MP criticized the film as “shameless propaganda of sin.”

Disney is also getting pushback from the LGBT lobby for not going far enough. Some are complaining on social media because Le Fou isn’t a lead character and he’s not a sufficiently positive representation for gays.

One tweet said, “Making a fawning villain gay is NOT a gift to the gay community or even original. It’s an offensive stereotype.”

Another stated, “The people cry, “gay representation please” Disney replies “gremlin from beauty and the beast has canon gay feels for gaston! Rejoice!”

“Disney's making its first gay character with LeFou and he's a clownish sidekick who exists to prop up his straight best friend,” a third tweet said. “Great job.”