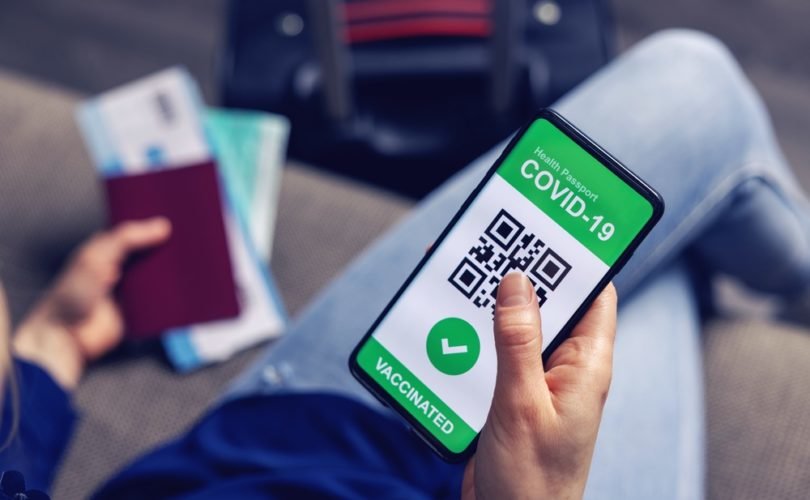 April 16, 2021 (LifeSiteNews) — While far-left states implement or plan to implement digital health “passports” that show proof of COVID-19 vaccinations, more Americans are pushing back against such schemes, with some red states banning or working to ban them.

Rep. Andy Briggs (R-AZ) has introduced a federal ban on vaccine passports, but it’s unlikely House Speaker Nancy Pelosi (D-CA) will bring the bill to the floor for a vote.

Americans and supporters of freedom around the world have panned “vaccine passports” as discriminatory, coercive, antithetical to civil rights, and a form of “medical apartheid.”

New York became the first American state to implement a so-called health passport through the “Excelsior” pass. The roll-out has been a disaster, though, with journalist Jordan Schachtel describing it as having the “markings of a five alarm dumpster fire.” Out-of-state visitors can’t use it, the app isn’t compatible with older operating systems, and there’s zero user privacy. All that’s needed to look up any New Yorker’s vaccination status or recent coronavirus test results is that person’s first and last name, date of birth, and zip code.

Hawaii is following suit, though. “Dreaming of a trip to Hawaii later this year?” asked Forbes on April 12. “Beginning this summer, fully vaccinated travelers will not have to show a negative Covid-19 test or quarantine.”

This is because “Hawaii Governor David Ige officially gave the green light last Friday for a vaccine passport program that could roll out as early as May for inter-island travel and expand to out-of-state travelers by summer.”

“The Aloha State is reportedly working with the developers of multiple apps — Clear, CommonPass and FirstVitals — to streamline integrating a pre-flight vaccination verification process into the state’s Safe Travels program for travelers arriving by plane to the 50th state. Unvaccinated travelers can also avoid the state’s mandatory quarantine if they upload a negative Covid test administered within 72 hours from the final leg of departure.”

According to Hawaii Travel Guide, “Based on the press conference that Governor Ige’s office held on April 5, 2021, we feel fairly confident that CommonPass and/or CLEAR Health Pass, or a combination of both, will be used by travelers for vaccine verification in Hawaii.”

“I do like the idea, though, that everybody will have with them easily on their device — most people carry their devices with them — some way to show that they’ve been vaccinated,” the governor said.

Meanwhile, states like Florida, Texas, and Idaho are pushing back against vaccine passports.

Gov. Greg Abbott of Texas issued an executive order banning government-mandated vaccine passports in his state. His EO reads in part, “… the Constitution does not empower the federal government to mandate nationwide vaccine passports for COVID-19, and Texas will not impose such vaccine passports with the police power that is reserved to the States … under our system of federalism …”

However, some are criticizing Abbott’s executive order for being “weak” because it does nothing to stop businesses from imposing vaccine passports.

Gov. Ron DeSantis of Florida has taken a stronger stance against vaccine passports. DeSantis was actually the first governor to issue an executive order prohibiting businesses, government, and public venues “from demanding proof of Covid-19 vaccination from individuals.”

The Florida governor’s executive order states that “requiring so-called COVID-19 vaccine passports for taking part in everyday life — such as attending a sporting event, patronizing a restaurant, or going to a movie theatre — would create two classes of citizens based on vaccination …”

Gov. Brad Little of Idaho was the third to issue a ban on vaccine passports.

“Idahoans should be given the choice to receive the vaccine,” Little said in a statement. “We should not violate Idahoans’ personal freedoms by requiring them to receive it. Vaccine passports create different classes of citizens.”

The following governors have spoken about vaccine passports with varying degrees of passion and made varying promises: