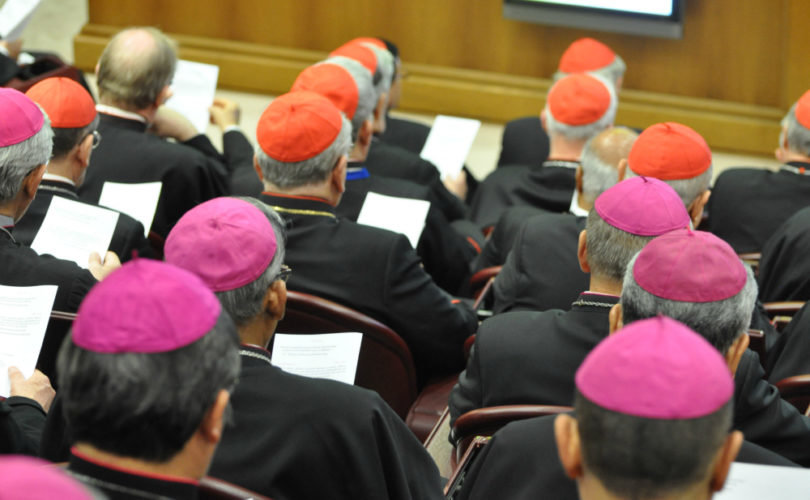 ROME, October 27, 2015 (LifeSiteNews) – Despite numerous concerns we and others have raised about the Synod’s final report, it is clear from it that faithful bishops worked hard to amend the Synod’s much-criticized working document, the Instrumentum Laboris, to make it more Catholic.  The fruits of their labours can be seen throughout the final report.

Contraception and openness to life

We see in paragraph 7 a reference to the “falling birth rate” blamed on “industrialization, the sexual revolution, the fear of overpopulation, economic problems, the growth of a contraceptive mentality and abortion.” Paragraph 8 criticizes “a certain vision of feminism” which denounces “motherhood as an excuse for the exploitation of women” and regards motherhood as an obstacle to women’s fulfillment.

Paragraph 13 recognizes problems such as the “demographic crisis” as a result of unwelcoming attitudes toward newborn life. Again in paragraph 32, the Synod Fathers speak of “population decline, due to anti-birth mentality and promoted by global policies of ‘reproductive health.’”

Paragraph 62 contains the richest teaching on openness to life. “The presence of large families in the Church is a blessing for the Christian community and for society,” it says, “because openness to life is an intrinsic requirement of conjugal love.”  The section speaks of the Church’s deep gratitude to families that welcome and educate children, especially those with disabilities.  It goes on to say we must listen to the beauty and truth of “an unconditional openness to life,” which is “what human love needs to be lived to the full.”

Paragraph 62 concludes with a call to make more use of magisterial documents that promote the culture of life.  The next paragraph specifies that both Humanae Vitae and Familiaris Consortio “must be rediscovered in order to awaken the willingness to procreate in contrast to a mentality that is often hostile to life.”

In paragraph 63, after noting the acceptability of natural family planning in the context of limiting births, the Fathers call for an increased stress on the fact that “children are a wonderful gift from God, a joy for parents and for the Church” through whom “the Lord renews the world.”

The first mention of abortion appears in paragraph 7 and is cited as a cause, among others, of the falling birth rate. Paragraph 27 links exploitation and violence against women to “abortion and forced sterilization.”

Paragraph 13 hints at euthanasia as it warns against the growing perception of the elderly as a burden. Paragraph 20 speaks of “euthanasia and assisted suicide” as “serious threats to families worldwide” that are now legal in many states.  The Church, it says, “firmly opposes these practices” promoting in every way human worth and dignity until the natural end of life.

The major section on life is paragraph 64, which recalls that “life is a gift of God” that must not be discarded at its begging and ending stages. The paragraph quotes Pope Francis against a throwaway culture and calls on the family, supported by the whole of society, to accept unborn life and care for life in its last stages.  Quoting Pope St. John Paul II’s Gospel of Life, the Synod Fathers speak of the “tragedy of abortion,” recall the “sacred and inviolable character of human life,” and affirm they are concretely in favor of life.

It praises the Catholic institutions that counsel pregnant women, support single mothers and comfort those who have suffered abortion.  It reminds Catholics in the medical profession that they have a “moral obligation of conscientious objection” when asked to engage in anti-life practices.

With urgency, it says the Church asserts the right to die naturally without euthanasia.

Paragraph 63 states “the Church rejects with all its might the enforcement actions of the state in favor of contraception, sterilization and even abortion.”

Paragraph 8 disdains the “growing tendency to conceive a child as a means of self-affirmation” to be achieved by any means. Paragraph 27 warns of the negative consequences of surrogate motherhood and of the trade in gametes and embryos.

Paragraph 33 tackles the “biotechnology revolution” decrying the manipulation of procreation separating it form the conjugal act, and opening it to be based on the whims of individuals or couples, not even only heterosexual couples.

Gender ideology is first mentioned in paragraph 8, which warns against it, saying the ideology creates problematic educational and legislative proposals “radically decoupled from biological diversity between male and female.” Paragraph 16 returns to the gender theme, noting by way of ‘ecology’ the need to “learn the meaning of the and the language of loving male-female differences” that work together in the design of the Creator.

Paragraph 83 recognizes with appreciation the “testimony of those who even in difficult conditions do not undertake a new union, while remaining faithful to the sacramental bond.”  Calling on the Church to support such people, the Synod Fathers say those who are “separated or divorced but have not remarried” are often “witnesses of marital fidelity.”

Importance of the family

Paragraph 67 speaks of parents’ unique role in the education of their children. It warns that this is being undermined by an invasive media presence in the family and the tendency to delegate this crucial task to third parties.

Homosexuality and other illicit forms of sexuality

Paragraph 25 laments the spreading tendency of “living together before marriage” or mere cohabitation without the intent to marry. It adds that civil union legislation thus “undermines marriage and the family.”  Paragraph 32 deplores the ubiquitous “cultural tendencies that seek to impose a sexuality without limits.”

Paragraph 63 says in the “order of creation … conjugal love between a man and a woman and the transmission of life are ordered one to the other.” The Creator, it says, “made man and woman share in the work of its creation and at the same time made them instruments of his love, entrusting to them the responsibility for the future of humankind through the transmission of human life. “

Paragraph 76 notes it is “completely unacceptable that the local churches suffer pressure” from international bodies making financial aid for poor countries contingent on “the introduction of laws that establish the ‘marriage’ between persons of the same sex.”