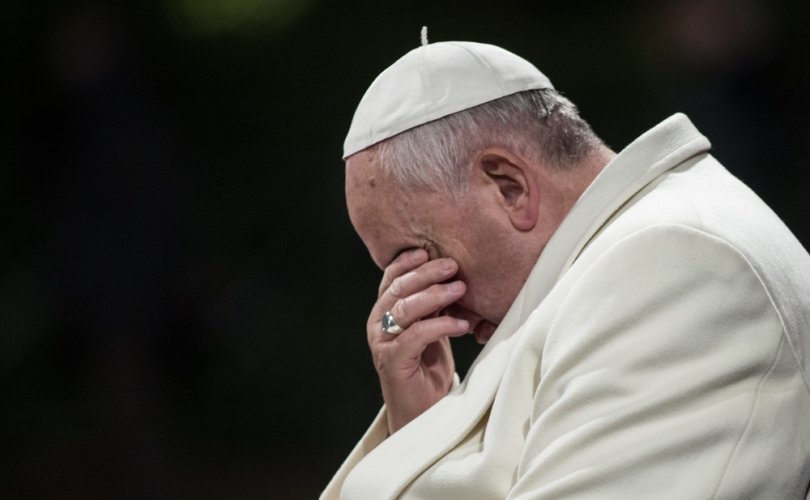 ROME, December 12, 2017 (LifeSiteNews) – As “lovers of the papacy,” the critics of Amoris Laetitia wish to spare Pope Francis a fate worse than Honorius, the only pope to have been formally condemned for heresy. But those who close their eyes to the present situation are only “encouraging him down that path.”

These remarks, by Italian philosopher and Church historian, Professor Claudio Pierantoni, have come in response to Rocco Buttiglione’s latest interview with Vatican Insider.

In the interview with Vatican Insider’s Andrea Tornielli, one of Pope Francis’ closest media advisors, Buttiglione said there are some cases when divorced Catholics who have not obtained an annulment and are living in an sexually-active second union “can be considered to be in God’s grace” and so “deserve to receive the Sacraments.”

“It seems a shocking novelty,” Buttiglione acknowledged, “but it is a doctrine that is entirely, and I dare say rock-solidly, traditional.”

In the interview, Buttiglione also accused critics of Amoris Laetitia of falling into “ethical objectivism” and said that those who have charged the Pope with permitting the spread of heresy, at least by omission, are guilty of “calumny, schism and heresy.”

Cardinal Walter Kasper echoed Buttiglione’s comments last Thursday in a commentary for Vatican Radio’s German edition, saying: “The admission of remarried divorcees to the sacraments in individual cases is based on the teaching of tradition, especially of Thomas Aquinas and the Trent Council.”

“It is not a novelty, but a renewal of an old tradition,” Cardinal Kasper said. The flaw in the critiques of Amoris Laetitia, he added, is “a unilateral moral objectivism that undervalues the importance of personal conscience in a moral act.”

In his commentary, Kasper praised Pope Francis’ official endorsement of the Argentine bishops’ guidelines (by publishing them in the Acta Apostolicae Sedis) and said he hopes it will end the “tiresome” debate over Amoris Laetitia.

Yet other high-ranking prelates, such as former prefect of the Congregation for the Doctrine of the Faith, Cardinal Gerhard Müller, have suggested Pope Francis appoint a group of cardinals to debate his critics in order to resolve the impasse.

Claudio Pierantoni, one of the lay scholars who helped shape the Filial Correction, has been a chief contributor to theological debate on the topic over the past year. Born in Rome, Pierantoni is currently a professor of Medieval Philosophy in the Philosophy Faculty of the University of Chile (Santiago). He has two PhDs: in the History of Christianity and in Philosophy.

The latest interview with Rocco Buttiglione on Amoris Laetitia strikes me as interesting and useful, as it expresses the philosopher’s thought in a synthetic and linear way without undue complication and digressions. This makes it much easier to identify and respond briefly to the main fallacies that afflict it. Buttiglione begins by saying that, thanks to his book and Cardinal Müller’s preface:

for the first time the critics have been forced to respond and cannot deny one point: there are mitigating circumstances in virtue of which a mortal sin (a sin that otherwise would be mortal) becomes a lighter sin, which is only venial.

Here, I would point out that critics have already responded, saying they have never denied the doctrine of extenuating circumstances taken in general: I myself had done so in all of my articles on Amoris Laetitia, beginning in September 2016, as well as in many private letters to Rocco Buttiglione. What Buttiglione says here is, therefore, demonstrably false. However, what I especially wish to point out here is the fallacy of the consequences Buttiglione draws from this statement, as though these conclusions were obvious. Buttiglione writes:

There are therefore some cases in which remarried divorcees can (through their confessor and after suitable spiritual discernment) be considered to be in God’s grace and therefore deserving of receiving the sacraments. It seems a shocking novelty, but it is a doctrine that is entirely, and I dare say rock-solidly, traditional.

Note the rush and superficiality (certainly not justified by the mitigating circumstance of a lack of intelligence) with which Buttiglione jumps to the twofold consequence: in the first passage, he draws from the general doctrine of extenuating circumstances the immediate consequence that “remarried divorces can be considered to be in God’s grace.” With this, he skips over the strong objections that we critics have raised without even responding to them.

When someone confesses a sin, even if the confessor is able to assess that there have been mitigating circumstances in the past, the logical consequence is that the sinner renounces committing the sin in the future. If this were not the case, he would not be dealing with a sin, and so it wouldn’t make sense to speak of mitigating circumstances. If the penitent thinks he can continue to act in this way, he is affirming that “given the situation” the action wasn’t really, in fact, a sin, but rather the right thing to do. And this is precisely what situational ethics says, which in vain Buttiglione seeks to separate from AL. In this case, adultery wouldn’t be intrinsically evil, as Catholic moral theology states, but would be so “according to the case.”

Ultimately we are faced with a clear dilemma: either the irregular situation is sinful, or it isn’t.

If we say that it is sinful, then even though it might be mitigated by circumstances in the past, it must be forsaken in future. If instead, we say that it is not sinful, then we aren’t talking about extenuating circumstances anymore, but rather we fall head-on into situational ethics, which states that adultery is not always evil, but only in certain cases. And if this is true for adultery, then there’s no reason why it can’t be true for other actions which are considered to be intrinsically evil in Catholic doctrine. This would be the “atomic bomb” effect of which Joseph Seifert spoke.

When the confessor determines that there have been extenuating circumstances for the sin committed, it doesn’t follow, as Buttiglione claims, that the person “can be considered to be in God’s grace.” He may well be before God, and so we should never be so bold as to judge the inner life of a person, as Jesus teaches us. But it does not follow from this that the priest has the power to penetrate God’s gaze and decide positively that a person is in the state of grace. That a person is actually in God’s grace (in the secret of his mind and heart) is something completely different from the fact of being able to be considered such positively, in relation to ecclesiastical discipline. This creates enormous confusion, as pointed by all the best critics of AL.

And here we come to the second point. In the second consequence Buttiglione states:

and therefore [the divorced and remarried] deserve to receive the sacraments.

Now, were we actually to suppose that in some cases the priest, through a supernatural charism, had the power to penetrate the divine gaze in order to decide that a person is in God’s grace (something which neither AL nor Buttiglione maintain), it does not follow that the divorced and remarried would deserve to receive the sacraments. Here, too, Buttiglione jumps to the conclusion without caring in the slightest about the objection that has repeatedly been raised over the past year and a half by dozens, if not hundreds, of critics. This objection is simple and consists in the fact that, according to the Magisterium of the Church, the reason why the divorced and remarried cannot be admitted to the Sacraments is not a presumed judgment about whether or not their soul is in a state of grace before God.

No one would have dreamt of making such a judgment, either before or after AL. The reason, instead, is their objective situation (= visible, verifiable) which stands in contrast with the objective situation for the reception of the Sacraments. The reception of the visible Sacraments of a visible Church has to correspond to an objective, visible situation. Otherwise, the visible order of the Church simply ceases to exist. We would no longer have a Catholic and apostolic Church, but a “pneumatic,” pseudo-charismatic or gnostic church, a “church” whose external discipline, if one could still speak in this way, would be subject to the most absolute arbitrariness. It would be “the chaos erected into a system” that Robert Spaemann spoke of in referring to AL.

In fact, the declaration of the Pontifical Council for legislative texts (Declaration concerning the admission to Holy Communion of faithful who are divorced and remarried, June 24, 2000) which is cited by AL precisely in reference to this point, in maintaining that “a negative judgment about an objective situation does not imply a judgment about the imputability or culpability of the person involved,” (AL 302 and note 345) is the same that denies access to the Sacrament, precisely because “the minister of Communion would not be able to judge from subjective imputability.” The same declaration then adds with absolute clarity that “the prohibition found in the cited canon [CIC 915], by its nature, is derived from divine law and transcends the domain of positive ecclesiastical laws: the latter cannot introduce legislative changes which would oppose the doctrine of the Church.”

On the basis of these observations, we may conclude that:

Pope Honorius was anathematized by the Third Ecumenical Council of Constantinople (680) for far less than this. The anathema was then confirmed by Pope Leo II, “for he did not extinguish immediately the flame of heretical teaching, as ought to be done by apostolic authority, but through his negligence he fostered it.” (See my intervention at the recent conference “Bringing clarity – The necessary coherence of the Magisterium with Tradition: examples from history,” Rome, April 22, 2017.”

We critics, as sincere lovers of the papacy, wish to spare Francis Honorius’ fate (or perhaps one even worse). Those instead who close their eyes to the present situation are encouraging him down that path. We do not presume to judge the internal forum of anyone. But unfortunately, from an objective point of view, we cannot seem to detect any extenuating circumstance in this behavior.