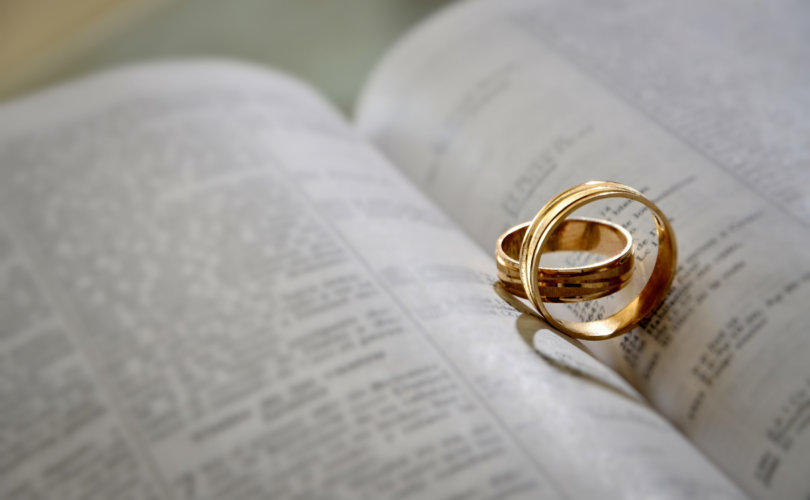 WASHINGTON, D.C. (The Daily Signal) — The Heritage Foundation is investing $1.3 million in an ad campaign to highlight concerns for religious freedom posed by the so-called Respect for Marriage Act now before Congress.

“The bill puts a target on the backs of people of faith who believe that marriage is between one man and one woman, opening individuals and organizations to legal action if they hold true to their religious beliefs about marriage,” Heritage said in a press release Wednesday.


The bill goes far beyond just codifying same-sex marriage and “would expose religious schools and non-profits to lawsuits and attacks from the [Internal Revenue Service] just because they believe in traditional marriage,” the Heritage ad warns.

The ad – which will run on Fox News for five days and during college football and NFL games in Iowa, Indiana, West Virginia, and Wyoming over Thanksgiving weekend – highlights the “unnecessary and divisive” nature of the “deceptively named” bill.

Last week, all 50 Democrats in the Senate and 12 Republican senators voted to begin debate on the Respect for Marriage Act.

We still have time to protect religious liberty. We’re asking our colleagues to support my amendment. pic.twitter.com/y7JXkxNXTZ

Lee (R–UT) introduced an amendment to the bill that would add religious liberty protections for Americans who hold to a tradition view of marriage. Democrats are refusing to hold a vote on the amendment.

“America’s religious liberty is under attack with this impending vote in the Senate,” Kevin Roberts, president of The Heritage Foundation, said upon the announcement of the ad campaign.

“This legislation does not add one additional benefit to same-sex couples in the United States,” Roberts said, adding it is an “attack that sets the stage to take rights away from people of faith. What it does accomplish is deputizing radical activists to target Americans who cannot in good faith endorse anything other than a man-woman marriage. The American people deserve all the facts.”

The Heritage Foundation is investing $1 million in the ad campaign, and Heritage Action for America is running $300,000 in digital ads that feature a call to action.

Jessica Anderson, executive director of Heritage Action, says the Senate should not be considering such a “significant piece of legislation” during a lame-duck session.

“Congress should wait until the next session to consider significant pieces of legislation,” Anderson said. “In the short term, the only proposal that would rectify conservatives’ concerns over religious liberty in this bill is Utah Sen. Mike Lee’s amendment.”

The Senate will hold another vote on the Respect for Marriage Act next week.