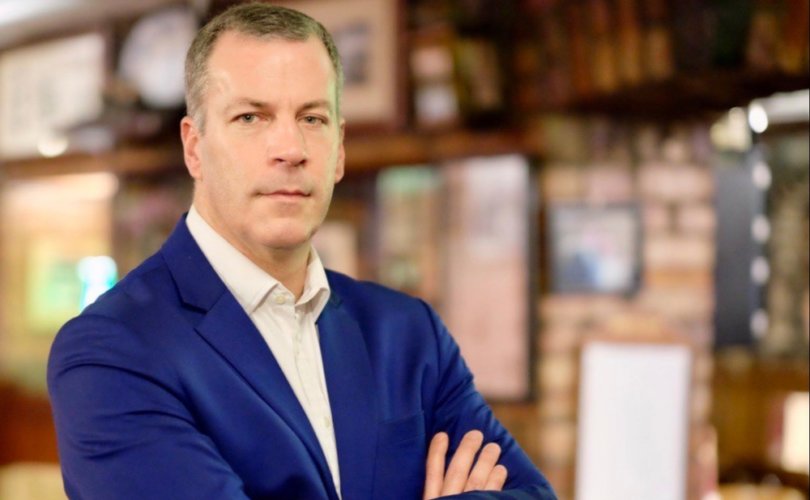 IRELAND, January 28, 2019 (LifeSiteNews) – Hermann Kelly, founder of Ireland's new political party Irexit Freedom to Prosper Party, said that his party is pro-life and that abortion is a “stain on the name of Ireland that should be removed.”

“As no nation has a future without children, as a patriotic party we are pro-natalist and supportive of stable families for the procreation, education and rearing of children,” Kelly told LifeSiteNews in an exclusive interview.

“The barbarism of abortion, and the general cheapening of life at its beginning and end is a stain on the name of Ireland that should be removed,” he added.

Just as with Brexit in the United Kingdom, Irexit is in favour of Ireland leaving the EU. Unlike almost all British and Irish political parties, however, Irexit is unashamedly pro-life.

Kelly spoke to LifeSiteNews about the current Irish political and cultural landscape and what contribution his political party can make to a revival in more pro-life, pro-family politics in today's Ireland.

LifeSiteNews (LSN ): You have started a new political party, Irexit Freedom to Prosper Party, why did you feel the need for yet another Irish political group?

Hermann Kelly: We are the only mainstream party calling on all of Ireland to leave the EU and become a sovereign independent state making its own laws, controlling its own budget, its own resources, seas and fisheries. We want to ensure our Supreme Court is just that, that the Irish Parliament in Dublin (Dáil) is the only place where laws affecting Irish people are made. Basically, we want to take back the power to ensure the Irish people alone have the sole right to decide our laws in our own land. We are a patriotic and Republican party, which wishes to bring a united Ireland by consent.

We are tired of people we did not elect nor able to get rid of, making our laws and charging us a fortune for the ‘privilege’ (For example, Ireland gave 1 Billion euro net to the EU budget in 2018).

We also stand for liberty – freedom of speech, of association and religion. We want to slim down the state, lower the bite of taxes and promote personal responsibility and make Ireland and Irish people truly free again. By leaving the political union based in Brussels, we want to uniquely take control of our foreign and security policy and maintain a meaningful military neutrality.

We hold that Ireland is our home, not an economic hostel, and that the Irish diaspora has a special part to play in rebuilding up our country again.

LSN: You are pro-life – is your party?

Kelly: Yes, very much so. Indeed I was the last person on Irish national TV calling for a ‘No’ vote the day before the abortion referendum on the 1 o’clock news. Different people prefer different words: pro-life, pro-baby, in our political program we use the term pro-natalist.

As no nation has a future without children, as a patriotic party we are pro-natalist and supportive of stable families for the procreation, education and rearing of children. The barbarism of abortion, and the general cheapening of life at its beginning and end is a stain on the name of Ireland that should be removed.

LSN: How does the pro-life aspect of your party’s philosophy fit into the overall political strategy of leaving the European Union?

Kelly: Political parties in Ireland predisposed to groupthink make the argument that we need to stay in the EU with open borders and continue to allow mass immigration into our country because our birth rate is now below replacement level and we need new workers for our economy. We reject that and say instead, we must control the quality and number of economic migrants into Ireland while financially and culturally encouraging stable Irish families to have more children. If demographics are the destiny of a nation, then we don’t want the brutal demise or ‘great replacement’ of our children.

LSN: Do you think in the Irish Republic there is an audience for an unabashed pro-life message?

Kelly: A third of the population of the Republic of Ireland voted ‘No’ to the abortion referendum last year. In addition, many people who voted ‘Yes’ now think that the legislation later enacted is quite barbaric in nature.

I believe the North of Ireland which is overall culturally more conservative would be even more pro-life so there is an opening for sure. However it is in the long term useless to be a ‘one trick pony’ party, so Irexit Freedom to Prosper will proffer a whole range of policies on issues which impact the daily lives of ordinary people.  For that reason, we have policies on housing, oppose the Carbon tax, call for reduced taxation to encourage SME’s and businesses to set up in Ireland. We believe in a progressive tax system rewarding work, initiative and merit.

If you want to fix a country, a political party cannot just be about one issue. And we certainly don’t wish to be like Culturally Marxist Sinn Fein just without abortion.

LSN: How do you view the current state of Irish society viewed through a pro-life prism?

Kelly: The political elites of Ireland have turned their face to Brussels and away from what is good for the Irish people. Abortion chambers, antagonism to Church-run schools, talk of transsexual toilets and whispers of euthanasia are starting to be heard. The crime and murder rates have increased dramatically in recent years. Children are receiving non-age appropriate sexual education in schools.

So there is plenty of work to do. But we must confront this head-on, in both political and philosophical terms. It’s too late for soft-soaping and desiring our cultural opponents to like us or our message. Cultural Marxists in Sinn Fein for example are happy to destroy the nation-state, the family and even the distinction between male and female. There is little use accepting their premise, their logic then complaining when you don’t like the conclusion of abortion and EU rule.

Irexit Freedom Party is opposed to Cultural Marxism from beginning to end. We are like rebels in the cathedral of PC Ireland and we are proud of that.

LSN: What is your view on how the mainstream Irish media has influenced this?

I used to be a journalist myself, working for the Irish Catholic and later as columnist in the Irish Mail on Sunday and Irish Examiner newspapers. Overall, the media in Ireland are quite anti-Catholic, anti-nationalist, anti-natalist, pro-EU and very PC. There is a huge problem of unthinking groupthink.

As a party we will defend the separation of powers in the State and oppose the political / media hegemony that allows political and institutional corruption to flourish. We’ll also be utilizing social media in a professional manner to get our message out in an antagonistic media environment.

LSN: What do you think could move Ireland back to becoming a more pro-life country?

Kelly: The realization of the damage that a dying culture and population brings – not happiness, human flourishing and success but less respect for human life in all its stages. Oikophobia (hatred of your own culture and homeland) and hatred of human life itself are closely related.

LSN: You grew up in Derry city during the Ulster Troubles – has this given you an insight into the current abortion debate in Ireland?

Kelly: I grew up in the highly Republican Bogside.  My father was the headmaster of a large primary school in Creggan during these times. I attended St Columb’s College – the alma mater of poet Seamus Heaney, playwright Brien Friel and politician John Hume.

We were brought up at school and in the hurling team I used to play for, to be a conscious and proud cultural vanguard of Irish nationalism. We also had a deep experience of State hatred towards us because we were Irish Catholics.

Northerners have a unique ability to stand up for what we believe in, no matter how many enemies assemble before us. Some people may regard that as a kink, but for many Irish, and hopefully those in Irexit Freedom to Prosper, it will be a strength.