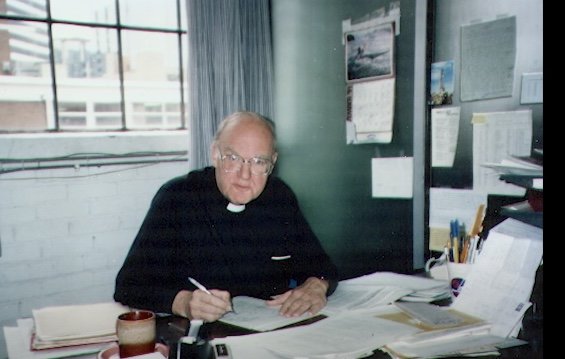 TORONTO, May 15, 2020 (LifeSiteNews) — The late Fr. Alphonse de Valk was a “modern-day prophet” who “thundered” against abortion, denounced sin as an “obstacle to God’s will,”  and was a “godsend” to Canada’s fledgling pro-life movement who always found the right words to lift the spirits of beleaguered pro-lifers.

Those were among tributes paid during the Virtual March for Life’s Wednesday broadcast of a memorial Mass for the Basilian priest, a longtime mainstay of the Canadian pro-life movement who died April 16 at age 88.

He was, in fact, a driving force behind Campaign Life taking on the organizing of an annual March for Life, said Campaign Life president emeritus Jim Hughes in a video tribute.

“He was a man who didn’t take no for an answer, so when Nellie Gray, the founder of the March for Life in Washington, goaded me into starting a National March for Life in Canada, it was Fr. Al who said, ‘Come on, we can do this,’ so away we went.”

The rally on Parliament Hill and march through the streets of Ottawa has since become Canada’s biggest annual pro-life event, and marks May 14, 1969, when the Liberal government of Pierre Trudeau, father of the current prime minister, passed an omnibus bill that opened the door to abortion on demand.

Hughes recalled hiring Fr. de Valk to run the Interim in 1983, the beginning of 30 years working alongside the Basilian in the pro-life movement.

“He was a man dedicated to the lives of the unborn,” and his pride in his priesthood was such that “he wanted to imbue everyone with this whole sense of who God was and the love of God for all of us,” Hughes said.

“At our annual national and Ontario conference weekends, Fr. Al would celebrate Mass and his homilies were just so absolutely beautiful they frequently were the focal point of the whole weekend.”

That was echoed by Steve Jalsevac, co-founder of LifeSiteNews, who recalled that Fr. de Valk would find in his homilies “just the right thing to encourage us, take away our fears, lift our spirits and trust that we were doing the most important work in the world.”

“A prophet, in the biblical sense, is a providential instrument sent by God for the guidance of his people, and that’s what Fr. de Valk did as a leading spokesman in defense of unborn life,” said Fr. Boyd, one of the original founders of Campaign Life.

“I think like all prophets he thundered against a crime which modern society no longer recognized as being criminal,” he added.

“He was haunted by the idea of sin as an obstacle to the will of God. He was, in that sense, a priest who had the uncomfortable role of speaking truths that people in contemporary society did not want to hear.”

Fr. de Valk was “a godsend to CLC, and to Canada, and to LifeSite, with his vast historical knowledge and his ability to churn out exceptionally well-researched, hard-hitting articles faster than anyone I’ve ever known,” noted Jalsevac.

“I worked with this irascible, stubborn and yet also kind and generous Dutchman — I’m half Dutch so I know what that’s about — from the time he first became involved with Campaign Life Coalition in the 1980s,” he recalled.

“His character certainly created challenges and often boisterous disagreements, but you know, that character was also a gift from God for him and for us,” observed Jalsevac.

“It gave him the strength to persevere in fighting the incredibly difficult battles that only a person with such a determined character could continue to face each day, without crumbling or giving in to the strong temptation to take the easy way of compromise.”

Campaign Life relied on Fr. de Valk for guidance and advice, and he “agonized over many of these complex decisions in order to ensure that he was making the correct recommendations.”

But he “never denied Christ to even the slightest degree in his writings and political and other strategy recommendations,” Jalsevac said. “He did not care what man thought but only what God would think.”

While Fr. de Valk was an “excellent” historian and writer, his “essential identity was that of a Catholic priest,” Fr. Di Rocco said in his homily.

“He related everything to his great faith, and its unchangeable truths,” noted Fr. Di Rocco. “It was his priestly identity, united to his keen intellect, as well as his stamina and perseverance, that bore so much fruit.”

The Virtual March for Life broadcast of the memorial Mass was followed by the Virtual Candlelight vigil, hosted by A Guy and A Girl ministry.