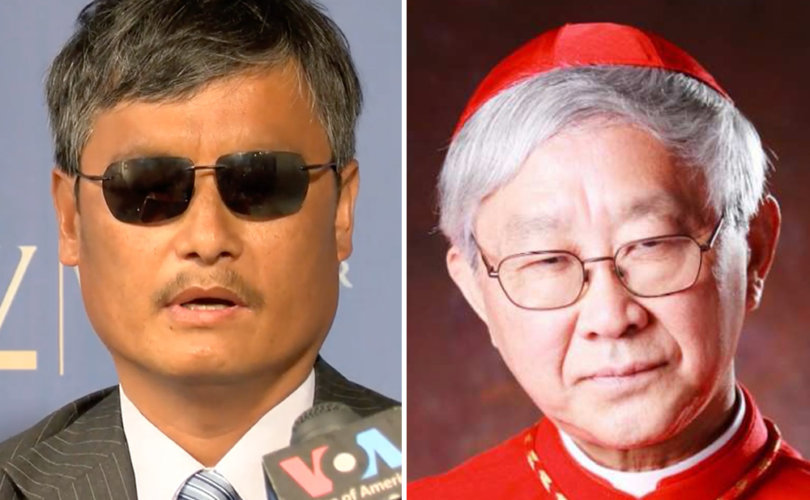 March 27, 2018  (LifeSiteNews) – After China’s leading prelate, Cardinal Joseph Zen, earlier this year sounded the alarm, saying the Vatican “is selling out the Catholic Church in China​” and giving its blessing “on the new…schismatic Church” created by the Chinese Communist Party (CCP), the heroic blind activist Chen Guangcheng added his voice in support of the Cardinal.

“The Vatican’s making a deal with the devil CCP will not only humiliate the Vatican itself but it will also tarnish the church of God that it supposedly represents,” said Chen.

While some Church prelates are asserting that times have changed and that the communist Chinese government is not what it once was, Chen offers a startling counterpoint:  “It is not that China is better than it was at the time of Pope John Paul II,” noted Chen, “rather, it is that Pope Francis is far different from Pope John Paul II.”

Scathing Critique of the Vatican’s Deal with Communist China

If anybody has a right to speak out on the current Vatican/China controversy, it’s Chen.

Blind from a young age, Chen Guangcheng gained international prominence more than a decade ago for bravely suing the government over its brutal “one-child policy,” which has resulted in forced abortions, estimated to be in the hundreds of millions.  Chen was imprisoned by China’s communist government for his activism. In 2012 he escaped house arrest and fled to the U.S. Embassy in Beijing. He and his family were later allowed to leave for the United States where he is now a distinguished visiting fellow at the Institute for Policy Research and Catholic Studies at the Catholic University of America and a senior fellow at the Witherspoon Institute.

In an article published in Chinese on Radio Free Asia last month and translated at ChinaScope.org, Chen offers a scathing commentary critical of the Vatican’s move toward capitulation, which may in fact be finalized in the coming days or weeks.

“I was born and raised in China under the communist despotism. I personally experienced the brutal torture and persecution that the atheists of the Communist Party committed against dissidents,” said Chen.  “They have no fear of God or any moral bottom line; they have committed innumerable murders with a total disregard for human life for the sole purpose of maintaining their reign.”

Chen: The Vatican Has Abandoned Its Principles

In response to the news that the Vatican is now hammering out the details on a deal with China’s communist regime, Chen said, “Beijing will send representatives to the Vatican to sign the agreement.  This, in fact, is the equivalent of selling out God’s home to the devil.”

On Vatican Bishop Sorondo’s Praise for the Communist Regime

Chen also weighed in on Vatican official, Bishop Marcelo Sánchez Sorondo’s incomprehensible praise for China’s communist regime as the best in the world at implementing the social doctrine of the Church.

“In particular, Bishop Marcelo Sánchez Sorondo’s recent remarks are disconcerting. I cannot but ask: Are they pretending to be naive, or are they really that naive? Are they really trying to lead the Catholic Church, which has more than one billion followers, to make a deal with the anti-Christian and antichrist CCP?”

In August last year, Bishop Marcelo Sanchez Sorondo went to China and attended a conference on organ donation and transplantation. At that time he praised China for setting up a global best practice model for eradicating organ trafficking. […]

Sorondo’s willful ignorance is beyond disgusting. I would like to ask him: “Did you know that, last year, 32 college students in Wuhan inexplicably went missing? The CCP did not provide any leads in spite of the ‘Sky Eye Project’ (the CCP uses the grid in which it controls hundreds of millions of cameras to follow the movements of everyone in society). Instead it detained the reporters who called for support for the parents who lost their children!

In China, many children were stolen or snatched while playing in the street. Their organs were later removed and sold. In addition, there are investigative reports by Falun Gong practitioners on organ harvesting as well as reports of the disappearance of some migrant workers for no apparent reason. All these appalling occurrences under the CCP’s rule demonstrate the rampant trafficking of organs in China.

To conduct organ transplants, from the blood test, matching, and removal, to storage, transporting, and transplantation, each step is full of technical challenges. It is not something that any small triads can do. In China where the CCP has a monopoly on control, organ transplants cannot happen without the CCP’s direct involvement. Therefore, we believe that it is the CCP regime itself that monopolizes the ongoing organ transplant business. Is this the best practice model for eradicating the organ trafficking that Bishop Marcelo Sanchez Sorondo spoke of?

The blind activist and the Cardinal, Chen and Zen, share nearly identical views on the Vatican’s pending deal with China.

In an appearance on EWTN’s The World Over two weeks ago, Zen was asked by host Raymond Arroyo, “We now know that one of President Xi’s goals is to inculcate communist thought and blend it with theology.  Are you concerned that the Vatican is playing into his hands? His stated goal is to blend the communist agenda with existing religions. Is that what’s happening here?”

Vatican deal with Communists will ‘backfire for the church’: China expert

Cardinal Zen torches the Vatican and his critics over China deal

Vatican must come to terms with China’s human rights failures