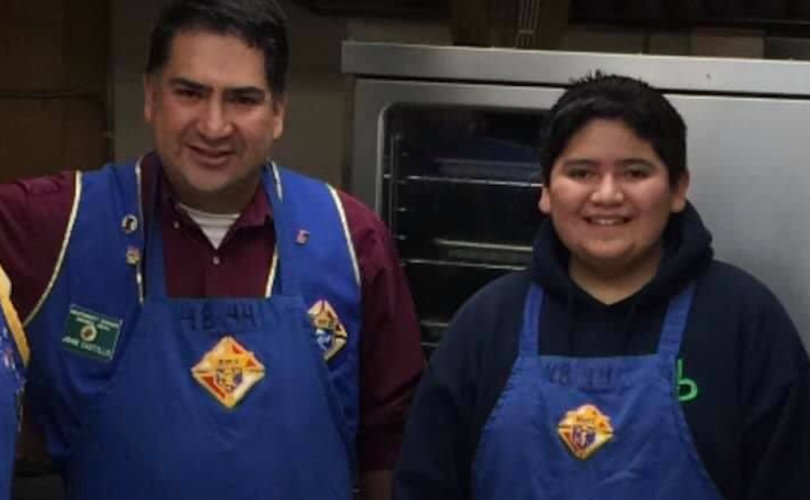 John Castillo with his son KendrickColorado Knights of Columbus Facebook

May 10, 2019 (LifeSiteNews) — A brave, caring hero, a legend, and someone who loved to make others smile are some of the descriptions used for Kendrick Castillo, the 18-year-old high school student who was fatally shot while restraining a shooter in his Colorado classroom Tuesday.

Castillo, a Catholic, inspired other students to come forward to disarm and subdue the attacker and save classmates’ lives.

“A young man who followed Christ & laid down his life for others!” Denver Archbishop Samuel Aquila exclaimed from Italy via Facebook Thursday morning. “May the Lord provide consolation to his family! I will offer Mass for Kendrick & his family here in Rome.”

A security guard reportedly apprehended one of the shooters and the other was said to have been subdued by Kendrick and some of his classmates until police arrived shortly after the shooting began.

Kendrick has been hailed as a selfless hero by family and friends who remembered the brave young man in the days after the shooting.

The best kid in the world

The coroner told Kendrick’s father, John Castillo, that his son was a hero, The Denver Post reported, because the gunfire he took would have harmed other people.

Castillo also praised his son as a hero, though he said he wished Kendrick would have hidden to save himself but that was not Kendrick’s nature. While Castillo is proud of what his son did, the loss is still difficult to accept.

“It doesn’t surprise me,” Castillo told The Post. “He cared enough about people that he would do something like that, even though it’s against my better judgment. I wish he had gone and hid, but that’s not his character. His character is about protecting people, helping people.”

“I had a hard time accepting that,” the father added.

“He was the best kid in the world,” an emotional Castillo said.

A young man with a future

Kendrick, who was just three days shy of graduating high school and set to attend Arapahoe Community College in the fall, loved science, especially robotics. He was the lead fabricator on the robotics team that his father coached.

Kendrick, who was John and Maria Castillo’s only child, had hoped to major in mechanical or electrical engineering.

“My wife and I are in a haze,” John Castillo said. “He was everything to us.”

While Kendrick was an only child, his friends, including the members of the school's robotics team, were like his siblings, his father said. They would host holiday gift exchanges at the their home. As a child, Kendrick shared his toys, he said, and later he would pay for a friend's movie tickets if they didn't have money.

“I know that because of what he did, others are alive,” John Castillo said in a CNN report, “and I thank God for that. I love him. And he is a hero and he always will be. He just loved people that much.”

Castillo most likely drew his heroism from his faith, a PJ Media report said, and that he wanted to be in the Knights of Columbus like his father.

His friend, Cece Bedard, told The Denver Post that their fathers brought them to Knights meetings. Kendrick carried out the organization's mission of helping others, Bedard said.

“He told me he wanted to be a (Knight) because he wanted to help not only people but (also) his community,” Bedard said. “He was the bravest soul I’ve ever met and never even cared what others thought because he was too busy finding ways to make you smile.”

Classmate Aaron Busche said that even in middle school, Kendrick stood out for his selflessness.

“He was not afraid to stand up for what he thought was right,” Busche said. “The way he died was very much in his nature. He always prioritized others before himself.”

A legacy of service, patriotism

Kendrick grew up near Denver speaking English and Spanish and had first attended Catholic school. He also spent time fishing and camping with his late grandfather, who had been a Marine.

“Kendrick was proud of him, proud that his grandfather was a hero,” John Castillo said. “Part of me knows that Kendrick wanted to live that legacy.”

Kendrick had kept the flag that once draped his grandfather's casket close to him and would pray and kiss his tombstone at Fort Logan National Cemetery.

“He loved the patriotism,” John Castillo said. “We are Hispanic by nature, but we love America to the core.”

‘This wasn't your average kid’

Castillo and his wife, Maria, were not surprised to learn that their son ran toward danger; they had raised him to be responsible and “to be good.”

“This wasn't your average kid,” John Castillo said. “He was extraordinary.”

STEM senior and close friend Nui Giasolli also recalled that Kendrick would go with his father to volunteer with the Knights of Columbus, and how Kendrick intended to join the Knights.

Giasolli told NBC News that Kendrick and the classmates who assisted him were brave and saved lives of the other students in the room.

“Kendrick lunged at him, and he shot Kendrick,” Giasolli said, “giving all of us enough time to get underneath our desks, to get ourselves safe, and to run across the room to escape.”

Eighteen-year-old Brendan Bialy, a U.S. Marine Corps recruit, helped Kendrick subdue the shooter. Bialy was not injured in the attack. While he has not yet entered the Corps, the Marines issued a statement on Bialy’s actions during the shooting.

“Brendan’s courage and commitment to swiftly ending this tragic incident at the risk of his own safety is admirable and inspiring,” the Marines’ statement said. “His decisive actions resulted in the safety and protection of his teachers and fellow classmates.” He is scheduled to report to training this summer.

The other STEM student who intervened, Joshua Jones, was treated for two gunshot wounds and returned home to recover.

Jones’ family called him “an incredible son and brother,” according to The Denver Post, and asked for privacy during the healing process.

Bialy recalled that Kendrick was about a foot from the shooter in his classroom and immediately sprang into action.

“Kendrick Castillo died a legend,” Bialy said. “He died a trooper. I know he will be with me for the rest of my life.”

After Bialy was able to get the gun away from the shooter, he checked on Kendrick and tried to get him to respond, but he wasn't moving. Bialy remembers helping a teacher who came into the room and tried to render medical aid.

Shortly after the shooting, John and Maria Castillo frantically tried to reach Kendrick on his cell phone, growing more concerned when he would not answer their texts and calls.

One of Kendrick's friends sent Castillo a text saying Kendrick had rushed toward the shooter, but at the time, he didn't know exactly what to think.

The Castillos watched as other students exited the yellow school buses and reunited with their parents, “and we didn't have that,” Castillo said.

“I couldn't believe this was happening to my son,” he said.

The couple learned Kendrick had been killed when they arrived at the hospital looking for him, and authorities informed them his body was still inside the classroom.

As they waited to see Kendrick, students approached them and said their son was a hero.

As they mourn their son, John Castillo said the couple’s wish was for Kendrick's classmates was to heal, go to college, get married and start their own families surrounded by love.