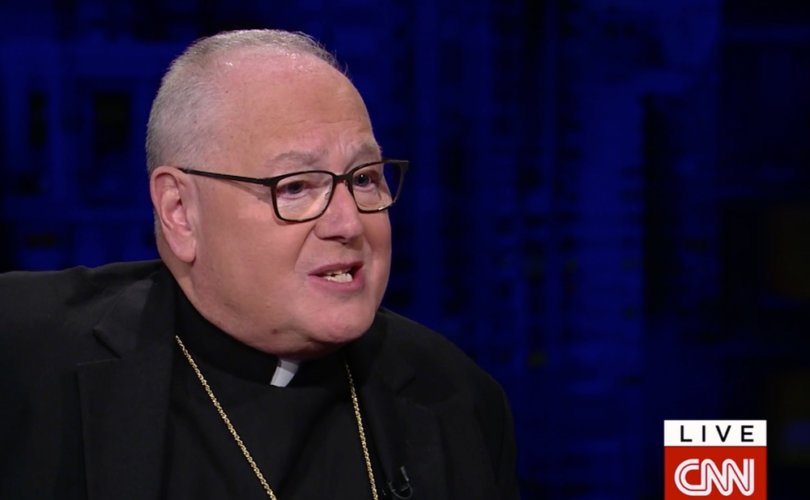 NEW YORK, New York, September 13, 2018 (LifeSiteNews) – New York’s Cardinal Timothy Dolan has come to the defense of his “friend” Cardinal Donald Wuerl, the embattled archbishop of Washington, D.C. who is facing pressure to resign over inaction on sex abuse.

“Now we’re seeing major Church leaders having to resign,” CNN’s Christiane Amanpour pointed out during an interview with Dolan. “You’ve got Cardinal McCarrick, you’ve got Cardinal Wuerl – who is potentially gonna be resigning – first and foremost, do you agree with that? Cardinal Wuerl is accused of basically having known about the abuse [and] will meet the Pope to offer his resignation. Should he be resigning?”

Theodore McCarrick, who was an auxiliary bishop of New York and later archbishop of Washington, D.C., resigned as a cardinal earlier this summer after the Archdiocese of New York found “credible” allegations he’d molested a minor decades before and former seminarians and priests said he’d abused them as well. A man who was the first baby McCarrick baptized revealed that McCarrick had molested and sexually abused him beginning at age 11 and through young adulthood.

Wuerl is in hot water both for his claims he knew nothing about his predecessor’s predation and for what a Pennsylvania grand jury report revealed about his role in sex abuse cover-up when he was the bishop of Pittsburgh. Wuerl technically already submitted his resignation to Pope Francis three years ago when he turned 75, but it has not been accepted. That appears to be imminent, however, with Wuerl announcing an upcoming trip to Rome to discuss his resignation.

“Look, I gotta be personal. He’s a good friend and he’s a tremendous leader among the bishops,” Dolan answered. “I kinda hope he doesn’t resign. We need him. We need him for reform – cause he’s been a great source of reform in the past, even, not taking away the fact that you just said – I trust him enough that if he thinks he needs to resign for the good of the Church, he will. And I would respect that decision and support him.”

“If I read it right, he had a very good record of being aggressive against abuse,” Dolan continued. Amanpour pushed back against this, saying, “he’s alleged to have known about this abuse.”

“This one case, right? I’m afraid he may be being judged on pre-Dallas standards,” said Dolan, referring to the 2002 charter of U.S. bishops on dealing with clerical sex abuse. McCarrick played a role in creating that charter and was one of its main publicizers as the American hierarchy tried to do damage control that year.

“But I don’t wanna argue with ya,” Dolan said. “The fact does remain that even after the reforms of Dallas in 2002, apparently this priest remained. He’s [Wuerl] apologized for that, that does make me angry, that is a cause, uh, for, uh, for anger.”

Dolan and Wuerl represent, in a sense, the “old guard” of U.S. bishops. Although not aggressively orthodox, the two rose to prominence during Pope Benedict XVI’s pontificate. Dolan is the former president of the U.S. Conference of Catholic Bishops (USCCB) – he was elected in 2010 – and is a dynamic orator who, despite not having a handle on some of the LGBT-promoting parishes and priests in his diocese, has made powerful statements in support of the pre-born’s right to life.

Although Dolan famously capitulated to LGBT activists, allowing them to participate in New York’s St. Patrick’s Day parade, and applauded Michael Sam for announcing his homosexuality (“Bravo!”), neither he nor Wuerl is as radical as some in the clique of Francis-appointed prelates including Cardinals Joseph Tobin and Blase Cupich and Bishop Robert McElroy. This difference has manifested itself at USCCB meetings, particularly when Wuerl and Dolan teamed up to defend making the organization’s religious liberty committee permanent.

Dolan: Terrible stories of abuse crisis ‘not new to me,’ homosexuality is not the ‘sole root’

Cardinal Dolan denied that the “sole root” of the sex abuse crisis is homosexual clergy. The majority of victims of clerical sex abuse have been teenage males, according to the John Jay Report and the Pennsylvania grand jury report.

“It’s not about gay or straight, liberal or conservative, Viganò or Pope Francis,” the Cardinal said, referring to the former’s 11-page testimony accusing the pope and high-ranking Church officials of complicity in the McCarrick cover-up. “It’s about right and wrong.”

Both Amanpour and Dolan acknowledged that the sex abuse crisis is not a uniquely American problem.

Amanpour brought up the “report from Germany” on over 3,000 abuse victims that was leaked on Wednesday. Dolan noted the crisis has affected other countries as well, such as Ireland, Chile, and Australia.

Dolan said this summer has been a “disaster” for the Church, consisting of “one crisis after another,” such as “the McCarrick affair, the Pennsylvania grand jury nauseating report,” and “now all the tension with the Viganò letter.” He noted these crises have no doubt been the most difficult on abuse victims, who perhaps had “just begun to heal” from abuse years ago.

“What do you think when you hear these now-elderly people who’ve absorbed all this pain for so long, with impunity in your Church?” Amanpour asked Dolan after playing a clip of Pennsylvania abuse survivors speaking out.

“Thanks for asking. And you know what, I hate to say this: it’s not new to me,” said Dolan. “I’ve had to listen to people face-to-face, and if you don’t think that’s wrenching, I tell ya, it’s awful…this summer has been anything but a church picnic for us. I mean, it’s been a disaster. One crisis after another. And as I try my best to listen to people, I hear them express very eloquently frustration, bewilderment, anger, confusion – you name it, they got it. And you just asked me my sentiments – I say to them: thanks for telling me, nice to meet you, I’m feeling the same way. ‘Cause I get angry as well, that priests could do this, that brother bishops would be so negligent in not responding properly, that our people are suffering, and most of all – most of all – that these victims are [suffering].”

According to Dolan, his elderly mother doesn’t want to go to lunch with friends from her nursing home out of embarrassment.

The abuse crisis, particularly as it relates to the misdeeds of bishops, shows no signs of slowing down. Bishop Michael Bransfield of the Diocese of Wheeling-Charleston turned 75 just over a week ago, and Pope Francis accepted that resignation today as the Church launches a probe into whether Bransfield sexually harassed adults.

According to a diocesan spokesman, Bransfield has been instructed to live outside the Diocese of Wheeling-Charleston during the investigation and his whereabouts are currently unknown. Baltimore’s Archbishop William Lori has been appointed apostolic administrator of that diocese.

A local hospital ward and a Catholic school gymnasium are both named after Bransfield; it’s unclear whether they will be renamed. A Catholic high school named after Wuerl has already changed its name in the wake of the Pennsylvania grand jury report.

1
World Economic Forum adviser Yuval Harari is a Marxist who believes there is no truth, only power
2
Pope Francis says there are ‘insufficient elements’ to launch investigation into Cdl. Ouellet
3
Dr. Robert Malone: Endless mRNA jabs are in the works as the CDC and FDA play ‘hide the data’
4
Some medical professionals are claiming pro-life laws stop them from prescribing pain-killers. They don’t
5
Episcopal Church endorses sex changes for children ‘at all ages’
Subscribe to Daily Headlines »