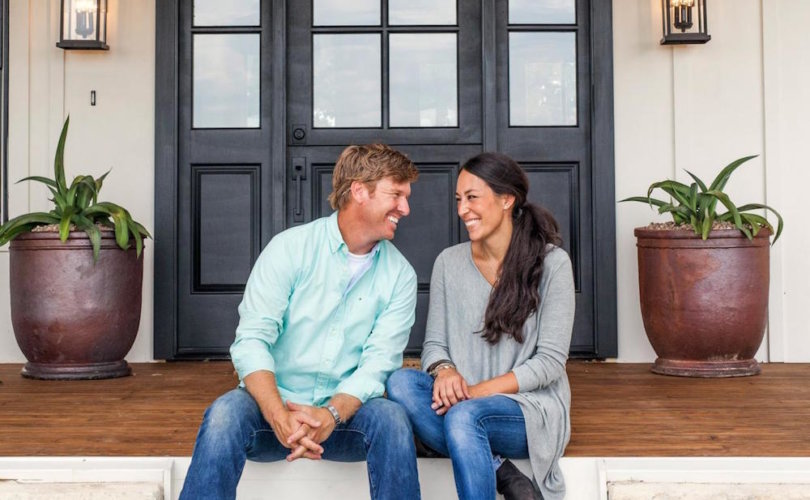 December 2, 2016 (LifeSiteNews) – HGTV has issued a statement affirming its commitment to the “LGBT community” after its stars Chip and Joanna Gaines came under fire from the left for attending a church that believes in man-woman marriage. Chip alluded to the situation on Twitter with a Bible verse about keeping the faith.

“We don’t discriminate against members of the LGBT community in any of our shows,” the network's statement said. “HGTV is proud to have a crystal clear, consistent record of including people from all walks of life in its series.”

On Thursday night, HGTV tweeted a graphic congratulating Chip and Joanna on their series' “record-breaking” season premiere. “We can't wait for the rest of the season!” it said.

The controversy began when a Buzzfeed piece “exposed” the Gaines' pastor for preaching a Biblical view on marriage and sexuality. The couple remained silent on the issue. The Buzzfeed piece questioned whether Chip and Joanna would serve a same-sex couple on their renovation and design show Fixer Upper.

Jason and David Benham, whose HGTV show was cancelled after leftists attacked their pro-life, pro-marriage views, called the campaign against Chip and Joanna a “witch hunt” and encouraged people to stand behind them. Chip and Joanna's pastor gave an interview to Fox News explaining he is “absolutely not” anti-gay, as the left claims, but rather “pro-helping people.”

Chip released a series of tweets suggesting “everything is going to be ok” and quoting a passage from Corinthians about remaining strong in faith.

Be on your guard; stand firm in the faith; be courageous; be strong. DO EVERYTHING IN LOVE.

(2)… and at least at that moment, at my house, all is right with the world!

U know.. even as all hell “appears” to be breaking loose. All I have to do is look at my 4 precious babies sleeping, or kiss Jo good morning

Morning counseling with the girls.. they seem to think everything is going to be ok. #farmLife pic.twitter.com/IOeY2iYFxP

Its by grace u have been saved, through faith, & this is not from yourselves, its the gift of God. Not by works, so that no one can boast

Commentator Dana Loesch speculated that Buzzfeed doesn't care whether HGTV “includes gays in their programming” because their real goal is to destroy the Gaines couple because they're Christians.

It doesn't matter to Buzzfeed if HGTV includes gays in their programming — Chip and Joanna Gaines are Christians who must be destroyed.

The millions of Americans who share the view of the Gaines' pastor will likely closely watch the situation to see whether HGTV's inclusion of “people from all walks of life in its series” continues to contain Christians.