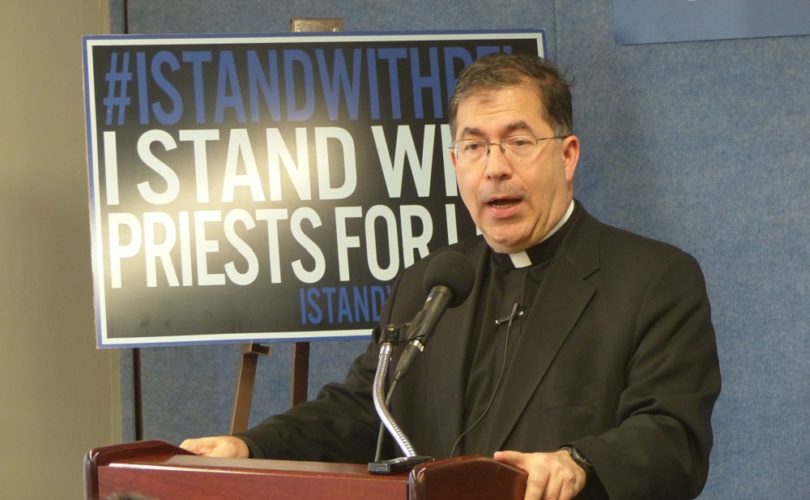 WASHINGTON, D.C., March 23, 2016 (LifeSiteNews) – As their case went before the U.S. Supreme Court, two of the dozens of plaintiffs who oppose the Obama administration's insurance mandate for abortifacients, contraceptives, and sterilization said the government has no case.

“This debate is not just about what women want, what women need. This is about the religious freedom of every American,” said Priests for Life National Director Father Frank Pavone.

In a presentation lasting nearly 20 minutes, Pavone argued that not only did the mandate fail on strictly legal grounds – he and his organization's attorney, Robert Muise, say it runs afoul of the 1993 Religious Freedom Restoration Act – but it is inconsistent in its application.

“One of the things we do in our ministry is to send our priests into the parishes … we'll offer Masses on the weekends, we'll do parish missions, we'll do other activities fostering the pro-life activity of those churches,” said Pavone.

“Those churches into which we send our priests are exempt from the mandate. We who send the priests there are not. We share the exact faith that these parish churches share, and we share the exact same objections to the mandate, but we don't share in the exemption from the mandate. Catholic faith, Catholic priests, Catholic objections, but the government is dividing us on the basis of … how we are classified under the tax code.”

Approximately one third of Americans are exempt from the mandate, including secular businesses like ExxonMobil and, according to Pavone, “many churches” that don't object to the mandate's requirements.

“If we have an adverse ruling in this case, it would be unprecedented,” continued the attorney. “I am aware of no other case in our history where the U.S. Supreme Court has permitted the government to decide for a religious adherent what does or does not violate that person's religious beliefs. And to have that power will undermine our religious freedoms.”

Muise said the burden of proof for the mandate is on the government, not on the groups that oppose it.

Many of the court rulings against Priests for Life, Thomas Aquinas College, Little Sisters of the Poor, and the other groups that oppose the mandate claim that the groups are not adding to any moral burden on insurance companies because the companies are already required to insure contraceptives, abortifacients, and sterilization under the mandate. They also claim that the religious groups are merely signing a piece of paper, not being active participants in the insurance process.

Asked about this argument by LifeSiteNews, Thomas Aquinas College general counsel John Masteller said that this argument holds no sway with his organization, which self-insures. “It's our money,” he said.

“When we send in the notice … we have designated our third-party administrator to carry out the objectionable coverage.”

“This would be beside the point,” Pavone added in response to LifeSiteNews's question. “The fact of the matter is, for us, is that it's in place. We still have to provide the legal authorization for our health insurer to cover our employees. … That's part of the equation. What we're saying is simple – anyone who has religious objections to the mandate should have a religious exemption from the mandate.”

According to Muise, the government “conceded” that the involvement of Priests for Life “is necessary for them to accomplish their objective.”

“This is clearly a case of material cooperation with evil.”