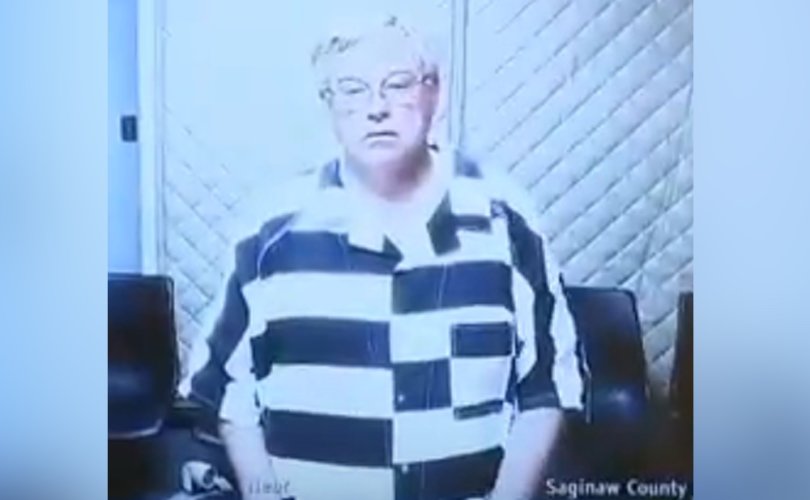 The priest, Father Robert DeLand, is the pastor of St. Agnes parish in the Catholic Diocese of Saginaw.

The police had been monitoring DeLand for months after a 17-year-old and his parents came to them with a complaint about DeLand’s alleged predatory behavior. The boy had been ordered by a court to do community service under DeLand.

The priest is also accused of giving alcohol to a minor and purchasing ecstasy, but hasn’t been charged. There were “several incidents and criminal complaints” leading up to the arrest, the Tittabawassee police department said.

Another alleged victim, also a male, was 21. The attacks on the two victims were almost “carbon [copies],” a law enforcement official said a press conference.

Since the police announced DeLand’s arrest, they have been “inundated by a number calls from individuals alleging similar acts over the last 30 years,” an officer said at the press conference.

The 17-year-old victim’s parents were concerned about “grooming techniques” DeLand was using, another official said at the press conference. In the late hours of Sunday and early hours of Monday, the 17-year-old victim helped police with an undercover operation which led to DeLand’s arrest.

The first alleged assault occurred on August 7, 2017. According to police, “A criminal sexual assault was filed by a subject alleging he was sexually assaulted…by a Catholic Priest at the priest’s condominium.”

They have executed several search warrants and seized items from DeLand’s residence, the rectory, and his church. Police said DeLand had last been at school events a week ago, during which they were monitoring him.

Priest was on the board of an anti-child abuse organization

“As a result of the arrest and criminal investigations the 71 year old Catholic Priest has been banned from the Freeland Community Schools, as well as the CAN Council Great Lakes Bay region properties, where he serves as a board member,” the police department said. “The suspect has been served written Criminal Trespass Warnings as well.”

The CAN Council Great Lakes Bay is an anti-child abuse organization. Its newsletters from January 2017 and January 2018 list DeLand as a donor.

“He was a board member for a very short period of time over this last year,” Suzanne Greenberg, President and CEO of the CAN Council, told LifeSiteNews. “And the board has taken action and he has been removed from the board. He only attended two board meetings and he has not ever been in interaction at all with children in his time here.”

“I’m incredibly inspired by the young man – who was 17 – who worked with the police to make the arrest possible,” she added.

Diocese: We learned about this from local media, had ‘no previous knowledge’

DeLand, a canon lawyer, was the Diocese of Saginaw’s judicial vicar. He sat on the marriage tribunal, which determines whether couples qualify for annulments.

“The Catholic Diocese of Saginaw first learned about the arrest of the Rev. Robert J. DeLand this morning from local media who received a news release overnight from Tittabawassee Township Police,” the diocese said in a statement posted on its website. “The Diocese of Saginaw had no previous knowledge of the police investigation or of these allegations. Upon receiving the information from media this morning, the diocese requested a copy of the police report and warrant issued against Father DeLand, which we have not yet received.”

Bishop Joseph Cistone of Saginaw said in the same statement, “I am deeply distressed by this most serious situation. Clearly, the diocese will cooperate fully with law enforcement and their investigation. I ask that you keep in your prayers Father DeLand and anyone who has brought forward allegations against him. My heartfelt prayers and support go out to the St. Agnes Parish family and the entire Freeland community.”

Fr. DeLand’s former job for the diocese: encouraging young men to be priests

In a 2010 interview with mlive.com, DeLand discussed his passion for community service (which, years later, is how he came in contact with the 17-year-old) and revealed he was the diocesan vocations director for five years. Vocations directors are in charge of recruiting and screening young men who are discerning the priesthood.

Representatives of the communications and formation offices of the Diocese of Saginaw did not respond to multiple requests for comment from LifeSiteNews.

The best part of his job, DeLand said in that 2010 interview, was the “parish and the family we create here. I love celebrating, especially the Eucharist, with folks. I really love our kids. I love the diversity of my work. I love going to the diocese, the diversity that calls me to.”

During that interview, he also said the person he’d most like to meet is the Dalai Lama because  “I think it would be a very fruitful dialogue for both of us. I would like to delve into his Eastern spirituality, but I would think my Christian spirituality would have some influence on his spirituality.”

Working at a “home for children in Saginaw…really solidified my call” to the priesthood, he said.

Fr. DeLand did not reply by press time to an emailed request for comment. His next court appearance is scheduled for March 12 before Judge David Hoffman.

He has been released on bond but is being monitored with a GPS tracker. Officials said DeLand asked the judge for the names of his accusers, which police think suggests he wants to contact them. Part of his bail conditions forbid any contact with the victims or anyone under 21.