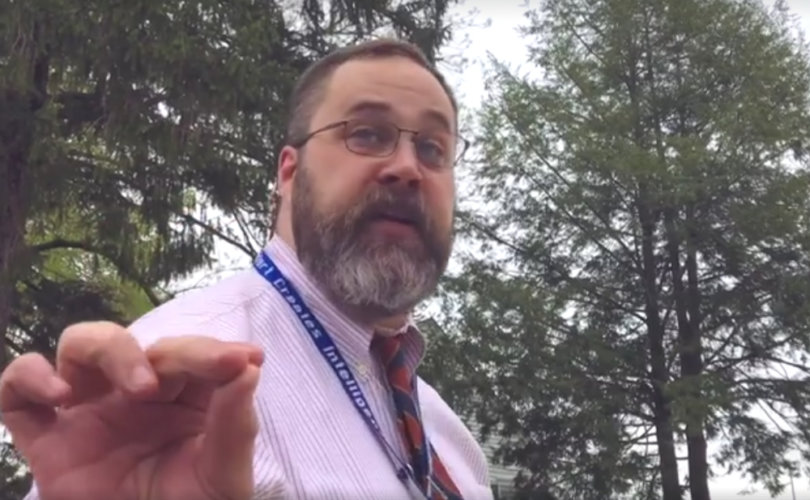 DOWNINGTOWN, Pennsylvania, May 16, 2017 (LifeSiteNews) — A school administrator who lashed out at pro-life teens has resigned over his actions.

Zachary Ruff became upset with two teens holding pro-life signs at the Downingtown STEM Academy on April 21 and tried to force them off a public sidewalk in front of the school.

The 40-year-old assistant principal and dean of academics and student life was recorded harassing 16-year-old Connor Haines and his sister Lauren, 19, on a cell phone camera and the school’s surveillance camera.

Ruff was put on administrative leave without pay after a May 5 school board hearing and he stepped down Thursday.

He had accused the teens during the confrontation of having a “twisted, perverted agenda” and told them, “You and Trump can go to Hell.”

When the Haines siblings, who were not students at the school, calmly pointed out that they had a right to stand on a public sidewalk, Ruff grew more agitated. He shouted, sang show tunes, and danced to draw attention away from the teens’ pro-life signs.

At one point, he both denied and affirmed the personhood of pre-born children.

To Ruff’s objection of a picture of an aborted baby, Connor replied, “These children are being murdered in our society.” Ruff angrily and repeatedly yelled, “They’re not children, they are cells.”

Moments later, Ruff told Connor, “You can go to hell, where they are, too.”

After the confrontation, Alliance Defending Freedom (ADF) sent a letter to STEM Academy on behalf of the two teens to demand an apology and a public acknowledgment that they had the right to be on the public sidewalk.

The school posted an apology on Facebook:  “His conduct does not represent the values of the school district. … We truly apologize to all for the actions of this employee.”

An acknowledgement of the right to demonstrate on public property came in a public statement from the district.

“Dr. Ruff has acknowledged that the demonstrators had a right to be on a public sidewalk,” the school said. “He acknowledged that his conduct cannot be defended or condoned and he deeply regretted his actions as displayed on the video. This school district will not interfere with the rights of anyone to express themselves.”

The ADF letter also requested an opportunity to address interested students after school.

Even some pro-abortion residents expressed support for the peaceful students.

“I personally am pro-choice, but what I really am pro-First Amendment,” one school board meeting attendee told CBS Philadelphia. “Those kids weren’t hurting anybody.”

Many STEM students backed Ruff and delivered a petition to the school board with 50,000 signatures in support of the history teacher and assistant principal. Zach Ng, a 15-year-old sophomore, described Ruff as “the heart and soul of our school.”

Lauren and Connor told Philly.com that they have been threatened online since the incident.

The Haines siblings were also falsely accused of banging on cars, but the school’s surveillance video proved they were nothing but peaceful.

The incident can be seen here and here.