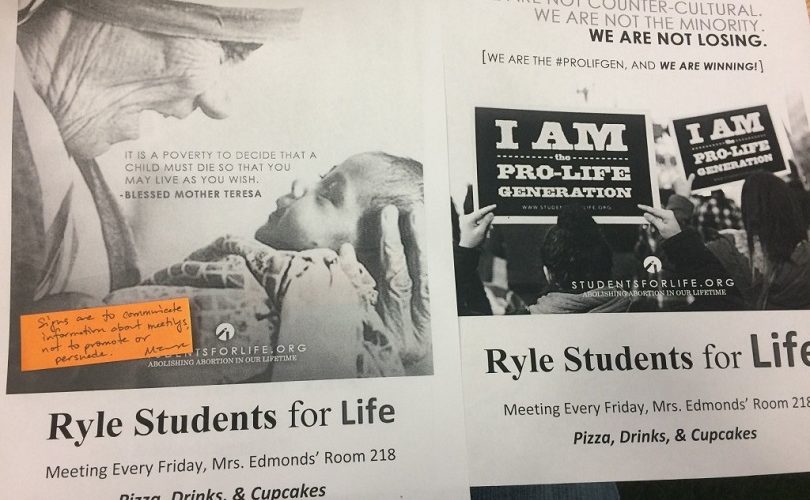 Larry A. Ryle High School Principal Matthew Turner told the school's Students for Life President Patrick Edwards, a senior at the high school, that their fliers were problematic and “too controversial” for school grounds.

One of the censored Students for Life America (SFLA) fliers featured a picture of Mother Teresa holding a baby, with her quotation, “It is a poverty to decide that a child must die so that you may live as you wish.”

Of seven fliers, the only one Principal Turner allowed freshmen to see was one of Anne Frank with the quote, “How wonderful is it that nobody need wait a single moment before starting to improve the world.”

Concerned that their basic rights were violated, Students for Life contacted an attorney, who wrote to Turner, demanding the school allow SFLA the right to express the students’ opinion.

The letter explains the school’s administration “banned Patrick’s expression solely upon its specific message and viewpoint.”

The SFLA letter says that “at the same time [Turner] chose to censor Students for Life…[he] allowed dozens of other student posters to be freely displayed in the high school.” The students ask an assurance from Turner by next Tuesday that Ryle Students for Life will be allowed to post their fliers.

National SFLA president Kristan Hawkins noted that the only reason the school censored the fliers was “because they promote the pro-life message.” She said the school's censorship “is outright discrimination.”

Edwards said other clubs were allowed to post fliers expressing various viewpoints, but “I was specifically told my fliers could not be posted because the issue was too controversial.”

“The school has no right to censor a message because they deem it to be controversial,” Hawkins said in comments made Tuesday.

Turner told WCPO-TV, “We believe that our school procedures are in full compliance with the law. We do not discriminate.”