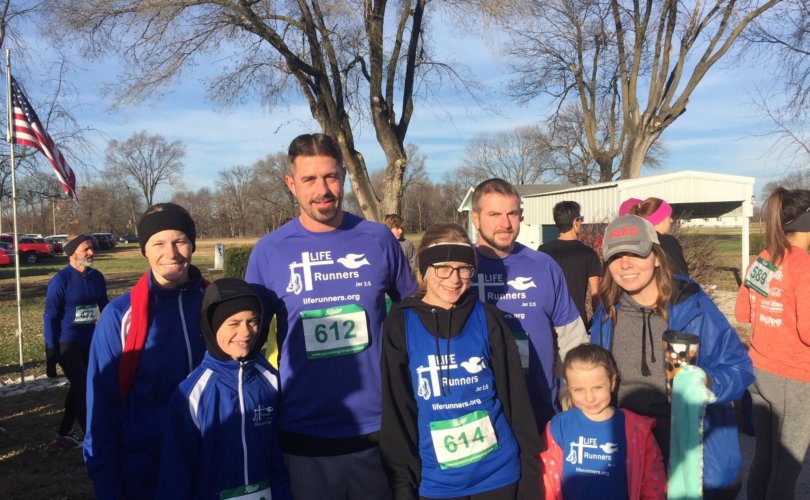 JEFFERSON CITY, Missouri (LifeSiteNews) – A high school football and wrestling coach is multiplying the impact of the pro-life message through his bold witness for the unborn at a public school.

Nathan Redcay, who is now in his 19th year teaching and coaching at Jefferson City High School, has helped inspire hundreds of students to join the school’s LIFE Runners chapter, largely through his own wearing of a “Remember the Unborn, Jer 1:5” jersey, which is the hallmark of chapter membership.

The goal of the jersey’s witness is to inspire others in turn to choose life for their unborn children.

From 2017, at least 217 Jefferson City High School students have been witness-bearers for the pro-life message, having signed up to don the “Remember the Unborn” jersey. Redcay explained that curiosity about the message on his own shirt is what propels many of the students to sign up for the pro-life chapter.

Redcay explained that when he wears the shirt, “mostly, people ask about it — ‘What’s this?’ Because there’s a Bible verse there. That’s when I get to tell them, and that’s when a lot of people sign up.”

Jeremiah 1:5 includes the Scripture, “Before I formed you in the womb, I knew you … ”

“It’s been a positive witness for them and it’s really helped us grow our LIFE Runners chapter quite a bit at Jefferson City High School,” the coach said.

Redcay noted that he has an expanded platform for witnessing since he not only teaches but coaches two different sports.

“That’s another avenue for witnessing, is where I’m just around a different set of students. They kind of look up to me, so it’s another way to witness, not just as a teacher, but also as a coach,” he shared.

Redcay told how, in accordance with the LIFE Runners program, the group witnesses the first Wednesday of each month, when “everybody wears their shirts, we take a big picture, do a prayer,” and recite the LIFE Runners creed.

The response to the witness, Redcay said, has been “mostly positive.”

“I think a lot of people appreciate the boldness,” said Redcay, explaining his drive to wear the shirt. “I just like to be a bold witness for Christ in everything that I do.”

In fact, as Pat Castle, founder of LIFE Runners and retired Air Force Lieutenant Colonel, explained to LifeSiteNews, Redcay’s commitment to wearing the jersey was particularly bold not long after Castle had launched a chapter at the school. About a year into the chapter, Castle explained that the school administration pushed back after complaints from faculty that they were “proselytizing.”

“So now I’m taking all this flak. I went to Nathan and said, ‘Buddy, it’s only a matter of time, they’re gonna be coming for you … He said, ‘I’m not taking it off. He boldly continued,’” Castle shared.

Castle told LifeSiteNews that for his powerful witness, Redcay has been honored as the “2021 LIFE Runner Man of the year of about 18,000 LIFE Runners,” adding, “It’s well deserved.”

Castle has previously explained to LifeSiteNews the power of wearing LIFE Runners’ “Remember the Unborn” jersey with a staggering statistic, and stories to back it up.

A study by Students for Life found that “78% of post-abortion women said if just one person had offered support or if they viewed a supportive sign, they would have chosen life,” Castle said.

As an example of this simple but powerful “sign” phenomenon, Castle shared the story of a woman who told him that she had visited the Hard Rock Cafe while in a crisis pregnancy in her early 20s.

“I was like, Lord, if you want me to not have this abortion, I need a sign, I need encouragement,” she told Castle. While at the Hard Rock, she noticed a mural on a back wall that said, “The birth of rock and roll” — and the sun was highlighting only the word “birth.” That was all it took to save her baby, she told Castle.