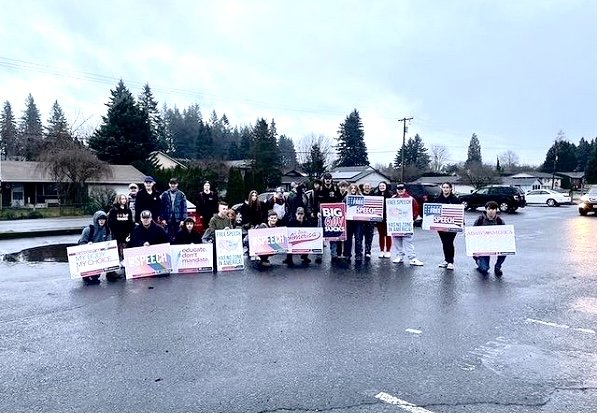 WASHOUGAL, Washington (LifeSiteNews) — A group of high school students are protesting Washington state’s mask mandates by refusing to wear masks in the hopes of jump-starting a statewide movement that will prompt a reversal of the mandate.

Cade Costales, a senior at Washougal High School and leader of the “Freedom Fighters” protest group, has been widely praised for a viral speech to his fellow classmates in which he urges them to remain respectful while explaining the ultimate goal of the protests.

“This is not an excuse for any of you freshmen and sophomores to disrespect your teachers. If I hear of anybody disrespecting teachers or staff tomorrow, that makes us look bad. We want this to be a peaceful movement. We are just trying to gain back our rights as citizens,” Costales told his classmates at Fishback Stadium on Monday, January 31.

Monday’s walkout was planned together with school principal Sheree Clark to coordinate with similar events around the state of Washington, according to the Camas-Washougal Post-Record.

lark said she was first alerted to the protest plans when some students showed her social media posts from classmates announcing their intention to enter the high school maskless.

“As you can imagine, some of them were concerned about that,” Clark told the Post-Record. “Within 30 minutes of receiving the first report, I was able to talk with the student who was organizing (the protest) and get a plan in place.”

Clark said she gave the school staff “talking points” and let the students’ families know “what was going on,” adding, “It went very smoothly.”

The Post-Record pointed out that the “Washington State Department of Health requires all school personnel, volunteers, visitors and students to wear face coverings over their noses and mouths while inside school buildings and on school buses, regardless of vaccination status.”

Clark said she made clear to the student protesters that the school did not initiate the mandate and that they understand the students’ desire to change it, but also that “if students are in buildings, they have to wear their masks.”

“We told them that as long as they respected the decision, (they would face) no discipline or anything like that,” she said. “The only discipline that would have occurred is if we had students in the building refusing to put their mask on and defiant behavior around that, and we did not have that at all.”

Monday’s protest at Fishback Stadium, which drew about 100 students, was “very peaceful and respectful,” according to Clark. “They decided they wanted to go ahead and protest on Tuesday and, again, we fully supported their right to do so.”

On Tuesday, February 1, students showed up at school without masks and were turned away by staff, as video footage posted to the group’s Instagram page shows.

“Take a mask, if you don’t take a mask, you gotta head back out,” a school staff member can be heard saying in a posted video from Tuesday.

Costales commented Wednesday that protest turnout was “amazing,” but that they were missing 20 to 40 people “due to threats of suspensions for athletes from the administration.”

Remarkably, the principal’s overall reaction to the mask protests has been one of glowing praise.

“They were very, very respectful,” Clark told the Post-Record. “They were exemplary in the way that they approached this protest. I can’t reiterate how proud I am of our students who are peacefully demonstrating. They’ve been fantastic.”

Many commentators have praised Costales’ show of leadership, including Joe Kent, a Republican, Trump-backed candidate for Washington’s third congressional district. He tweeted Feb. 2, “Great leadership by this young man. Massive, peaceful, non-compliance is how we win. Great work, Washougal High. Time for the teachers and administrators (to) follow their lead.”

Costales explained to Fox News host Jesse Watters on Friday that he and the other leaders of his school’s mask protest movement felt “convicted” that requiring the students to wear masks was against their “freedom of choice.”

While no suspensions or expulsions have yet taken place because of the walkouts, Costales said athletes have been warned that “if they participate in the protests, it could potentially hurt their season.”

He also said parents have generally been “super supportive.” Costales said they plan on holding another protest next week, growing their platform and spreading their message far and wide.

Commenting on the student protests, former Hawaii Congresswoman Tulsi Gabbard remarked to Watters that she believes they are a natural reaction to “government-mandated conformity” and based on decisions that are “really more about control and conformity than they are being driven by health interests and by science.”

A number of experts and studies have suggested that wearing a mask is not only inefficient at slowing the spread of COVID-19 but could also have harmful effects on people’s physical and mental health, particularly children.

Similar mask protests by students have recently cropped up across the country. In Oakdale, California, hundreds of high school students are refusing to wear masks as part of a protest campaign called “Let Them Breathe.” The Daily Wire reported that “on Wednesday alone, 375 Oakdale Joint Unified school district students refused to wear masks,” while parents joined in protest outside schools.

1
Former NFL linebacker dies suddenly at 25, no cause of death given
2
How the US gov’t built a shadow structure that enabled COVID vax ‘bioterrorism’
3
Fr. Gerald Murray slams Pope Francis’ comments on homosexuality, African bishops
4
The real reason why liberal bishops are trying to shut down the Latin Mass
5
Catholic school board suspends student who opposed boys in girls’ bathrooms for the rest of the year
Subscribe to Daily Headlines »