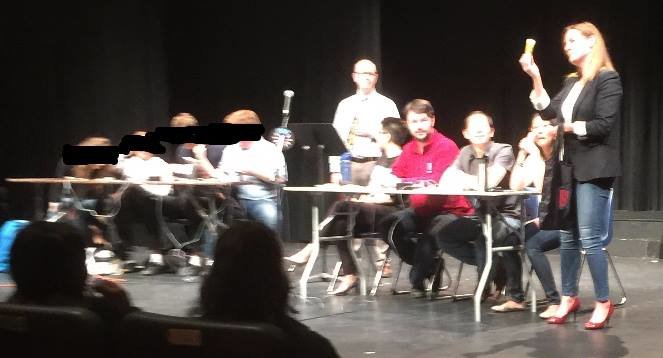 An organizer thanks the teachers who participated by giving them each a bottle of sex lubricant.Kari Simpson, Culture Guard

Simpson, who attended the event and recorded it on her phone, said an unnamed woman wearing tight jeans and red stiletto heeled shoes introduced the annual sex show, telling the students that being teenage “sex addicts” always gives them an advantage over the teachers.

“Grade 12 will always have the advantage,” the woman said, “since it seems you have more sex addicts than anyone else in the school.”

Some of the questions asked of the girls, boys, and teachers during the event included the following:

“These are the tactics used by the 'Sex at Lunch' teachers,” she said.

Simpson said she became especially concerned when the school's geography teacher Sean Nugent warned the students not to take photos or write about the event on social media.

Simpson told LifeSiteNews that parents should see the event as “deeply troubling,” not only because of its explicit sexual content, but also because of the way school staff deliberately told students to keep the event under wraps.

“Parents should be righteously angry,” she said. “The 'state' via the school system is systematically undermining parents' authority in their child's life by secretly indoctrinating them into its own sexual values, morals, and beliefs.”

Simpson said pushing an explicit sexual agenda on children in school that undermines “responsibility, modesty, and self-control” — virtues that every parent wants for their children — is not unlike what happened in the residential schools. In residential schools, the state via educations institutions attempted to eradicate from children the values of their own indigenous cultures.

“This 'Sex at Lunch' event was simply a perverted sex show designed to alter the values and sexual morals of children,” she said. “This is a dangerous agenda and parents can only stop it by uniting against it,” she added.

After Simpson wrote about the event on her website, she was threatened with prosecution by legal firm Harris and Company for recording the event and publishing a photograph of it. The firm is acting for the Board of Education District 39 (Vancouver).

But Simpson said she will not comply with the request to remove the photo from her social media accounts and destroy her recording of the 'Sex at Lunch' event.

“You are incorrect to think I will remove them, will refrain from adding more or will limit distribution,” she wrote in her response to the threat that she published on her website.

“You will note that, unlike the teachers and administrators, I have protected the identity of the children; I will not exploit them. But the so-called “teachers” and other facilitators to this obscene production will be exposed. Parents have a right to know whether they can trust their children’s’ teachers, vice principals, superintendents, and trustees,” she added.

Simpson has recently created an organization to unite parents called Parents United Canada (PUC). She formed it for the purpose of “protecting parental rights in all the provinces.”

“Together we are the voice that matters,” she said.