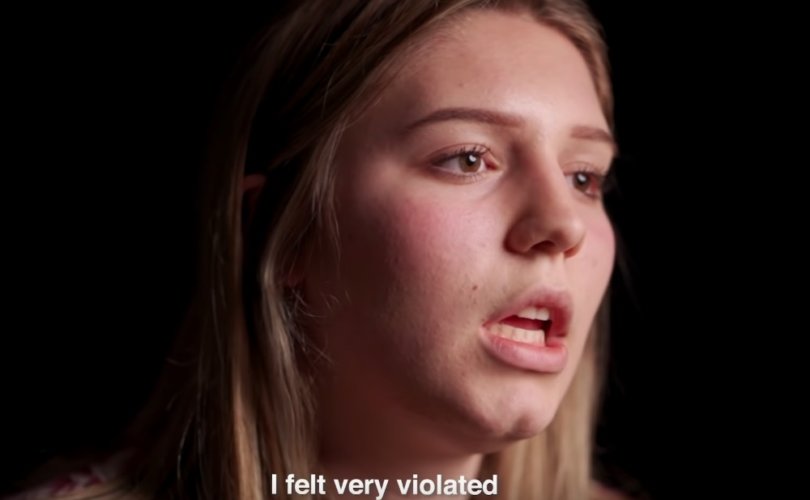 On March 14, the Law Office of Andrew H. Shaw filed a complaint with the U.S. Department of Education's Civil Rights Division regarding Honesdale High School’s handling of a complaint by a 15-year-old sophomore.

“It was the second week of school, it was first period, and I had gym class,” the unidentified girl explains in a video released by the law firm. “And I walked in with all my friends, and while I was putting on my pants I heard a man's voice. So I turned around and he's standing there on the opposite aisle looking at me. I glanced down and I could tell that he was wearing women's underwear and what was underneath it.

“When I knew that a man was looking at me I felt very violated and very scared, especially looking at me while I'm getting dressed,” she says.

“Upon talking to both Superintendent [Gregory] Frigoletto and Honesdale High School’s principal, Chris Pietrazewski, [the student’s] parents were told that the school would not remove the male student from the girls’ locker room,” the complaint details. The officials didn’t reference a specific policy change on the subject but claimed they were acting on the advice of their legal counsel.

The school then “informed the male student that he could continue to use the girls’ locker room, but asked if he was comfortable changing behind a shower curtain,” then told the girl she could either wait for him to leave the locker room before changing or change in a single-use area near the nurse’s office.

“Therefore, if [the student] did not want to remove her clothing in front of a male student, she had to a) risk being late to gym class, and b) risk being late to her next class,” the complaint observes. “To make matters worse, this ‘accommodation’ made it abundantly clear that [the student] has made complaints about the presence of the male student, which adds to the tension.”

“Like most forms of sexual harassment, the girls in this school have little power over their situation,” she continues. “The school’s offered solution made it clear that they believed that my client was the problem.”

Frigoletto told ABC affiliate WNEP he was unable to comment on the situation beyond claiming that the district was following a recent judicial ruling on the subject (presumably referring to the unanimous May 2018 ruling by a three-judge panel of the 3rd Circuit Court of Appeals, which the religious liberty firm Alliance Defending Freedom has appealed to the U.S. Supreme Court).

Critics of “transgender” bathrooms and locker rooms argue that forcing children to share intimate facilities with members of the opposite sex not only violates their privacy but creates opportunities for sexual assault, as happened to a five-year-old girl in Georgia in 2017. Yet The Blaze observes that the Honesdale student’s stand has been met with invective from various observers on social media.

“Maybe the girl should take a course in how to be tolerant of others who are different,” one critic argued. “WTF is she doing checking out other people's genitals?” another asked. A third claimed that simply referring to the male student as a “man” was “scary” and constituted “hate” coming “from her parents.”

The girl’s parents say they simply want to protect their daughter, however. “I think any father wouldn't want their child to be exposed to anything, especially at such a young age,” her father says in the video. “ Her mother adds that “my daughter does not consent to being seen by or to see someone of the opposite sex in her locker room.”