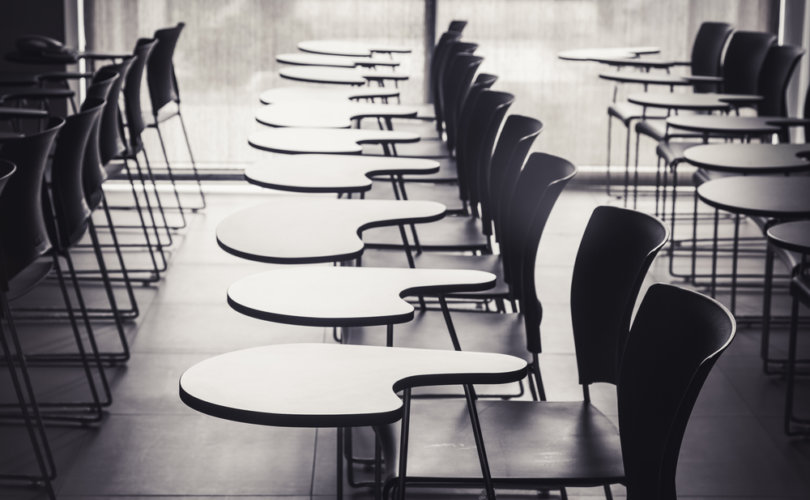 Update: Mr. Vlaming has been fired from his job. For full details, read our latest report here.

WEST POINT, Virginia, December 6, 2018 (LifeSiteNews) – A high school teacher in the Virginia town of West Point has been placed on paid administrative leave for refusing to refer to a gender-confused student by “trans” pronouns, but other students have rallied in support of him.

Peter Vlaming is a French teacher at West Point High School who found himself in hot water for referring to a female student who considers herself male as “she,” WRIC reports. He says he agreed to honor her masculine name and avoid applying female pronouns to her, but draws the line at using inaccurate male pronouns. That isn’t enough for the powers that be, however.

“Administration is requiring that I use masculine pronouns in any and every context at school,” he said. “I was informed that any further instances of using female pronouns would be grounds for termination.”

The school confirmed it has placed Vlaming on paid administrative leave and will hold a public hearing this afternoon at his request. It claims it “has followed and will continue to follow Virginia Code and all local policies and procedures relating to licensed staff members,” but declined to give further specifics, citing “employee and student confidentiality.”

“Details regarding our recommendations will become public at that hearing,” the statement added.

“I'm just outraged about it,” Forrest Rohde, a junior at the school, told local media. “He's a really nice guy, he wanted to do everything about his students. He really does care about his students. The thing he will not do is change his ways of thoughts and believing in things just to conform to someone else's ideologies.”

“The transgender girl has the right to be whatever she wants but just because she has the right doesn't mean we're…obliged to follow her beliefs,” Rohde continued. The junior is so passionate about Vlaming’s plight that he’s posted signs around the school with messages like “Justice for Vlaming,” “Mr. Vlaming is innocent,” and “Facts don’t care about your feelings,” the catchphrase of conservative pundit Ben Shapiro.

“I see this stuff on the news far away from here,” he explained, “but when it hits close to home and someone's free speech is being violated, I have to step in and say something about it.”

As of the time of this writing, a petition calling for the school district to let Vlaming keep his job has obtained 1,619 out of 2,000 signatures.

“The student's parent complained to the principal and Mr. Vlaming was asked to sign a paper stating he wouldn't refer to the student as a female,” the petition says. “He stated he couldn't promise that he wouldn't ‘slip up’ again because for the previous 2 school years the student identified as a female, still looks like a female and he's not [used] to the student as a male. Therefore Mr. Vlaming was suspended and has since received a letter of termination.”

“Mr. Vlaming doesn't want any attention drawn to the student during this process because he doesn't want the student to get hurt,” the petition added. “HE WANTS TO FOCUS ON THE ADMINISTRATION'S REQUIREMENTS.”

The Christian Post notes that this isn’t the first case of its kind to arise recently; Shawnee State University philosophy professor Nicolas Meriwether in Ohio is taking his superiors to court for threatening to punish him because he refused to indulge a gender-confused student’s pronoun request.

At Chasco Middle School in Florida, gender ideology is so dominant that a male gym teacher was recently punished for not wanting to watch a female student who “identifies” as a boy undress in a locker room.