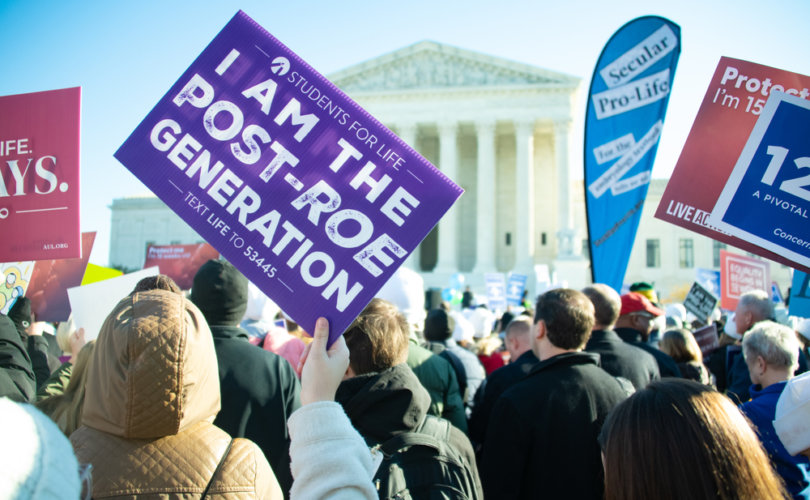 Pro-lifers rally outside the Supreme Court in Washington, D.C. on December 1.Shutterstock

NOBLESVILLE, Indiana (LifeSiteNews) — An Indiana high school student was granted permission to operate her Students for Life club on campus after school officials reportedly used bullying tactics to block her from running the group last year.

The student’s attorney along with Students for Life of America President Kristan Hawkins announced last week that the school reached a “partial agreement” with the student, permitting her to relaunch the club after she filed a lawsuit alleging school officials violated her constitutional rights.

“At Students for Life of America, we’ve seen how personal engagement with loving, pro-life friends saves lives, and we are proud to fight for our student’s right to have a voice in her school,” Hawkins said.

While the student will now be permitted to run her pro-life club, the legal action against the school is not over.

After 7 long months of fighting with administration, this pro-life student is finally able to start a Students for Life group at her high school – but things aren’t over yet 😬https://t.co/dvtkdAPeOa pic.twitter.com/H7svwciulR

The news comes after the student, a freshman at Noblesville High School, was originally given permission to kick off the “Noblesville Students for Life” (NSFL) club in August 2021, after which she quickly recruited 34 members.

Permission for the club was revoked, however, when the minor student (known as E.D. in the lawsuit) sought approval to distribute a flyer with an image of young people standing in front of the U.S. Supreme Court and holding pro-life signs, including “We are the pro-life generation” and “Defund Planned Parenthood.”

The complaint, filed December 21, alleges that the school district violated the freshman’s rights to freedom of speech, association and due process as protected under the First and 14th Amendments, and further contended that the actions of the school district and its representatives amounted to “libel, slander, and bullying.”

LifeSiteNews previously reported that less than two weeks after her permission to operate the pro-life club was revoked, E.D. was pulled out of class by Dean of Students Jeremy Luna, who allegedly demanded an immediate meeting without explaining why.

When E.D. requested to schedule the meeting for later, Luna refused, spoke with a raised voice, stood uncomfortably close to the girl, and demanded to inspect her phone after bringing in assistant principal Janae Mobley.

The lawsuit alleges that Luna, whom students have described as aggressive and intimidating, targeted and bullied E.D. The pro-life teenager reportedly left the meeting with Luna and Mobley shaking and in tears.

In November, a letter written by E.D. to a councilman was published without consent to two Facebook pages, leading to disparaging comments directed at E.D. that received the approval of several Noblesville School District teachers, who have since been named in the lawsuit.

The following month, E.D.’s pastor, Micah Beckwith, weighed in with an op-ed supporting E.D. and her pro-life and conservative advocacy.

When the newspaper allowed Noblesville High School principal Craig McCaffrey to respond, he asserted that E.D.’s club was shut down because of “multiple instances of disregard for school protocols,” but said he was working with her “to ensure compliance” and expected the pro-life club “to be reactivated soon.”

In response to McCaffrey’s article, Hawkins accused the principal of “using media to attack a pro-life girl.”

“Is this a pattern of behavior for Noblesville school officials, using the press to attack community members who share a different point of view?” she asked rhetorically.

Students for Life of America suggested that the school singled out E.D. and her pro-life advocacy group, treating it differently than other student clubs that also aren’t directly related to educational goals.

E.D.’s lawyers have argued “the school has an unwritten policy that gives its officials ‘unbridled discretion’ over which clubs and school organizations get approved,” The Indianapolis Star reported.

“Defendants have used this vague policy to bar plaintiff E.D. from creating a pro-life student group,” the complaint states.

In an article Wednesday, Kristi Hamrick of Students for Life of America pointed out that many other clubs have been allowed to operate on campus without facing issues from school administrators.

Clubs that have been permitted by the high school include “Young Democrats, Police Explorers, Black Student Union, Gender and Sexual Alliance, Conservation club, a ‘Comedy Sports Club’” and “a ‘Dungeons and Dragons’ group.”

Meanwhile, Hawkins argued that school officials deliberately attempted to intimidate E.D. in a bid to squash the pro-life club.

“The degree to which adults in authority attempted to intimidate a high school freshman is astonishing,” Hawkins said in a press release in December. “Noblesville High School officials went all out to ensure that a minor girl could not speak in their presence about her love for mothers and their children, born and preborn, and that she would keep quiet at school.”

1
Tucker Carlson: Biden admin ‘may have blown up’ gas pipelines in Baltic Sea
2
Here’s how to stop Google from collecting huge amounts of your data
3
The simple reason why you should stop using Gmail
4
Prophecy: War will break out in Europe after Pope visits Moscow
5
UFO and alien deception: a diabolical preparation for the Antichrist
Subscribe to Daily Headlines »