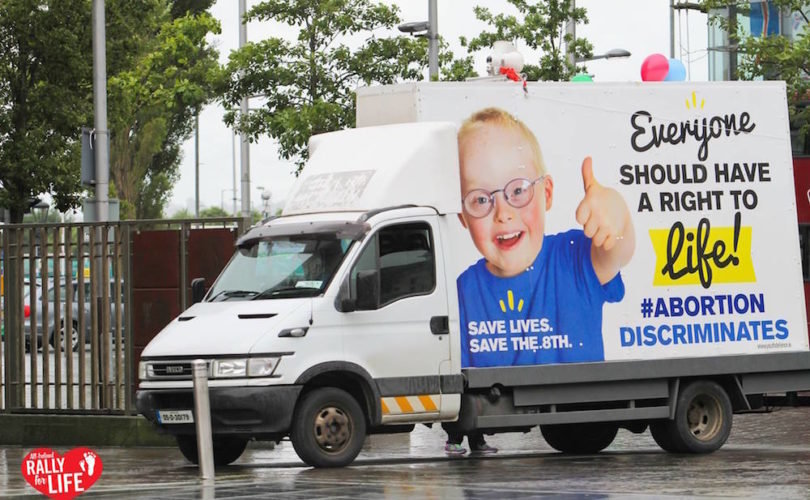 Courtesy of All-Ireland Rally for Life

IRELAND, May 25, 2018 (LifeSiteNews) – The Irish people are voting today on whether to keep or repeal their constitutional protection for preborn children, and turnout already indicates the depth of the country’s interest in the outcome.

The referendum concerns the 8th Amendment, which guarantees equal protection to preborn children and their mothers. As of 4:30 PM local time, Dublin county is reporting turnout as high as 40 percent in some areas, The Irish Times reports.

The polls opened at 7:30AM, and will close at 10PM local time. 3.3 million Irish citizens are registered to vote in the country’s 6,500 polling stations, with more than 100,000 new voters registered this year in anticipation of the referendum. Many Irish residents living abroad have flown home to vote on both sides.

Voting took place yesterday for 12 offshore communities, to ensure their votes could be counted in a timely fashion. Galway’s islands, Inis Meáin, Inis Oírr, and Inis Mór only saw between 45 and 50 percent turnout, while 75 percent of Inishbofin’s 200-person population voted.

Dublin’s turnout so far exceeds that of the 2016 general election and the 2015 referendum that approved same-sex “marriage.”

Some analysts say higher turnout, especially in the urban areas where many of the new voters reside, is an encouraging sign for repeal advocates, although others stress not to make any firm predictions from close polls that have been steadily tightening in pro-life campaigners’ favor.

“It won't be anything like the 65 percent of marriage equality,” Trinity College Dublin political science professor Gail McElroy told Newsweek. “In Ireland, there is something in the Irish psyche about abortion and represents that kind of religiosity and cultural historical influence of the Irish Catholic Church.”

Other suggest that the depth of support for keeping the 8th Amendment isn’t fully visible, because of media and cultural pressure to vote Yes. “So many no voters are shy,” Dublin resident Fidelma, who kept her pro-life stance private until today, told The Guardian.

In hopes of repeating the successful redefining of marriage, pro-abortion campaigners are placing special emphasis on Roscommon, Ireland’s only county to vote against the marriage referendum. But residents hope the strong turnout will yield a conservative outcome again.

“I voted no because it is murder,” Pastor Stephen Finley said. “I am fasting and I am praying all day for the right result.”

Many pro-lifers have warned that the government’s plan to legalize elective first-trimester abortions and “medical” late-term abortions would unleash a wave of abortions targeting children for conditions such as Down syndrome and cleft palates. Others have argued that legitimizing abortion would fundamentally change Ireland’s character and betray her heritage.

“To vote a repeal of the 8th Amendment of the Irish Constitution is to tell the world that we of Irish blood are really no different from all those who have persecuted the Irish people throughout the history of our country,” Pro-Life Massachusetts director R.T. Neary, an Irish American, writes. “To vote to repeal the 8th would be to forget our own history of being a people who were targeted by those who thought of us as less deserving of life and protection.”