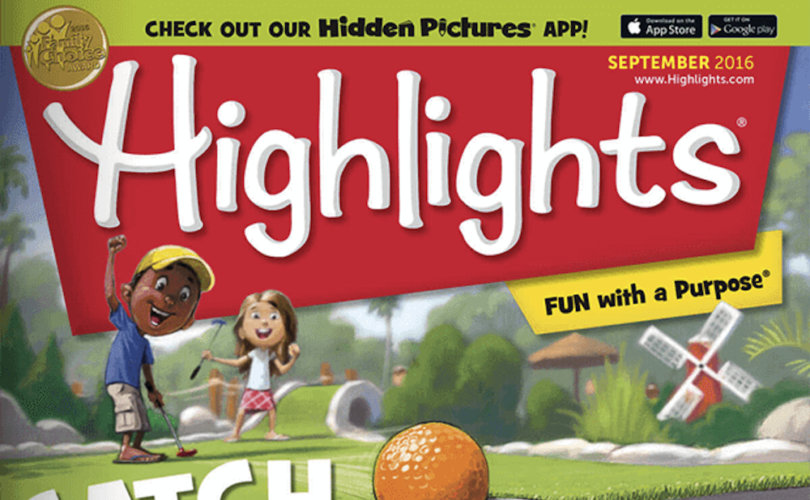 COLUMBUS, Ohio, October 26, 2016 (LifeSiteNews) — Highlights for Children is popular among preschoolers and schoolkids and a fun way to learn to read, but the magazine recently became embroiled in a controversy over gay inclusion.

A girl identified as “Kristina” wrote to the magazine's editors, asking that families with homosexual partners be depicted positively and regularly. Highlights for Children responded by writing that the magazine's editors had thought a lot about introducing homosexual families into their publications but hesitated in order to give parents the right to introduce the topic on their own terms.

In a written response to Kristina, Highlights for Children's editors stated, “We understand your wish to see your family's situation represented in Highlights.” After explaining their concern that parents introduce such “new” topics, the editors “assure” her, “It is very important to us that every child see his or her 'face' in the pages of our magazine at some point. … We will continue to think deeply about inclusion.”

Gay activists proceeded to condemn Highlights for Children, whose publications include Hello for ages 0-2, High Five for ages 2-6 and Highlights for ages 6-12. The publisher then backed off and issued an apology to Kristina and other LGBTQ protesters.

“In our initial response, our words weren’t reflective of our values, intentions or our position, and we apologize,” the editors wrote.  “We want to assure you that we have read every message and are listening carefully.”

The editors then went further to assure readers of their belief in the legitimacy of homosexual “families,” stating that “all families matter,” and “there are many ways to build a family,” and committing to “inclusion” in future issues.

“If ‘we believe that parents know best' isn’t expressive of the values of the magazine’s editors, there’s only one place it can go,” Rod Dreher of the American Conservative commented. “And so, goodbye Highlights for Children, another innocent victim of the PC mob.”

“It is insane that even Highlights for Children gets bullied into this, and that the editors would capitulate so quickly,” the columnist wrote.

Dreher predicted, “Within a year or two, Highlights is going to face enormous pressure to, um, highlight transgendered tots. Do you doubt it?”

Dreher then noted that 16 years ago a Gay, Lesbian and Straight Education Network (GLSEN) conference backed by the state of Massachusetts and its largest teachers union, which sought to eradicate the “hetero-centric culture that still prevails in our schools.”

The GLSEN conference taught about early childhood teachers “coming out” as homosexual to the youngest of students, including homosexuality in middle school curriculum, incorporating sexuality in world history classes, and integrating gay, lesbian, bisexual, and transgender education in early elementary school.

When tape recordings of the conference were offered to state legislators, GLSEN threatened to sue.

Dreher cites Anthony Esolen’s Out of the Ashes, Philadelphia Archbishop Charles Chaput’s Stranger In A Strange Land, and Dreher’s own new book, The Benedict Option, all of which sound the same proverbial call to arms for Christians to resist compromise with the world.

The time has come, Dreher advises, when “you just have to quit caring what others think, and do what you know is right, regardless of the consequences.”