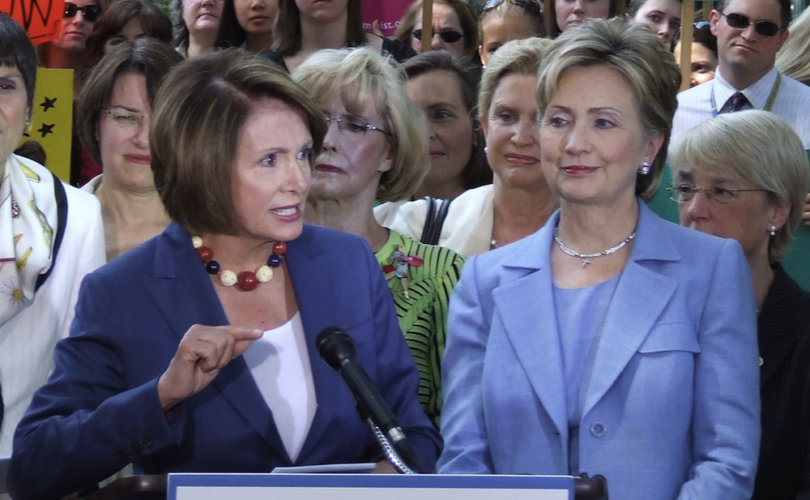 In interviews this week, former Democratic presidential candidate Hillary Clinton blamed the FBI for her loss in November and repeated the well-worn, disputed notion of Russian election interference. House Minority Leader Nancy Pelosi hung the Democrats’ defeat on “evangelicals and the Catholics” who are “anti-marriage equality and anti-choice.”

The former Secretary of State and New York senator conceded an imperfect campaign, according to CNN, but expressed belief that she lost “because of “intervening events in the last 10 days” of the election.”

“ … I was on the way to winning until a combination of Jim Comey’s letter on Oct. 28 and Russian WikiLeaks raised doubts in the minds of people who were inclined to vote for me but got scared off,” she told the network’s Christiane Amanpour. “If the election had been on Oct. 27, I would be your president.”

Pelosi tried to play down DNC Chair Tom Perez’s recent statement that abortion was “not negotiable” for Democratic candidates to earn party backing. She vowed that members of the party could be pro-life, but expressed doubt they would be successful.

“This is the Democratic Party,” Pelosi told Washington Post reporters Tuesday. “This is not a rubber-stamp party.”

The California Congresswoman proceeded with an account of her “staunchly Democratic” upbringing that included elements of devout Catholicism.

“Most of those people — my family, extended family — are not pro-choice,” she stated. “You think I’m kicking them out of the Democratic Party?”

Her comments to NBC’s Chuck Todd last month were a precursor to her saying Tuesday that values are what unites Democrats. But she tied this to working families – not abortion.

In Tuesday’s interview, she attempted at one point to paint abortion in a different light.

“It’s kind of fading as an issue,” Pelosi told The Washington Post. “It really is.”

This conflicted, though, with her telling the Post that Democrats’ stance on social issues cost them the presidency.

“You know what?” queried Pelosi. “That’s why Donald Trump is president of the United States — the evangelicals and the Catholics, anti-marriage equality, anti-choice. That’s how he got to be president. Everything was trumped, literally and figuratively by that.”

The Democratic Party’s platform made controversial waves for its lurch toward the extreme on abortion even before its establishment at the Democratic National Convention last July.

The party would go “further than previous Democratic platforms” on abortion, a Live Action report said of an early platform draft at the time.

The “rare” component from the previous “safe, legal and rare” mantra was abandoned even before the 2016 platform. But the Party sought to overturn the Hyde Amendment in 2016 and pledged to protect government funding for Planned Parenthood.

And the party called for the first time as well for taxpayer funding for abortion overseas.

The public outcry from the party’s abortion plank last July was significant.

It prompted SBA List President Marjorie Dannenfelser to point out in a TIME opinion piece then that “the Democratic Party is more extreme on abortion than ever.”

“No” came from both sides of the aisle

But voices other than those typically viewed as conservative criticized the extreme platform.

“It's something that I know most of the Democrats in West Virginia and most West Virginians would not agree with,” Manchin told The Weekly Standard last July. “I don't either.”

Democrats for Life Executive Director Kristen Day opined in the LA Times after the platform was adopted along with Fordham University theological and social ethics professor Charles Camosy how the abortion plank “betrays millions of party faithful.”

Even the dissenting National Catholic Reporter ran an op-ed critical of the abortion plank from Catholic Democrats President Steven Krueger.

Krueger, a self-professed “progressive Catholic,” wrote that “it was disheartening” to him “as both a Catholic and a Democrat to see the abortion plank” in the platform.

Krueger continued, “A recent Marist Poll, which found that 68 percent of U.S adults oppose the use of tax dollars for abortion, strongly suggests the plank runs counter to the will of the American people.”

We’ll keep our abortion, thank you

Still, Clinton had said the 2016 election was a referendum on abortion and promised to enact the greatest expansion of abortion funding in history. She also said during the campaign that the unborn had no Constitutional rights and stated previously that religious beliefs on abortion have to be changed.

And Pelosi expressed doubt to Post reporters Tuesday whether a firmly pro-life candidate could win a Democratic presidential primary.

She said the abortion debate was no longer about whether a candidate supports access to abortion but rather whether and how limits should be enacted.

“Within the Democrats, I don’t think that you’ll see too many candidates going out there and saying, ‘I’m running as a pro-life candidate,’” she said. “It’s how far are you willing to go on the issue — but let’s not spend too much time” on the issue.