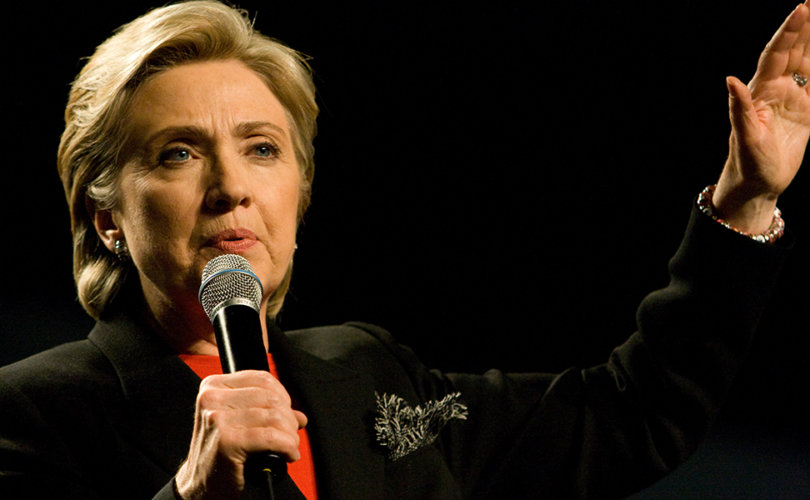 COPENHAGEN, Denmark, May 25, 2016 (LifeSiteNews) – Hillary Clinton lobbied internationally for abortion once again last week, telling a women’s gathering in Denmark that “reproductive rights” should take precedence in the controversial United Nations plan to end poverty and preserve the environment over the next 15 years.

“Gender equality, including sexual and reproductive health and rights, must be a core priority,” Clinton said.

The former U.S. Secretary of State gave a video address to the Women Deliver 4th Global Conference, “the world's largest global conference on the health, rights, and well being of girls and women in the last decade,” according to the event website.

The focus of the Copenhagen Women Deliver conference was implementation of the UN’s Sustainable Development Goals (SDGs) related to women in several areas, in particular “maternal, sexual, and reproductive health and rights.”

The event was billed as the first major conference of its kind since last year’s launch of the SDGs, which have been criticized by pro-life advocates for their promotion of abortion and population control. The stated goals on health and gender equality include the promotion of “universal access to sexual and reproductive health and reproductive rights.”

“This is an important moment as we chart a course to meet the new Sustainable Development Goals,” Clinton stated. “We have to break down the barriers holding back women and girls around the world.”

Some 5000-plus attendees were at the conference with pro-abortion and population control groups among the presenters and organizers, such as the Center for Reproductive Rights, Bill and Melinda Gates Foundation, International Planned Parenthood Federation, Ipas, Marie Stopes International, the United Nations Population Fund and Population Services International.

Abortion was a conference discussion and side event topic, and The Women Deliver Award for Courage was scheduled to be presented at the event to Planned Parenthood President Cecile Richards.

Clinton's speech, titled A Purpose-Driven Life, was labeled as “A thought-provoking video from Former U.S. Secretary of State Hillary Rodham Clinton on women's rights as human rights, and how to translate that vision from the 1995 World Conference on Women in Beijing to action in the 21st century.”

The Democrat presidential frontrunner had pushed the United Nations to define abortion as a human right as First Lady at both the 1994 International Conference on Population and Development and the 1995 Beijing women’s conference.

“Two decades ago at the U.N. fourth world conference on women in Beijing we came together and said with one voice that women's rights are human rights. And the gains we've made since then prove that progress is possible,” said Clinton last week. “But as you all know too well, our work is far from finished.”

Clinton has a consistent and longtime record of fervent support for abortion.

While a U.S. senator from New York, she voted against ending partial birth abortion, the Unborn Victims of Violence Act, parental notification if a minor crosses state lines to have an abortion, and she also supported embryonic stem cell research.

Clinton told the UN’s International Women’s Day audience in 2014 it was a “bedrock truth” that abortion restrictions hinder human progress, and any attempts to improve women’s rights must start with increased access to contraception and abortion.

Earlier this year, she said U.S. taxpayers should pay for abortion-on-demand.

During her time as Secretary of State, Clinton had said she was “in awe” of Margaret Sanger, founder of Planned Parenthood.