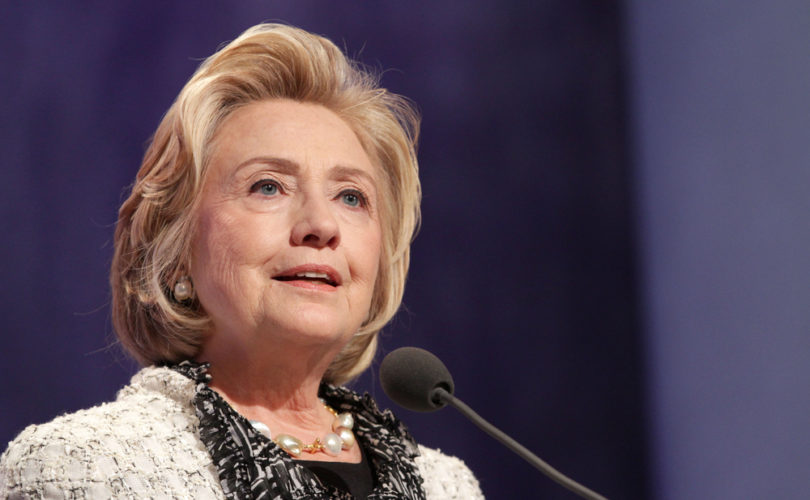 Georgetown University once again hosted former Secretary of State Hillary Clinton for a prestigious engagement on campus. The most recent event was held by the Georgetown Institute for Women, Peace and Security (GIWPS) on December 3, and is the latest of several events at which the Jesuit university has hosted Clinton, despite her staunch opposition to Catholic teaching on key issues.

Clinton, who is a consistent supporter of legal abortion and “reproductive rights,” opposed a federal ban on partial-birth abortion in 2007 and was the 2009 recipient of Planned Parenthood’s Margaret Sanger award, which is the organization’s “highest honor.”  According to On the Issues, she was “Recommended by EMILY’s List of pro-choice women” and received a 100 percent rating by NARAL for her voting record as a senator in support of abortion.

The number of students present at the event was reportedly less than expected due to classes and exams. “I know a lot of people had classes during that time,” a student told Georgetown’s student newspaper, The Hoya. “For some, it’s a ‘been there, done that’ kind of thing.”

The Hoya specified that Clinton “has spoken on campus two times this semester and four times since fall 2013.” Additionally, “Gaston Hall filled to capacity at her three previous speaking events,” the article noted. Clinton even began her speech “by joking that she’d been to Georgetown more in the last couple of years than her husband, who is an alumnus,” The Washington Post reported.

“Secretary Clinton’s visits to Georgetown are always met with great enthusiasm here,” University spokesperson Stacy Kerr reportedly told Business Insider. “She was here four weeks ago and students lined up overnight for that visit and we had to turn people away due to the interest.”

In February, The Cardinal Newman Society reported on Georgetown’s decision to present the annual Hillary Rodham Clinton Awards for Advancing Women in Peace and Security. The University hosted Clinton again in October of this year for a talk. Additionally, the Society reported in 2012 that Clinton teamed with UNICEF to kick off a conference at Georgetown.