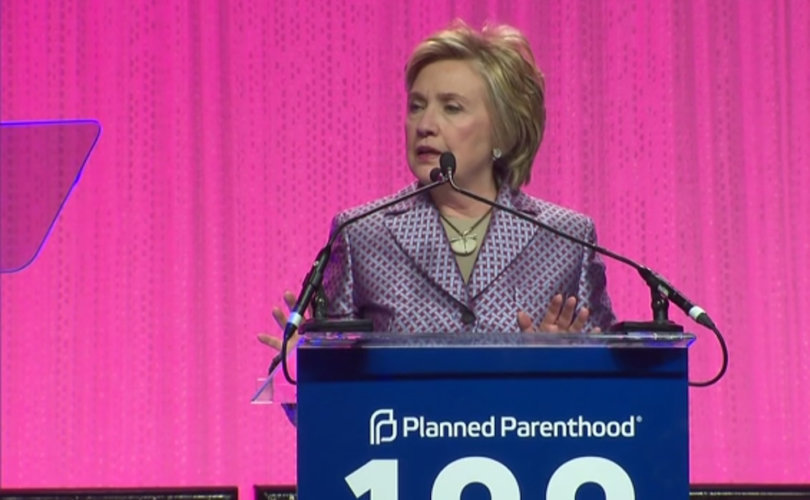 NEW YORK, May 3, 2017 (LifeSiteNews) – Hillary Clinton said supporting abortion is “the right and moral position to take” and referenced a new Hulu series about a dystopian, fundamentalist America while accepting an award from Planned Parenthood at the abortion company's 100th anniversary gala on Tuesday.

“Protecting access to the full range of reproductive healthcare,” a euphemism for abortion, is a “core economic issue,” she said.

“Women in every corner of our country understand that intimately,” Clinton continued. “And anyone who wants to lead should also understand that fundamentally, this is an issue of morality. I wish it were common ground, but I know for sure it is higher ground. And I believe, as you do, that trusting and valuing women is the right and moral position to take.”

The former presidential candidate called for respecting those who disagree with abortion on demand – but then implied that being pro-abortion is “the only right approach.”

“I believe we can and should respect deeply held beliefs of our friends, our neighbors, our fellow citizens, even if they differ from our own. That's what should make America, America,” she said. “But it is possible to do that while holding firm to what we know is the only right approach in our diverse democracy. Oh, yes, let's respect people's convictions, but never back down from our commitment to defend the ability of every woman to make these deeply personal decisions for herself.”

She mentioned, without naming President Trump, that “this administration wants to appoint someone to lead our nation’s family planning program who doesn’t believe in birth control.” Clinton was apparently referring to Trump's appointment of Teresa Manning as deputy assistant secretary in the Office of Population Affairs of the Health and Human Services Department (HHS). Manning, a law professor with a pro-life background who has questioned the effectiveness of contraception, will oversee the country's Title X “family planning” contraception program.

The dystopian show Clinton mentioned is the new Hulu series The Handmaid's Tale. It takes place in a future United States where women are second-class citizens and certain women are forced to bear children for rich men and their wives. Love and procreation are separated. This dystopia is run by a fundamentalist religious sect.

“Gilead’s 'handmaids,' including protagonist Offred, represent womanhood reduced to sexuality,” Gracy Olmstead explains at The Federalist. “Due to the declining birth rate among humanity (driven, it’s suggested, by an environmental decline caused by chemical and nuclear poisoning), women who are still fertile are separated from the rest of female kind, and become sexual slaves of the political elite. They’re meant to produce babies. That’s their only salvation, their only hope for life and happiness.”

“But the handmaids’ babies (if they’re lucky enough to give birth) are not their own: they belong to ruling class women, a stratum of wives who are seemingly powerless, without vocation or purpose in their world,” Olmstead writes. The story is “reductive of the human person across all pillars of society.”

“I’m not suggesting this dystopian future is around the corner, but this show has prompted important conversations about women’s rights and autonomy,” said Clinton. “In The Handmaid’s Tale, women’s rights are gradually, slowly stripped away. As one character says, 'We didn’t look up from our phones until it was too late.' It is not too late for us, but we have to encourage the millions of women and men who support Planned Parenthood’s mission to keep fighting.”

“Politicians in Washington are still doing everything they can to roll back the rights and progress we've fought so hard for over the last century,” said Clinton. “I mean, could you believe those photos of men around that conference table, deciding how to strip away coverage for pregnancy and maternity care?”

She seemed to embrace a binary notion of gender, something the left regularly criticizes, when she likened men and women to dogs and cats.

“I gotta say, my favorite internet meme about this were the dogs sitting around the table discussing feline care. I found that so on point!” she said.

Shonda Rhimes, the creator of the television show Scandal, was also honored at the gala. Scandal infamously set a character's abortion to “Silent Night.”

“Abortion is profoundly anti-woman, and while some will celebrate Secretary Clinton’s achievement award … we instead grieve the fact that approximately one-sixth of our nation is not with us today because of the very work of Planned Parenthood,” said Jeanne Mancini, president of March for Life.

Planned Parenthood is “a billion-dollar business and the single largest provider of abortions in the United States – performing over 320,000 abortions annually” and responsible for approximately a third of the 58 million deaths by abortion since 1973, Mancini said.

The evening was “underscored by an unspoken sense of loss,” Gupta wrote. “The people gathered in this room, at this gala, should have been the victors ushering in a watershed moment in women’s rights: after 100 years since Planned Parenthood’s inception, a woman who had put issues like paid leave, abortion, and equal pay at the forefront of her campaign could have become the first female president of the United States of America.”

The speakers “had one goal,” according to Gupta: “to drum up support for the organization, both financially and emotionally.”