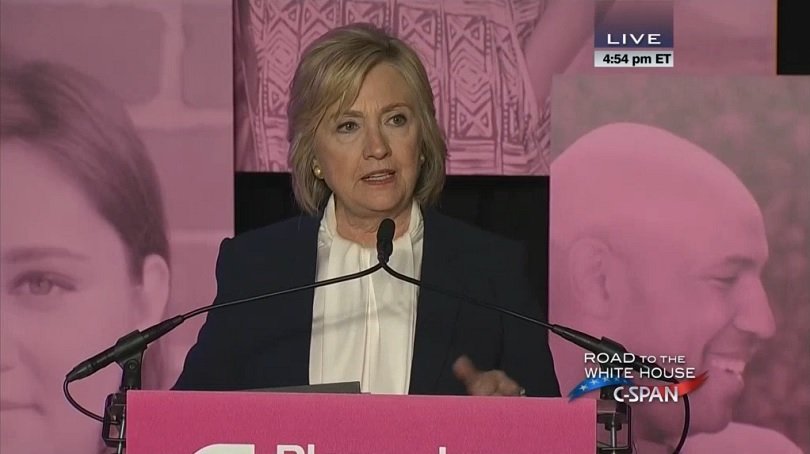 While accepting the Planned Parenthood Action Fund's first-ever endorsement during a contested primary, Clinton told a crowd in New Hampshire that she believed the “right” to abortion should strike down virtually every restriction on abortion in all 50 states.

“I believe we need to protect access to safe and legal abortion, not just in principle, but in practice,” she said. “Any right that requires you to take measures to access it, is no right at all.”

She argued the unfettered “right” to abortion-on-demand is not met “when patients and providers have to endure harassment and intimidation just to walk into a health center; not when making an appointment means taking time off from work, finding child care, and driving half-way across your state; not when providers are required by state law to recite misleading information to women in order to shame and scare them.”

“And,” she added, “not as long as we have laws on the books like the Hyde Amendment, making it harder for low-income women to exercise their full rights.”

The Hyde Amendment, authored by Rep. Henry Hyde and signed into law by President Jimmy Carter in 1977, forbids federal taxpayer dollars from funding abortion, except in the cases of rape, incest, or to save the life of the mother.

The former first lady's words echo the official stance of the 2012 Democratic Party platform, which favors unrestricted abortion-on-demand “regardless of ability to pay.”

Her call was quickly picked up by abortion advocacy organizations. The National Abortion Funds tweeted:

Now's the time to send @POTUS a strong message before his final #SOTU #BeBoldEndHyde https://t.co/ltUsBYkaD1 pic.twitter.com/H6Og6zJpmN

The issue of funding or defunding abortion represents a cavernous gulf separating the two parties. Every Republican presidential candidate has said he, or she, will defund Planned Parenthood upon taking office. Many have done so in their own states.

“Not only is she opposed to defunding Planned Parenthood, Hillary Clinton has now argued that taxpayers have an obligation to support abortion at any time, for any reason. This is the most dramatic pro-abortion position espoused by a leading political figure to date, and it changes the abortion debate,” said Marjorie Dannenfelser, president of the Susan B. Anthony List.

Referring to Bill Clinton's formulation of his views on abortion, Dannenfelser said, “‘Safe, legal, and rare,’ is long gone.”

The new Democratic orthodoxy is radically out-of-step with the American people, who favor existing – and additional – regulations on abortion. Numerous polls show between 20 and 25 percent of the American people favor unrestricted abortion-on-demand.

As high as 70 percent of Americans oppose taxpayer funding of abortions, according to a 2015 Marist/Knights of Columbus poll.

“If Mrs. Clinton wants to use this election to go to war against this longtime consensus, we welcome the opportunity to engage and expose her. We are confident the American people will reject this level of extremism at the ballot box,” Dannenfelser said.

Report: Taxpayers have spent hundreds of thousands of dollars on aborted babies’ remains