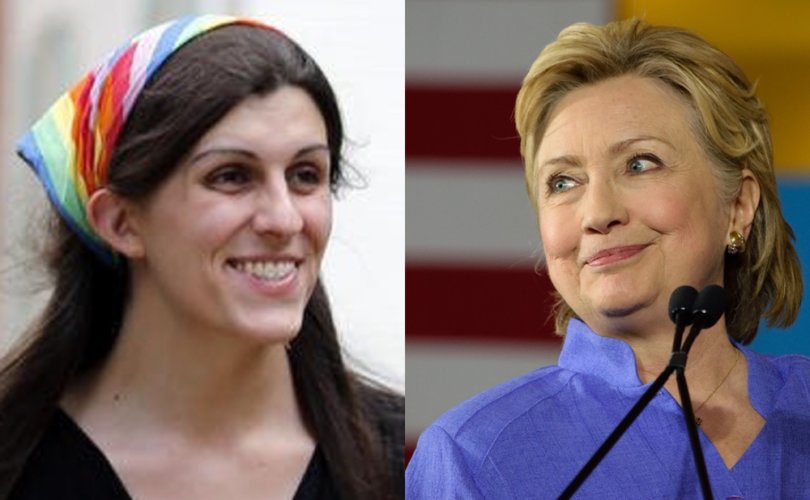 “In honor of #InternationalWomensDay, I want to celebrate some of the women and girls who inspire me every day,” the former Secretary of State wrote in a series of tweets.  “These women resist inequality, insist on a better world, persist against all odds, and enlist others in our shared fights.”

On Clinton's tweeted list of inspiring women was Dan Roem, a man who declared himself a “woman” in 2013 and ran for a seat in the Virginia state House last fall. Clinton praised Roem, saying he “put a huge crack in the glass ceiling last November, then got right to work to serve her constituents.”

@pwcdanica put a huge crack in the glass ceiling last November, then got right to work to serve her constituents. pic.twitter.com/BHsTLTI8c4

International Women's Day began in 1909 in New York, and is now celebrated every March eighth.

On Snapchat, the former First Lady sent a Women's Day message to “fight” and “resist,” because “Every issue is a woman's issue.”

“There’s a lot to fight for: Planned Parenthood, education, healthcare, jobs,” Clinton challenged in a brief video.  “Every issue is a woman’s issue. So stand up, resist, run for office, be a champion.”

In honor of Women's Day, Clinton also spoke at the Girls Inc. luncheon in New York City on Tuesday.  The organization awarded Clinton with their annual “Champion for Girls” award.

“Let us hope there is a wave of young women running for office in America, and let’s be sure we support them in every way we can,” Clinton said. “Let’s help them shatter stereotypes.”

During her failed presidential campaign, Clinton faced many controversies, including funding for her and her husband’s foundation, her inaction as Secretary of State when the U.S. embassy in Benghazi was attacked by Islamic terrorists, killing four Americans, and her illegal use of her family’s email server for top-secret government communications.

In honor of Women’s Day First Lady Melania Trump and First Daughter Ivanka Trump both tweeted, but their empowering sentiments were poorly received.

Today we come together in recognition of women at home & around the globe. We celebrate women’s achievements, past & present, & pledge to empower women to reach their full economic potential for generations to come. When women thrive, we ALL succeed. #InternationalWomensDay

The media, however, paid more attention to negative responses, such as one person who tweeted back, “If actions speak louder than words then you need to sit this one out.”

The First Lady announced she will be giving out Women of Courage awards March 21.  Again, mainstream media only picked up on negative reactions.